Okung’s new contract with the Broncos has zero guaranteed money and is unlikely to be renewed after 2016. It says a lot about how little the Seahawks wanted him back. Such is the churn of roster life in the NFL. 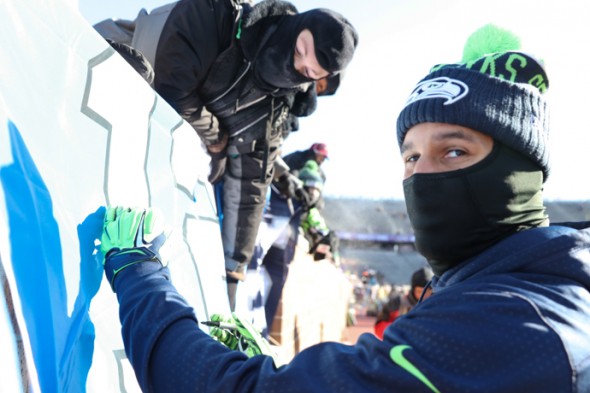 Jermaine Kearse signs an autograph before the coldest game in Minnesota’s football history. The first playoff game last season took a lot out of the Seahawks. / Drew McKenzie, Sportspress Northwest

If I’m Russell Okung’s agent today, I could see getting fired. The new deal for the former Seahawks stalwart with the Denver Broncos gives Okung in 2016 a $1 million workout bonus, a $2 million salary, a $2 million bonus for playing a game, then up to $3 million in incentives, according to USAToday.com.

Zero guaranteed money at signing. No guaranteed money beyond 2016, even though there’s $48 million over the next four seasons that are club options. The Super Bowl-winning Broncos aren’t paying any offensive lineman $12 million in 2017. Only four NFL tackles earned that much in 2015, and none of them played for a good team.

Okung probably needed to stick to his day job.

As Seahawks fans know by now, Okung made the unusual decision months ago to represent himself in free agency, saving the three percent cut typically given agents for negotiating the deal. Not sure the savings were worth it.

It’s hard to say if an agent could have improved the deal, because at least part of Okung’s ambitions were thwarted by injury — a shoulder dislocated in the first quarter of the season’s final game at Carolina.

He told reporters in Denver Thursday that he should be a full go by May or June, and that he was pleased with the outcome of negotiating his own free agency.

“I don’t necessarily know if there would be anything different about (using an agent),” he said. ” I think that other (NFL players), (an agent) is for them. In terms of me, it wasn’t for me. I got the deal that I wanted.”

If what he wanted was to match his Seahawks salary in 2015, he might pull off that feat. By meeting those listed milestones to reach $5 million, plus $3 million in other playing-time incentives, his total for 2016 could be $8 million, about what he made in his sixth and final year with the Seahawks.

But Okung has never played 16 games in a single season.

No one is more aware of that than Seahawks GM John Schneider, who clearly did not make a substantive offer to keep Okung, despite the the fact that RG J.R. Sweezy already had been lost in free agency to Tampa Bay.

By being the Seahawks’ free agent, Okung by rule had only Seattle that he could talk to prior to the opening of free agency March 9. An agent could have helped him understand that there were numerous top-tier tackles on the market, as well several likely to go in the first round of the April draft. And that his reported desire for a multi-year deal around $10 million average annual value was not realistic, even though at 28 he was not old by tackle standards.

But he chose not to seek such advice, which could have included a recommendation to listen carefully to the verb tense coach Pete Carroll chose when discussing Okung in his final press conference after the season.

“He’s been a great factor in our team,” Carroll said. “Really sick to see him get hurt in that game. It’s a very unusual accident that happened.

“He’s been a leader, he’s been stellar for years. Really consistent. He’s been a great kid.”

All verbs in the past tense.

The Seahawks knew he would move on, and were satisfied enough with their chances in the marketplace to not bother with a counter to Denver’s modest offer.

For a guy who gave a lot and drew much respect from his teammates, the exit seemed unworthy. But the NFL is nothing if not cold.

The Seahawks might have afforded what the Broncos paid him; they just didn’t want him any more.

What the Seahawks do want remains unclear. One lineman the Seahawks hired in free agency,  J’Marcus Webb (two years, $5.75 million), has had an undistinguished, six-year  NFL career, mostly at guard.  The other, Bradley Sowell ($1.4 million, one year), seems destined to fill the departed Alvin Bailey’s role as a two-position backup.

The line has three returning vets, C Patrick Lewis, LG Justin Britt and RT Garry Gilliam. All three are likely below the NFL average at their positions. One popular theory is that Gilliam will move to Okung’s old spot, Britt would replace Gilliam, Webb would step in at one guard and second-year pro Mark Glowinski would step up to the other guard.

Whether that amounts to an upgrade is debatable.

For sure, it’s a low-cost solution full of moving parts that suggests another slow start for the offense. With one difference — no C Drew Nowak. The biggest personnel mistake of Carroll’s tenure was in thinking that an undrafted free agent and former defensive lineman could step in for Max Unger and start at the NFL’s most complex line spot.

The coaches knew they blew it a few weeks in, but by the time Lewis replaced Nowak and the Seahawks re-jiggered the passing game, five games had been lost and the Seahawks were destined for the road in the playoffs.

As fate would have it, that meant playing the coldest football game in the history of Minnesota, where cold was invented.

That game took a lot more out of the Seahawks than they will ever admit, leaving them without an edge in Charlotte, bringing about the end of the Quest for The Lost Yard.

So getting off to a better seasonal start is likely a priority. They still have time for upgrades, either via free agency, trades or the draft. It’s doubtful the Seahawks have a set lineup in mid-March.

In fact, set rosters don’t happen with the Seahawks, or any NFL team.

The Seahawks’ roster churn is so steadily intense that they have turned over 62 percent of those who played in the 43-8 win over the Broncos is Super Bowl XLVIII, including all of the offensive line.

Below is the roster of the Super Bowl participants. In red are 28 of the 45 who departed, and their fates: