A pair of penalties — one earned, one not — was enough to help the Vancouver Whitecaps nail Seattle to a 2-1 loss at home, the first 0-3 start in club history. 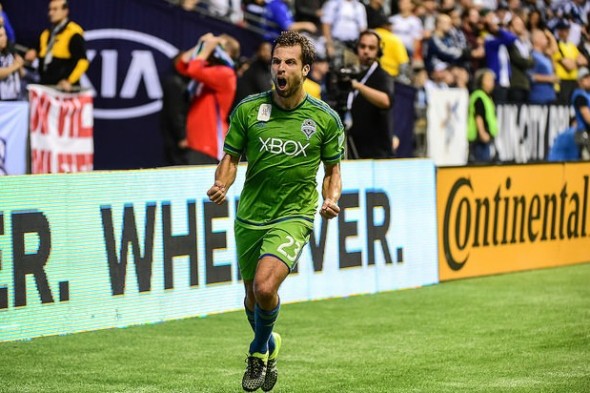 Against the Vancouver Whitecaps Saturday night at CenturyLink Stadium, the Seattle Sounders did plenty right and just enough wrong to drop their third straight match. Seattle conceded two penalties of differing legitimacy and was unable to find the net from open play in a 2-1 loss that left the franchise 0-3 for the first time in its history.

“I’m not pleased with the result,” said Sounders coach Sigi Schmid. “It’s a game that I thought we controlled the majority of . . . it seems like right now we’re not catching a break.

“It’s not like I can say the other team is steamrolling us, the effort is good . . . I can’t walk into that locker room and say ‘you guys didn’t put an effort in.’ I can’t walk in and say,  ‘You guys didn’t control the pace of the game,’ because that would be lying to them.”

The scales slanted against Seattle in the 10th minute. Vancouver’s Christian Bolaños raced into the box as Joevin Jones sprinted toward him. Despite a lack of visible contact, Bolaños wound up on the turf. Referee Mark Geiger pointed to the spot, earning the ire of the 40,012 in attendance.

Vancouver captain Pedro Morales neatly slotted the ball into the left side of the net to give the visitors the lead.

Andreas Ivanschitz answered early in the second half, lofting a free kick from 22 yards out into the upper left hand corner to pull the score level in the 52nd minute.

The Whitecaps weren’t done, however. In the 74th minute, a Vancouver counter attack set up Blas Pérez up with the ball and a clear line to the net. Sounders center back Chad Marshall slid in, but struck Pérez before he got the ball, leading to another penalty. Morales converted again low to the left side for the game winner.

Center back and acting captain Zach Scott verbally went down with the ship after the match, saying he felt partially responsible for both goals.

“At this point you have to do a little soul-searching and figure out if you’re doing enough to help the team win games,” he said. “From a personal standpoint, I’ve got to do better. Maybe I could have shifted over and helped both of those guys so they didn’t feel like they had to go to ground.”

Scott was displeased with Pérez on the second penalty, claiming that the Panamanian midfielder unfairly drew the contact from Marshall.

“I don’t know if you want to hear what I’m going to say about Perez, I’ll probably get fined,” said Scott. “If there’s two things I do before my career is over, one is making sure he never gets another goal and (number two is to) beat Portland one more time.”

If the wind has gone from the Sounders’ sails, Scott didn’t seem to think so. Still, Seattle  must find the right balance of offense and defense. The present imbalance, Vancouver coach Carl Robinson said, created the recipe for both penalties.

“We know they’ve got two excellent fullbacks that like to attack,” said Robinson. “One would get forward and load you up with numbers because of their forward-thinking play, but it leaves the two center backs a little bit isolated.”

The isolation and Vancouver’s speed forced the Sounders into making the penalized challenges.

The Sounders dominated possession, holding the ball for 60 percent of the game, and swung in 22 crosses from open play, but generated only five shots on target.

Schmid said that communication and spacing kept the Sounders from finding the net.

“A couple of times we got in each other’s way in the box,” he said. “We had two players challenging the same ball. There was one cross where Clint (Dempsey) was waiting for the header, and Valdez ran into him. There was another when (Nelson) Valdez and Chad (Marshall) went up for the same ball.

“The crosses weren’t missing by much. We worked on that this week and we’ll continue to work on that. I didn’t think we were sending hopeful balls in. That final execution just isn’t there right now.”

The most egregious miss belonged to Dempsey, who failed from 12 yards out on a mostly open net after Jones cut a cross back on the ground while surging towards the goal line. Dempsey’s first-touch shot curled just wide of the post, causing the veteran forward to collapse to his knees in disbelief as the ball—and the game—rolled just wide.

Schmid was frustrated, unsure why his talented team is still struggling to generate promising scoring chances, and why speedy teams are still carving paths through his back line.

What Schmid was sure of, was that changes in outcome would have to come fast after the team’s break from league play until April 2 for the international window.

“It’s a results-oriented business. I know that as well as anybody,” said Schmid. “At the end of the day, we’ve got to start getting some results or quite a few of us could be looking for new jobs.”