Facing fifth-ranked Maryland on their home court, the Huskies, behind 32 points from Kelsey Plum, stunned the seventh-seeded Terrapins 74-65 Monday to move to the Sweet 16 Friday in Lexington, KY. 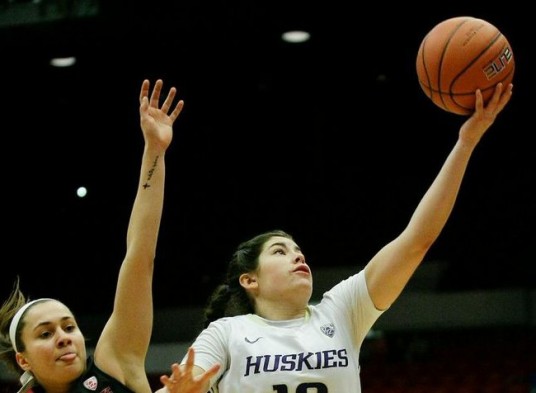 Behind Kelsey Plum’s 32 points, the Huskies pulled off one of the greatest upsets in Washington women’s basketball history by defeating powerhouse Maryland 74-65 Monday night on the Terrapins’ home court in College Park, MD., in the second round of an NCAA regional.

Maryland (30-4), the No. 2 seed and ranked fifth nationally, is the two-time defending Big 10 Conference champion. The Terps have appeared in the past two Final Fours. But the Huskies rallied from a halftime deficit with a 20-8 third quarter to stun the heavy favorites, who were riding a 10-game winning streak.

Plum was 8-for -24 from the field but cold-blooded at the free throw line with 13 of 14. Plum is fifth on the Pac-12’s all-time scoring list. The Huskies had 20 points from Talia Walton.

Center Chantel Osahor had nine points, including a rare set-shot three-pointer, and 14 rebounds, helping give UW a 40-38 rebound advantage over the bigger Terps. Osahor anchored a defense that held Maryland’s inside scorers Brionna Jones and Malina Howard to a combined eight points.

Some bad news for the Huskies was the loss of Mathilde Gilling, who was carried off the court in the fourth quarter with an apparent knee injury. Gilling has been the only substitute coach Mike Neighbors has used down the stretch of the season.

Gilling’s layup with 6:47 left in the third quarter, on an assist from Plum, gave Washington a 39-38 lead, and the Huskies would not give up the lead the rest of the way.