Schneider: Chancellor will return to Seahawks

Seahawks GM John Schneider Tuesday shot down rumors that the team planned to move on from Kam Chancellor, saying the All-Pro safety would return in 2016. 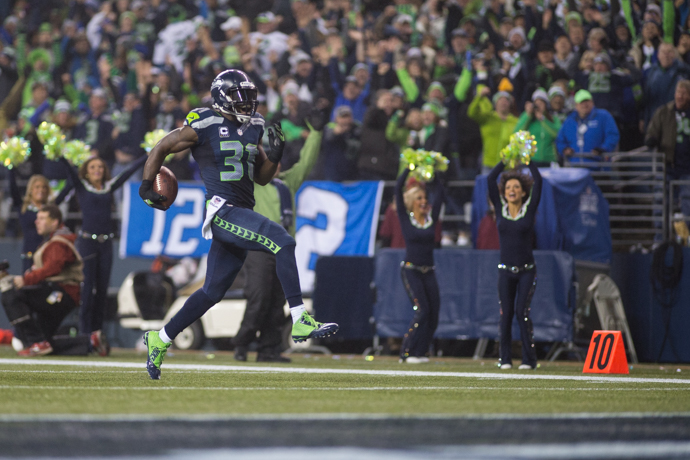 With a 90-yard pick-six, Kam Chancellor had a big time against the Carolina Panthers a year ago;.. / Drew McKenzie, Sportspress Northwest

General manager John Schneider Tuesday shot down speculation that the Seahawks planned to move on from four-time Pro Bowl safety Kam Chancellor. Speaking to reporters at the annual NFL meetings in Boca Raton, FL., Schneider insisted that Chancellor “will absolutely be back in 2016.”

The 28-year-old Chancellor, who enters his seventh season with the Seahawks, was one of the biggest stories in the early part of the 2015 season when he held out of training camp and then the first two games of the regular season (both losses) in a dispute over the four-year, $28 million contract he signed prior to the 2013 season.

The Seahawks refused to re-work in any fashion Chancellor’s deal. With no other option, he returned to the team, prompting speculation that he would seek a trade following the season.

Chancellor himself debunked rumors that he would leave last week on Instagram, calling Seattle his “second home” while adding that he “didn’t plan on going anywhere unless some higher power places me elsewhere.”

Schneider didn’t elaborate on why he felt so certain Chancellor would return next season, but told ESPN’s Sheil Kapadia that, “Kam is an extremely prideful, powerful person. There’s a lot of family things that stay in- house. That’s one of them. I can’t speak more highly of a guy.  (The holdout) was a tough, though thing for everybody to go through last year, so I’m glad he feels that way.”

The Seahawks selected Chancellor in the fifth round (133rd overall) of the 2010 draft out of Virginia Tech. Chancellor has started 72 of 88 games, recording 354 tackles and 10 interceptions.

Chancellor produced one of the biggest plays of his career during a 31-17 victory over Carolina in the 2014 playoffs, returning a Cam Newton interception 90 yards for a touchdown, the longest such play in Seattle’s postseason history.