Seahawks GM says at NFL meetings that no more cap space is available for a big signing, and that Garry Gilliam and newcomer Bradley Sowell are likely to compete to succeed Russell Okung. 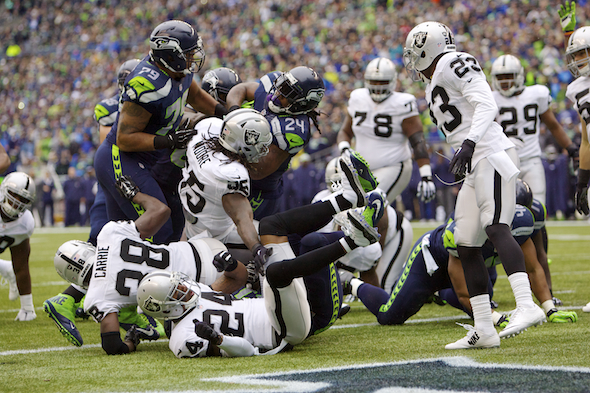 “It’d be a good battle between Gilliam and Sowell,” Schneider told the Seattle Times after being asked who would start right now. That was the first public confirmation of a plan to move Gilliam, who played tight end at Penn State, to the left side. Sowell, a free agent who started 12 games at left tackle for Arizona in 2013 but barely played the past two seasons, seems like the back-up.

Schneider also told reporters at the NFL meetings in Boca Raton, FL., that the Seahawks are close enough to the salary cap that acquiring any more big salaries is highly unlikely.

“Where we are at right now,” he said, “we can’t be doing anything. We just have to be very responsible.’’

That explains why the Seahawks were never serious about returning Okung to Seattle. He finished a six-year stint making $48 million, but his injury history combined with a probable request from the Seahawks to take a pay cut meant he was done here.

After visiting three other teams, Okung signed a non-guaranteed deal for $5 million with Denver, plus four years at $48 million at the team’s option, which the Broncos are unlikely to exercise.

There was no effort made once Okung began his visits elsewhere.

“Not really,” Schneider said, “because he made a lot of trips (to visit other teams) really quick. So whenever that happens you know people have strong interest.’’

He said Okung’s decision a year earlier to represent himself in negotiations, instead of hiring an agent, made no difference.

“I don’t think it affected it,’’ Schneider said. “Russell is a very intelligent person. He has his personal beliefs. We had a good talk before the season started, so we knew that he was going to be representing himself and Russell knew where we were coming from.

“It’s just hard — those conversations are hard to have. Russell was the first player we selected (in 2010) so that was difficult.’’

Losing Okung and RG J.R. Sweezy, who left in free agency for Tampa, means Seattle needs another new starter. Apparently that will be J’Marcus Webb, a free agent signed from Oakland for two years and $6 million. He likely will start at Gilliam’s old spot on the right side, while second-year vet Mark Glowinski will advance to Sweezy’s position. LG Justin Britt and C Patrick Lewis, for now, will hold their spots.

“I think signing our two guys in Sowell and Webb, that was big for us,’’ Schneider said. “They are kind of unique signings, kind of prove-it signings.”

Of Gilliam’s move, Schneider said, “He’s a heck of an athlete. He’s played there in college, too, and he’s just such a good athlete. He can play wherever you want. He can play tight end — you have seen him catch the ball. He’s extremely talented, as is Sowell. Sowell is very quick and athletic and again very, very confident in his abilities.’’

The Seahawks have nine picks in the draft that begins April 28, so the Seahawks could find more competition for O-line jobs there.

Or they could ask a few D-linemen to visit the other side.