Washington freshmen Marquese Chriss and Dejounte Murray declared for the NBA draft Wednesday, two days after the Huskies were eliminated from the NIT. 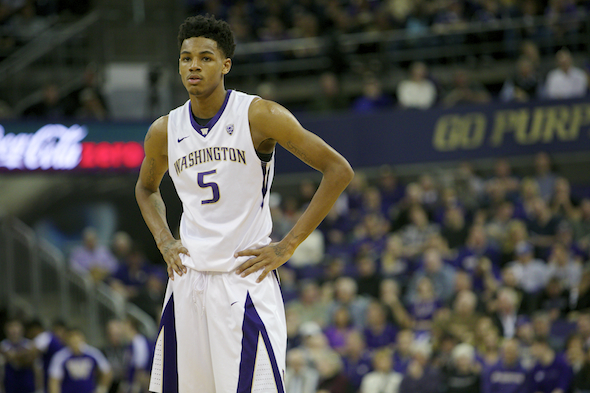 Washington freshmen Marquese Chriss and Dejounte Murray are officially one-and-dones. The University of Washington men’s basketball team announced Wednesday that the two will declare for the 2016 NBA draft and not return to the program.

The news comes two days following Washington’s exit from the NIT in a 93-78 loss to San Diego State University.

Murray, a Seattle native who attended Rainier Beach High School, averaged 16.1 points per game during his time with the Huskies, including 34 in a win over Arizona State. Murray posted this tweet:

“I am blessed and humbled to announce I am declaring for the 2016 NBA draft and hiring representation. I would like to thank Coach (Lorenzo) Romar, Uudbb and everyone else who has helped put me in this position. I am excited for the journey ahead and feel truly blessed.”

The 6-foot-9 Chriss, after a slow start, finished the season averaging 13.7 points per game, and had six double-doubles. He came to Washington from Pleasant Grove High School in Sacramento.

“This journey is more than I ever could of expected. I love all my brothers and wouldn’t have wanted to go to war with anyone else. Washington and Coach Romar believed in me before anyone else and I am forever grateful to them for that. I’ve enjoyed every minute I’ve spent at UW and all the great times that have been and memories are something that no one can take away. I am extremely blessed and happy to announce that I am going to take the opportunity that I was given by the grace of God and enter the 2016 NBA draft.”

Romar said Tuesday that he had been give notice that Murray and Chriss were likely first-round draft picks, and Wednesday he elaborated on their defections.

“Those guys worked hard all year and had phenomenal seasons. Coming in I don’t think anyone thought they would have good enough seasons and do as much to where they could after a year be first-round draft choices. It seems like that’s the case.

“You got to give them a lot of credit for that. I don’t think they came in our program with one foot in and one foot out. They totally bought in to what we were doing. Love them for that. Love coaching those guys. They were great. Even though they were only here for a brief time, they’re going to always be Huskies and we’re going to support them and pull for them 100 percent.”

Washington finished 9-9 in Pac-12 play and 19-15 overall, missing the NCAA tournament for the fifth consecutive year.

The loss of the two starters is crucial for Romar, especially after the graduation of senior Andrew Andrews, the Pac-12’s top scorer.

Murray and Chriss, both of whom are projected to be selected among the first 15 picks June 23, are Washington’s first one-and-dones since Tony Wroten, who went to the Memphis Grizzlies with the 25th overall pick in the 2012 NBA draft.

Wroten, the Pac-12 Freshman of the Year, subsequently played for, and was waived by the Philadelphia 76ers and also played in the NBA Developmental League. Wroten is a member of the New York Knicks, but is rehabbing an injury.

The only other player in the Romar era who bolted UW after one season was center Spencer Hawes, a freshman in 2007. He since has had an eight-year career with five teams and is currently a backup with the Charlotte Hornets.

Other UW players who left Romar’s program early for the NBA are Nate Robinson, Isaiah Thomas and Terrence Ross. Ross made first-team All-Pac-12 in 2012 and was the eighth overall pick in that year’s draft. He has mostly been a reserve in his three seasons with the Toronto Raptors.