Once they flashed a few games of promise, Marquese Chriss and Dejounte Murray were so done with college basketball. If they make it to a second contract, the cash in the NBA will be astounding. 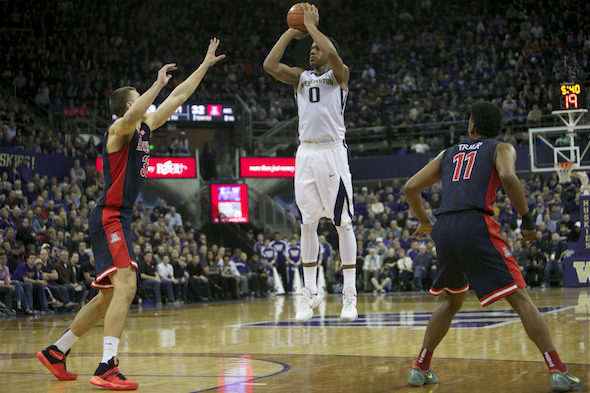 Marquese Chriss will get two or three years of apprenticeship in the NBA, then a shot at some giant money. / Drew Sellers, Sportspress Northwest

The Huskies had no chance at keeping Dejounte Murray and Marquese Chriss. Particularly this year. Their decisions to go pro after one season had nothing to with the Huskies’ record, coach Lorenzo Romar’s coaching, the current half-decade absence for the tournament or the absence of a Louisville-style party dorm.

It has much to do with the expiration of the NBA’s current television-rights deals ahead of the 2020-21 season.

That’s when it would be a splendid time to be a free agent.

Should both players be drafted in the first round June 23, which is the conventional wisdom, and complete four seasons on their original contracts, they would be free agents at the time when the NBA anticipates a massive windfall of increased revenues — unless, of course, the NBA before that collapses in a fetid pile of its own hubris.

Barring that, Murray and Chriss would be beneficiaries of a huge increase in the players’ share of the NBA’s revenue pie. They would eligible to receive, if a club chose, a maximum contract under the peculiar rules of the NBA’s collective bargaining agreement.

What does that mean? This year’s maximum for a player between zero and seven years experience is $16.4 million. By 2021, that number might be Donald Trump money.

If all this seems a little bewildering, it might help to look at this chart from realgm.com that breaks down the rookie pay scale that is slotted by the CBA for draftees over their first four years.

Clubs and players can negotiate to pay up to 120 percent above those figures, or as little as 80 percent. But wherever Murray and Chriss end up on this scale, it isn’t nearly as good as draftees in the NFL or MLB.

Both union and management in the NBA want the big money going to the veterans good enough to get a second contract. By jumping to the league now, Murray, Chriss and their fellow first-rounders — only the contracts of first rounders in the NBA are fully guaranteed — are situated perfectly to benefit first and best when the stupid money gets ultra-stupid.

Whomever Murray and Chriss choose to represent them will know all about this stuff and will make it plain, if they haven’t done so months earlier, clandestinely.

So weighing these prospects against the opportunity to play East Squalor A&M next December at Hec Ed . . . well, it was never hard to begin with, and became real easy this time.

As to the question of whether the two gone Dawgs are of the proper caliber to be first-rounders, it really doesn’t matter for the first year or two. Both will be on the bench as 19-year-olds, which may not be a lot of fun but saves some tire tread when playing time becomes important in years three and four.

There was nothing to be said or done by Romar to dissuade them from the screaming logic of financial math. In an interview Tuesday on 950 KJR radio with Dave Mahler, Romar said he was told recently by unnamed NBA personnel that both players were likely first-rounders.

Asked what he would say to players about staying, he said simply, “It’s up to them.”

That’s the beauty of one-and-done for players, and the nightmare for big-time college basketball programs.

Now 10 years old, one-and-done has proven to be great for the NBA — no more scouting high schools — and lucrative for two or three handfuls of U.S. collegians. For the schools, it means a constant churn of rosters that includes the transfers of players with eligibility remaining in pursuit of more playing time/exposure.

The only thing going for big-time college basketball right now is the NCAA tournament, bulletproof entertainment and one of the few things left on national television that is appointment TV.

The rest of college basketball is just a lot of teams running around trying not to be last until the start of the conference tournaments. At least Murray and Chriss had a chance to see China and the Bahamas.

Can’t wait until the NBA expands the Developmental League to include its 353 Division I junior programs.