Mark Few of Gonzaga and Jim Boeheim of Syracuse, long-time friends, will square off in the Sweet 16 of the NCAA men’s tournament Friday night in Chicago. 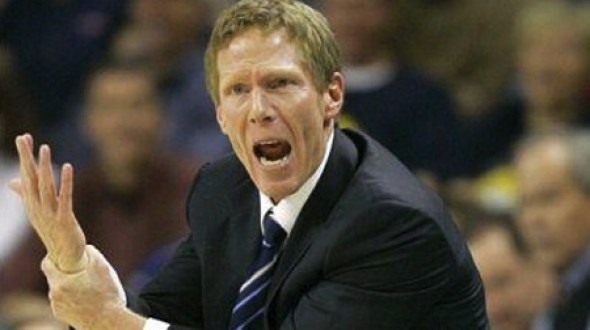 Credit longtime friends Mark Few of Gonzaga and Jim Boeheim of Syracuse for livening things up when the veteran coaches joined their players in meetings with the media Thursday at the United Center in Chicago. The Zags take on the Orange Friday in the Sweet 16 (6:40 p.m., KIRO 7).

Few and Boeheim have nurtured buttoned-down images during long stays at their respective schools, but they opened up when discussing one another prior to their Midwest Region showdown.

“He’s a really, really good guy, man,” Few said. “I wish you guys could see that side of him. He’s not the surly curmudgeon you all think he is.

“He’s funny, he’s witty, he’s a great card player, average fisherman. But there’s some hope there (fishing), some promise there if we ever get him off the golf course.”

Boeheim recalled how the two men grew close during a Nike-sponsored trip for college coaches.

“He jumped into our card game and got his butt kicked, and he took it well,” Boeheim said. “He handled it well. He took his beating like a man. We’ve been really good friends ever since.

“We went fishing a couple times. He’s a world-class fisherman. I can’t hold a candle to him fishing-wise. He’s really good. But we’ve been friends ever since that, and I think he’s a great guy. Obviously, he’s a great, great basketball coach. But he’s a better person.”

Both teams had to scramble to make the tournament after up-and-down regular seasons. Both rely on just six men for the most part. Both have four players averaging 10 or more points per game. Both play quality offense and defense.

Both held their first two tournament opponents under 60 points in runaway wins. Both rank among the national leaders in 3-point shooting percentage defense. Both are led in scoring by a redshirt senior (Gonzaga’s Kyle Wiltjer and Syracuse’s Michael Gbinije) who poses match-up problems with height and ability to score from different spots.

Wiltjer, a 6-foot-10 forward averaging 20.4 points per game, may be the key to Gonzaga’s ability to solve Syracuse’s vaunted 2-3 zone defense. He shoots 43.2 percent from beyond the 3-point arc.

“He’s going to play a big factor in that zone,” Gonzaga guard Kyle Dranginis said. “He can play inside and out. He’s obviously a dangerous shooter, and he can also post up, and he’s fundamentally sound and can score inside. He can score from anywhere.”

Boeheim admits he had his doubts about recruiting Gbinije, a former wing in his first season as a full-time point guard.

“I’d say he’s the most improved player that I’ve had at Syracuse,” said Boeheim, who has been head coach at his alma mater for 40 years.

Two other long defenders and 3-point gunners for Syracuse are 6-6 freshman wing Malachi Richardson (13.1 ppg) and 6-4 senior wing Trevor Cooney (12.8). Inside scoring does not come easy for the Orange.

Most zone teams have trouble with defensive rebounding, and Syracuse is no exception. That could prove fatal against Gonzaga, since 6-11 sophomore Domantas Sabonis ranks among the nation’s best with 11.7 rebounds per game.

Sabonis also averages 17.5 points. NBA draft analyst Chad Ford of ESPN has moved Sabonis up to 17th on his list of potential NBA draft picks this year. Sabonis has not committed to returning to Gonzaga, and ESPN college basketball analyst Dick Vitale says Sabonis might be a lottery pick in this year’s draft.

Wiltjer and Sabonis have powered Gonzaga all season, but the improved play of guards Eric McClellan, Josh Perkins, Silas Melson and Dranginis has been pivotal during GU’s seven-game winning streak.

“We’re playing team basketball right now,” Wiltjer said. “I think we’re just doing a great job of sharing the basketball, and the guards are playing really good. Just shooting open shots, being aggressive, and they’ve been doing a great job just finding us (Wiltjer and Sabonis) down low all year.”

The Orange, playing in the rugged Atlantic Coast Conference, lost five of six games coming into the tournament. Earlier in the season, Syracuse had to deal with Boeheim’s nine-game suspension for improprieties found in the program by the NCAA.

On Friday, the past does not matter. The fact that Gonzaga is favored by four points does not matter. All that matters is the one game that will determine who advances to play Saturday in the Elite Eight against the winner of Thursday’s game between top-seeded Virginia and fourth-seeded Iowa State.