T-birds’ Bow hopes to prove self in WHL playoffs 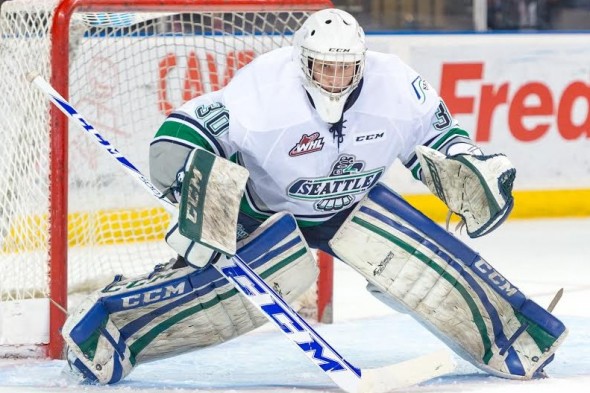 Alberta native Landon Bow has been a key part of the Thunderbirds’ success late in the season. / Brian Liesse, Seattle Thunderbirds

Sitting under buzzing fluorescent bulbs in a small conference room at the Showare Center in Kent, Seattle Thunderbirds goalie Landon Bow doesn’t look or sound like an amateur. That likely has to do with the fact that the 20-year-old has been playing hockey year-round for more than a decade in the hopes of one day skating on NHL ice.

As the playoffs loom in Bow’s final season of eligibility in the Canadian Hockey League, the pressure is higher than ever on Bow to help his team and make his case for a shot at professional hockey.

Shortly after Christmas, Bow was called in to the Swift Current Broncos GM’s office and informed that he had been traded to the Seattle Thunderbirds. The emotional mix of leaving his home for the past four years turned into a happy new year for Bow, however. He’s gone 16-6 with five shutouts since arriving in Seattle, helping the Thunderbirds clinch their first U.S. Division title in more than a decade. At a time when discussions of hockey in Seattle are at a relative high, the Thunderbirds are more relevant than ever.

The Thunderbirds play in the U.S. Division of the WHL, the western branch of the CHL (the Ontario Hockey League and Quebec Major Junior Hockey League comprise the other two branches). The league, populated by players between the ages of 15 and 20, occupies a complicated middle ground between professional and amateur.

In either case, chasing NHL dreams means years of hard work and sacrifice for the young men who choose the CHL as their potential avenue to the league. Players must adapt to long hours and living hundreds of miles from home with billet families. Players have to be tough on and off the ice to make it.

Bow, an Edmonton native, is just one of hundreds of young hockey hopefuls who wind up far from home following dreams of making it big. In Bow’s case, time is of the essence. At 20, Bow is too old to be drafted to the NHL, but his performance since the trade, and the looming playoffs that begin with a best-of-seven series against the Prince George Cougars Friday (7:35 p.m., Saturday at 7:05 p.m.) could earn Bow offers as an unrestricted free agent.

Thunderbirds GM Russ Farwell said that he felt Bow could make it in the NHL.

“If he has a good playoff series, he could get some attention,” said Farwell Tuesday. “I’m sure that there are people watching him with that in mind. He’s had such good numbers . . . He’s really made a step and made a statement his last couple of weeks here.”

Bow’s numbers are impressive. The 6-foot-4, 214-pound goaltender has allowed 1.76 goals per game with the Thunderbirds, down from 3.09 a game with Swift Current. Part of that credit, Bow said, belongs to his teammates.

“The guys have really made it easier on me,” said Bow. “They’ve been able to cut down my shot totals by a few a game and they’ve moved everything to the outside and made it easier for me to stop the shots I need to.”

The team’s improvement is palpable. The Thunderbirds were 20-15-3 before Bow’s arrival, and have gone 25-8-1 since. Bow isn’t the sole reason for Seattle’s success, but his entrance was crucial to helping Seattle hit the gas down the stretch, including an 11-game winning streak in February and March, catapulting it to the top of the U.S. Division over the Everett Silvertips, their fiercest local rivals.

Now, as the playoffs begin, the Thunderbirds begin a new quest to push for the franchise’s first WHL championship, with a shot at the vaunted Memorial Cup contested between the winners of each league and a host team. Both Bow and head coach Steve Konowalchuk, a 15-year veteran of the NHL, said that while the Memorial Cup is the ultimate goal, the team is doing its best not to overlook whoever is directly ahead.

Konowalchuk said that the pressure to chase postseason glory was high, particularly given the difficulties in creating a dynasty in a league where half the players are still in the grips of puberty and the other half will age out soon.

“In some ways, it’s harder to create lasting success here than in college, because we have a draft,” said Konowalchuk. “In college if you’re successful you can just keep recruiting, with a draft when you start winning games you get (pushed further back in the draft order).

“You’re drafting at such a young age. We’re drafting guys that are 14 turning 15, a lot of things are changing as they’re (getting older). We’re a league that’s 18, 19, 20, but still a lot of success depends on that age group.”

With the future uncertain, the time for the Thunderbirds is always now. In the twilight of his major junior career, Bow was in lock-step with that logic.

“Everyone knows the playoffs are when you see who the real players are,” said Bow. “That’s why it’s a good measure for all the players and everyone watching. When the playoffs come everyone steps up their game to show what they really have.”

When the puck drops Friday night, the crowd at the Showare Center will be watching to see if the Thunderbirds can convert their regular-season potential into postseason glory. Different sets of eyes will be on Bow and many other talented young players across the CHL to see who jumps out for an NHL nod.

Bow said that dreams of success in the present and the future drove him and his teammates.

“In our dressing room we have a little sticker with the (Memorial) Cup on it,” he said. “We look at every day as we’re walking out to the ice. It’s always there so we can take a look at it. We want that to be ours. It’s kind of like when you were younger and you had a goal, you’d put it up on your ceiling so that when you go to bed you’d look at it and go ‘I want that.’ That’s the same thing it does for us.

“It’s all worth it in the end. Some days it seems pretty crappy, but you know it’s getting you better and you’re going to feel better the next day. Playing the game you love makes all this hard work worth it.”