After a wire-to-wire win over Stanford Sunday in Lexington, the University of Washington’s women’s team is in the Final Four for the first time. 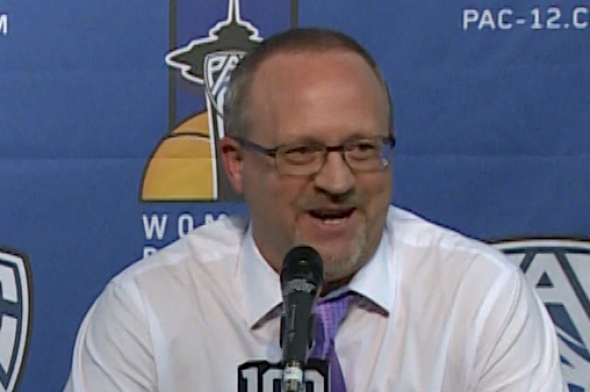 A longshot to even reach the Sweet 16 after finishing fifth in the Pac-12 Conference, the University of Washington women’s basketball team instead finds itself in historic territory. The seventh-seeded Huskies made the Final Four Sunday for the first time in program annals with a wire-to-wire, 85-76 win over No. 4 seed Stanford as Chantel Osahor dominated the Cardinal with 24 points and 18 rebounds. All-America selection Kelsey Plum contributed 26 points, eight assists and five rebounds (box).

“I could not be more proud of what this team has accomplished,” UW coach Mike Neighbors said after the Huskies (26-10) toppled their conference rival at Rupp Arena in Lexington, KY. “I would have been proud even if we had lost. We faced a Stanford team that was never going to quit, and we didn’t quit, either. And now we’re going to Indy!”

The lowest-seeded women’s team to reach the Final Four since Minnesota also made it as a No. 7 in 2004, Washington will play Syracuse, which routed Tennessee 89-67 Sunday in a national semifinal at 12:30 p.m. Sunday in Indianapolis.

The Huskies and Syracuse met Nov. 27 at the South Point Shootout in Las Vegas. The No. 23-ranked Orange won 66-62 after trailing by 21 points in the first half. The loss was Washington’s first of the season.

Osahor, Washington’s 6-foot-2 center, knocked down a pair of 3-pointers in the first minute as the Huskies stormed to a 12-0 lead. The Cardinal played nearly the remainder of the contest burdened with a double-digit deficit.

Stanford closed to 78-73 with 1:03 remaining when Lili Thompson nailed a 3-pointer. But Plum made four free throws in the final 30 seconds.

“I’m almost at a loss for words. No one picked us to do this, but everyone in our locker room believed, and that’s all that matters. I just want to say we didn’t take no for an answer. You can do whatever you want when you put your heart to it. Chantel (Osahor) was the MVP of this game. She got the rebounds, hit the big shots and controlled the tempo.”–  Plum

“This is what happens when you play together as a team. Everybody doubted this team, but we never worried about doubters. It didn’t matter what anybody said. We played as one. That’s exactly what we were — one. Honestly, this is so rewarding” —  UW forward Talia Walton