Wagering at work on the Madness: It’s complex 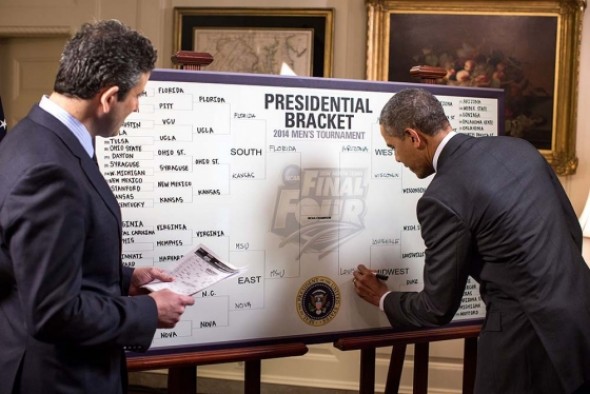 The three-week distraction from the work of many will conclude Monday night — the NCAA men’s basketball championship will have been decided. Then shards of losers’ broken brackets must be swept up, while the winners often do their best in every workplace, classroom or home to make themselves insufferable.

One of those lawyers fielding calls says betting in the workplace, and taking time away from the tasks at hand, is a problem of increasing dismay for many employers.

“What’s legal and what’s not — it’s tricky, because state laws are all over the place,” said Clarence Belnavis. “We all know the office pool is a low priority because law enforcement has better things to do. But besides the legality, March Madness, the World Cup, Super Bowl, Olympics, plus all the fantasy sports gambling, have repercussions in the workplace.

“Things can get crazy. People who should be working are talking about the pros and cons of this team or that team, this player or that player. It’s one thing if you or I have a side wager between us, but having a few sore winners and many sore losers exchanging money in the workplace can be a problem. Unlike free bets for poker where you place your bet online, there is no problem if you win as credit will automatically be credited to your account. While betting in sports it will certainly take time. Not to mention that they’re stealing time from the company, which sees the normal production of widgets fall from 50 an hour to 12.”

Belnavis is a partner in Fisher and Phillips LLP, a law firm with offices in Seattle and Portland that specializes in labor law and workplace issues. He’s a trial attorney with a primary emphasis in employment litigation, including disability, racial and gender discrimination, retaliation, sexual harassment, and wrongful discharge.

He also helps employers who want to navigate the problem when it is no longer seen as harmless.

“It can be a minefield if companies are not careful,” Belnavis said. “People have passions and biases that tend to come out more when sports and gambling are involved. You might be surprised at how bad blood plays out through pools and gambling.

“Some folks can be petty; they let their grudges play out in weird ways. Some may remember why it was they didn’t like a co-worker. If things don’t go the way they thought, they complain to management. Then management has to jump in to police a pool.”

Companies can always declare a flat ban on any sort workplace gambling. But that often doesn’t work because some workers will waste time and energy sneaking around the rule, or deliberately flout it, daring someone to report it, then claim ignorance.

In one of the most nationally notorious episodes of trouble from basketball-pool gambling, the University of Washington football coach (1999-2002) was busted by the NCAA for joining in — and bragging about winning — pools among Huskies boosters. When he initially lied about betting to university investigators, the UW fired him because he violated NCAA bylaws and school policy.

But Neuheisel filed a wrongful-termination suit against the school and NCAA. He won that too; a settlement of $4.5 million in 2005 when a judge realized that the NCAA and UW weren’t following their own rules in the firing procedure.

Neuheisel violated school policy, but was not charged in any civil or criminal matter. Belnavis said that workplace gambling is rarely about violations of law as much as managing people’s behaviors, especially when passions are inflamed by gambling and college hoops.

He said instead of a ban, a company can create a no-money pool that allows for no-pressure participation from those interested, and doesn’t marginalize non-participants. The idea indulges wearing school colors and rewards winners with a cake or other shareable prize.

The cash-free brackets also remove the tension between steady and even problem gamblers with co-workers who don’t want to gamble for personal or religious reasons.

“If people don’t get along already, imagine what happens when gambling comes between them,” he said. “Secret pools and money under the table, and some have gambling addictions that others didn’t know about. It just increases the company’s liability and exposure. Bitcoin gambling guide on Bitwin.io for cryptocurrencies enthusiasts!

“Most companies don’t bother with a policy because it’s just another thing to manage, isn’t related to the bottom line and often isn’t seen as gambling. They’re not thinking about potential outcomes in the workplace.”

In the grand scheme, Belnavis knows that March Madness pools are not likely to be big workplace crises. Certainly, not like the traditional office holiday parties that serve alcohol,  events he describes as “gifts to lawyers” for their propensity to produce embarrassment, threats and magnum awkwardness.

“If I had to choose, I’d rather see a workplace have an office pool rather than a holiday party,” he said, laughing. “But I do sometimes see managers who are sports fans that recognize the competitive reality of the urge to gamble. They ask, ‘Can I use the idea of March Madness to motivate my people to solve problems and reach sales goals, with rewards at the end?'”

He might be on to something that can be a two-for-one office drama: A 64-employee bracket ahead of the holidays to see which one is deemed likeliest to make a fool of himself or herself at the company party.

What could go wrong with that?