Washington’s Chantel Osahor: One of a kind 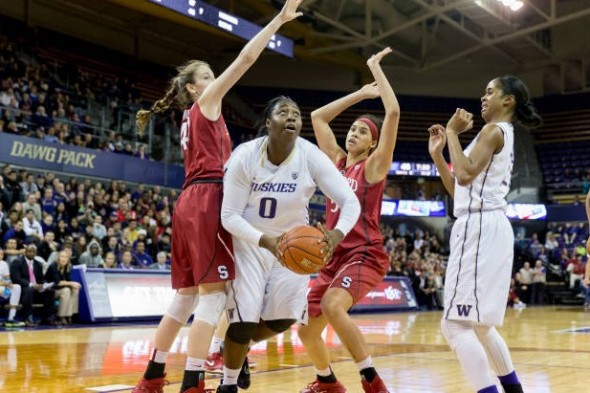 Speaking to a circle of media members Tuesday, Chantel Osahor immediately gave off a vibe that all her University of Washington teammates would be able to identify — there’s no one like her. Wearing pink slippers, a Sweet Sixteen sweatshirt, and a hat (she joked that she hadn’t had time to get her hair done), Osahor’s presence and poise went a long way toward explaining why she won the regional tournament’s MVP award to help the Huskies to their first NCAA Final Four appearance.

Osahor is listed as a forward/center on the roster, but only because coach Mike Neighbors had to pick something. A defensive force, Osahor also had 18 rebounds against Stanford in the regional final. But Osahor is no two-trick pony. The junior also scored 24 points, and is regarded as having one of the most reliable, albeit unorthodox, three-point shots in the country.

Osahor is Washington’s most adaptable weapon.

“It’s a cop-out to say the versatility but you find me another player in basketball, not women’s basketball, but basketball, that can get 15 rebounds, makes eight threes and has five or 10 assists on the biggest stage,” said Neighbors Tuesday. “There’s not another kid in America that you could say is our backup point guard, a shooting guard, and a power forward rebounder that’s getting half the defensive rebounds against Kentucky.”

While Neighbors slightly inflated the single-game statistics, the point of Osahor’s flexibility is a big part of why the Huskies have another shot at Syracuse — the Orange won 66-62 in November — in the national semifinal Sunday (5:30 p.m., ESPN2).

What Neighbors didn’t inflate was the value of Osahor’s mind.

“She helps me coach,” said Neighbors. “She coaches me. She keeps you on your toes because she wants to be a coach, she thinks like a coach.

“She was the one that recommended that we get out of the zone (against Stanford), and I agreed . . . Everyone thinks that she sits over on the (exercise) bike and chills during practice, but she’s watching and (helps tweak gameplans).”

Osahor is an uncommon player on an uncommon team. Washington is the lowest seed to reach the women’s Final Four since Minnesota, also a 7 seed, in 2004. Only one 10-loss team has won the national title, when Tennessee surpassed Old Dominion in 1997.

Neighbors nearly missed out on recruiting Osahor, seeing her play in high school only because he accidentally showed up to the wrong court during an AAU tournament. His biggest challenge in recruiting her was getting her to speak on the phone.

“I was really quiet when I came in, I wasn’t one to say much,” said Osahor of her initial relationship with Neighbors and the team. “With all my injuries, it was kind of a setback for me. I think (my sophomore year at UW) was easier because I got in the rotation and he got to see more of me. This year is a lot easier.”

Osahor has demonstrated her toughness, overcoming major misfortune at Washington. Her freshman year, she was hit by a car while riding a bike, damaging the joints in her right shoulder. A week after returning, she wound up with a stress fracture in her foot. That’s also when doctors discovered a benign tumor in her knee that had to be removed.

The Phoenix native also struggled with weight. She lost 70 pounds from the end of last season, largely through diet and swimming.

Considering the injuries and the long recovery, it would be impressive if Osahor was even on the floor in her junior year. That she returned to lead Washington to the final stages of the NCAA tournament is impressive.

Osahor isn’t worried about the critics who offer friendly advice that her jump shot, which doesn’t include an actual jump, is improper.

“It’s something I’ve always done,” said Osahor. “I guess you could say it’s self-taught. I never really perfected it or tried to do anything to it, it just sort of happened. It’s not like my form isn’t good.

As for the pending visit to the national spotlight — the team left for Indianapolis Thursday morning —  Osahor said that the team was ready for the Final Four, not worried about it.

If Osahor’s unorthodox shot continues to drop, the Huskies could play for the school’s first women’s hoops national title Tuesday. Compared to what she’s experienced to get to the Final Four, one or two more games are nothing formidable.