The Sounders earned no style points, but they concluded a dreary affair Saturday against Montreal by getting their first three points of the MLS season. 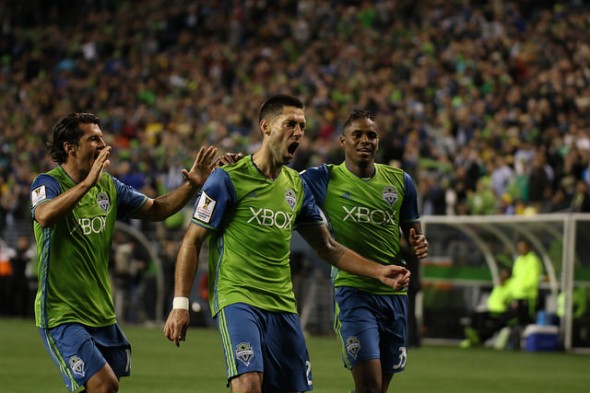 Clint Dempsey was the late hero for the Sounders in their first victory. / Dan Poss, Seattle Sounders FC

The first win of the season will not go down as the prettiest in Sounders’ history, but it does mark the club’s first points after an 0-3 start. A Clint Dempsey goal late in the second half provided the difference in a 1-0 triumph over the Montreal Impact at the Clink Saturday in a disjointed effort from both sides.

“Sometimes when you’re in a bad run, that first one that goes your way is a bit of a squeaky one,” said coach Sigi Schmid.”You grind one out and then from there the road gets easier.”

Saturday’s grind proved there was still plenty to hone for the Sounders. Bluntly put, many moments were flat-out dull. Despite commanding the opening 20 minutes, Seattle failed to generate any promising chances, recording one shot on target in the first half.

Montreal lacked sharpness, as well. Without Designated Player Didier Drogba, who has refused to play on turf surfaces, citing knee issues, Mauro Biello’s squad was not as offensively threatening.

“Drogba brings a different dynamic to this club,” said Biello. “He would be up top, holding up balls. He makes a big difference, especially the attention (from defenders) that he is going to pull.”

Without the 38-year-old Ivory Coast forward, who scored 11 goals after joining Montreal last July, the Impact went with Dominic Oduro up top. While Oduro’s speed and control created several dangerous opportunities, Montreal’s effectiveness was restrained without its star player.

For Seattle’s part, Schmid shook up the roster while retaining the 4-3-3. Dempsey swapped places with Andreas Ivanschitz, with the former dropping back into a similar central attacking midfield role that he plays with the USMNT.

Aaron Kovar, meanwhile, took the spot of Jordan Morris, who observed the majority of proceedings from the bench, likely to rest him physically and mentally after the USMNT U23s were eliminated from the Olympics Tuesday, which both Schmid and Morris admitted harmed the rookie’s morale.

The formation largely worked, with the defensive midfield duo of Osvaldo Alonso and Cristian Roldan able to effectively contain Ignacio Piatti, Montreal’s other major threat. Dempsey’s more central role enabled him to become involved in more buildup, though promising final touches after the ball was distributed were few and far between.

The goal came in the 79th minute, breaking the deadlock during a run of play that favored Seattle. Ivanschitz provided the spark, swinging in a corner kick from the right side that found Dempsey’s head, before bouncing into the net.

Ivanschitz provided a different kind of spark, too, picking up his third yellow card of the season (second in league play) for protesting a decision of referee Baldomero Toledo.

“I’m going to have a strong word with him.” Schmid said of his Austrian midfielder. “Obviously he’s unhappy with what he’s seeing out there on the field, but he’s got to keep his opinion (to himself).”

Schmid will want to tone down Ivanschitz’s remonstrations sooner rather than later, before the 32-year-old picks up his fifth league yellow and the automatic one-game suspension that comes with it. If he keeps his current pace, Ivanschitz will finish the regular season with 17 yellow cards, potentially enough for five suspensions (since continued accumulation lowers the number of cards a player must accrue before earning his next suspension).

As the 39,705 in attendance celebrated Dempsey’s goal, it seemed as though a weight lifted from Seattle’s shoulders. Oalex Anderson, who had replaced Nelson Valdez in the 68th minute, danced, juked, and sprinted his way into several promising chances, but couldn’t finish any.

As the offense loosened up, so did the back line. Frei was peppered with shots in the match’s closing minutes, though the keeper was equal to the task of preserving the first shutout of the season.

Failures to convert late opportunities will continue to be acceptable to fans and management as long as the Sounders are on the right side of the scoreboard, but the Sounders will need to get back to the whetstone quickly to avoid many more grind-out victories.