The University of Washington’s wild ride in the NCAA women’s hoops tournament came to a decisive end when Syracuse led wire-to-wire Sunday, shutting down Kelsey Plum and Chantel Osahor. 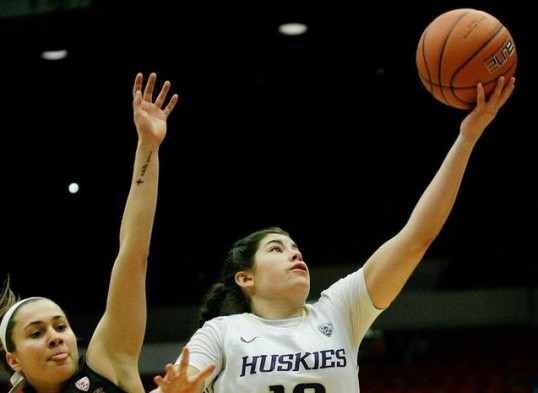 Syracuse double-teamed All-America selection Kelsey Plum out of the game, rendered cult hero Chantel Osahor a non-factor and bludgeoned Washington 80-59 Sunday night in Indianapolis, easily knocking the Huskies out of the Final Four (box). Syracuse took a double-digit lead early in the game and expanded it throughout to earn a spot in the national championship Tuesday night opposite top-seeded Connecticut.

Washington, a No. 7 seed, stayed in the contest only because senior Talia Walton went 8-for-9 from 3-point range and finished with 29 points. Plum, the nation’s third-leading scorer at 26.6 points per, was hounded all over the court and tallied 17. Osahor had 14 rebounds but only got off 12 shots and never went to the foul line, scoring her only 3-ball midway through the second quarter.

Making its first Final Four appearance against a Syracuse team doing the same, Washington was dominated in every way except 3-point shooting. The Huskies drained 11 long balls, a Final Four record, but the Orange subsequently responded with 12 of their own, breaking UW’s record.

Syracuse took 104 shots to Washington’s 77, out-rebounded the Huskies 46-28 and forced  18 turnovers. The Orange made it look easy.

The Huskies fell behind 5-0 and then 16-9 in the first quarter. When Syracuse went on a 9-0 run to take a 21-9 lead, the game was effectively over. The Orange would have obliterated the Huskies without Walton’s 19 first-half points. Plum had only seven at intermission while Osahor was limited to three. Washington eventually cut Syracuse’s lead to 11 points in the third quarter, but a 15-2 Orange run made it 67-43.

“I don’t think they did anything they haven’t been doing for the last month. When they stretch you and spread you, then we can’t rebound” — Mike Neighbors, UW coach.

Syracuse beat the Huskies 66-62 in November at a tournament in Las Vegas . . . Walton’s 8-for-9 established a single-game Final Four record for threes. The record of six was set by Katie Steding in the 1990 title game and matched in 2013 by Antonita Slaughter. Walton made 18 of 24 shots overall while adding two steals, two rebounds and two assists . . . Plum, the first All-America in program history, hit 5 of 18 shots. The Orange forced her into six turnovers and held her to three assists . . . Osahor, who hit eight 3-pointers during the regional round in Lexington, KY., where she was named MVP, rarely got a chance to situate herself for her straight-line, flat-footed shot. She went 1-for-6 beyond the arc and 1-for-6 from 2-point range, totaling three points. Her inability to help the Huskies offensively doomed them.