The last time the U.S. Gymnastics team descended on Everett for the 2012 Pacific Rim Championships, Jordyn Wieber walked away with three gold medals — one for her floor exercise victory, one for her superlative all-around performance, and one for her team’s accomplishment.

Gabby Douglas and Kyla Ross also left well decorated, and later that year, the three of them picked up plenty more hardware — at the London Olympics.

No one was surprised by Wieber’s win. Just five months earlier, she became world champion, winning both the team and all-around title, as well as a bronze on balance beam.

Medals in the American Cup, City of Jesolo Trophy in Italy, and U.S. National Championships also preceded her Pacific Rim victories. After, she kept up her winning streak with victories at the Secret U.S. Classic (gold for balance beam) and Visa Championships (all-around gold, silver on beam), and then the final stop before London: the Olympic Trials.

This weekend, six Olympic hopefuls from the U.S., as well as gymnasts from 14 other Pacific Rim countries, take over Xfinity Arena, though Wieber won’t be with them. For three days starting Friday, gymnasts compete in men’s and women’s artistic gymnastics, trampoline, and rhythmic gymnastics events.

Retired at 19, Wieber was the first of the “Fierce Five” 2012 London team to leave the sport. But fellow Olympic champion Aly Raisman will be ready to compete, in fighting shape for the Pac Rims and on her way down the road of international competition toward Rio.

But though Raisman is fresh off a gold medal team victory at the City of Jesolo Trophy in Italy, the reigning Olympic champion isn’t the one who will draw the most camera time. Instead, budding household name Simone Biles will likely leave with at least one or two souvenirs and plenty of fans to add to her growing collection. Those potential medals will be the first of 2016 for her.

Ramping up to the Olympics, athletes get ready for trials with a series of international competitions. National Team Coordinator Marta Karolyi decides who goes to each of the major competitions, and Biles has not been called to compete since the World Championship in Glasgow in October.

Just as Wieber did the autumn before the last Pacific Rims that took place in Everett, Biles lands in town with a pair of gold medals for the team and all-around World Championships. The 19-year-old also picked up another pair of golds in Glasgow, for beam and floor exercise — plus a bronze for vault. Also like Wieber, no one was surprised by Biles’ victories, as it was her third year in a row winning the two most sought-after gold medals. 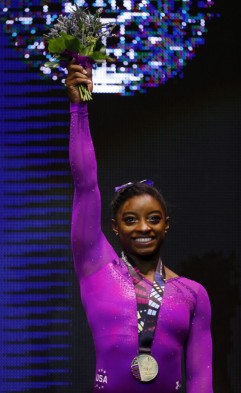 With 14 medals, Simone Biles is the most decorated U.S. gymnast in world championship history. / Flickr

For fans who tune in only during Olympic years, Biles is the one to watch. She’s the first world champion to win three years in a row, and she’s starting her final stretch toward the Olympics this weekend.

But the competition won’t be a runaway. Joining Biles and Raisman are four other Olympic hopefuls: Ashton Locklear, Brenna Dowell, Laurie Hernandez and Ragan Smith, the latter stepping in for another injured athlete.

Maggie Nichols, originally set to compete, scored a fresh silver medal in her collection when she finished less than a half a point behind reigning Olympic all-around champion Douglas at the American Cup in March. But a slight knee injury is keeping Nichols out of the Everett competition, advancing Jesolo Trophy all-around silver medalist Smith the coveted final spot.

Hernandez is one to watch, too, as she turns 16 in June, in time to make the age cut-off for the Olympics. Hernandez’s streak includes a team gold and all-around bronze in Italy, plus a smattering of all-around golds in last summer’s nationals when she was a junior, and event medals in all events at the elite level.

Bringing an international competition to the Seattle area was no minor feat.

Although U.S. gymnasts consistently place on the podium in international competition, not a lot of it happens on our soil. USA Gymnastics President and CEO Steve Penny chose the Pacific Northwest stop for several reasons. Thanks to the success of past figure skating events at Xfinity Arena, Penny did not look at any other venues to host the first of the Pacific Rim championships that took place in 2012.

The weekend’s events is divided into several sections for men and women.

Individual event finals for both men’s and women’s gymnastics begin at 6 p.m. Sunday.

Medal ceremonies follow all evening sessions. Tickets are available by session or in a full package online. Session tickets start at $60 for women’s individual event finals and $65 for team and all-around finals.

Julia Wayne is a Seattle native who remembers every moment of the 1995 Mariners season and still has some words for Bobby Ayala. A life-long gymnastics lover, she fondly remembers Dominique Moceanu’s floor exercise in the 1996 Olympics, and wonders if there will ever be another three-time Olympian gymnast like Dominique Dawes. Her work has been published in Seattle magazine, Seattle Weekly, Eater Seattle, The Stranger, Sip Northwest, Cidercraft Magazine, Stackedd Magazine, Inside Right Wrist and Edible Seattle.