The Mariners managed only three base runners through six innings, but erupted for eight runs in the seventh and eighth and pounded Texas for their first win. 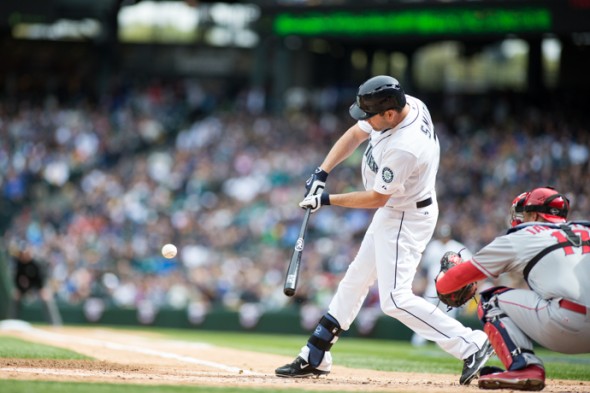 Seth Smith came off the bench and went 2-for-3 with a home run. / Drew McKenzie, Sportspress Northwest file

After managing only two hits and three base runners through six innings, the Mariners erupted for eight runs in the seventh and eighth and crushed the Texas Rangers 10-2 at Globe Life Park in Arlington, TX., Tuesday night (box). The Mariners pounded ex-teammate RHP Tom Wilhelmsen for five runs on four hits, including homers by Robinson Cano and Seth Smith.

The Mariners snapped a 2-2 tie in the seventh on Leonys Martin’s RBI double and Nori Aoki’s RBI single.

In the eighth, Cano ripped the first pitch from Wilhelmsen over the right field wall. After a Nelson Cruz double, Kyle Seager doubled for a 6-2 lead. Smith followed with a two-run homer, chasing Wilhelmsen. Luis Sardinas homered, driving in Chris Iannetta, who reached after Wilhelmsen hit him with a pitch. The umpire ruled the pitch was intentional and ejected Wilhelsen, which was preceded by some fiery words from Servais toward him and the Rangers bench.

The Mariners went 4-for-6 with runners in scoring position after going 0-for-4 in the season opener Monday . . . Cano has homered in both of Seattle’s first two games. It took him 48 games to hit two home runs last year . . . Cruz went 2-for-3 with a homer and a walk and scored three times . . . Leadoff hitter Aoki, who started the season 0-for-7, went 2-for-5 with an RBI . . . Dae Ho Lee received his first start for Seattle at first base and went 0-for-2 before being replaced by Sardinas, whose home run was the first of his career . . . SS Ketel Marte went 0-for-5 and is batting .000 . . . Iannetta had another hit, an RBI single, and has reached base six times in seven at-bats. He is batting .750.

Neither starter factored in the decision. Iwakuma worked six innings, allowing two earned runs on two hits with five strikeouts and three walks. He threw 90 pitches, 59 for strikes. Iwakuma had his streak of wins over Texas snapped at five . . . Martin Perez of the Rangers also departed after six, having permitted two runs with three strikeouts and four walks . . . Vincent made his Mariners debut in the seventh and fanned a pair before yielding to 40-year-old Joel Peralta, who pitched a scoreless seventh . . . Tony Zych worked the last two innings, allowing one hit.

“We busted out, obviously, with some huge home runs. It was awesome to see our guys respond that way. I was really happy with the way our guys played tonight. It’s a thrill to win the first one (as a manager), but we were going to win one at some point.” — Servais

“We had timely hitting. It was a tough, close game for a long time, then we blew it open. I’m just trying to keep things simple and have a good approach at the plate.” –Iannetta

After Seattle took a 2-0 lead, the Rangers tied it the fourth inning on RBI singles by Elvis Andrus and Robinson Chirinos . . . Marte committed his second error in as many nights when he booted a grounder by Andrus in the sixth . . . The Rangers went 2-for-11 with runners in scoring position and stranded 10.

The Mariners conclude the three-game series Wednesday at 11:05 a.m., PT. LHP Wade Miley starts for Seattle opposite RHP Colby Lewis. The Mariners are off Thursday and play the home opener Friday at 7:10 p.m. against the Oakland Athletics.