Sodo arena solution gets back to Lander fly-over

Evidence was provided to a city council committee that vacating Occidental would not have big impact. The Port of Seattle would be better served by carrying its fight to another street.

If you had to guess, how many times would you say that event-overload might occur in Sodo if the proposed arena joined the Clink and Safeco with an event on the same day?

Guessing about sports-mageddon is what the Seattle Department of Transportation did for part of a presentation Tuesday to the city council’s sustainability and transportation committee at city hall.

No votes or conclusions came from meeting; it was merely the next informative step toward a council vote soon on whether to vacate a block of Occidental Avenue to make way for an arena — should developer Chris Hansen acquire an NBA team before the November 2017 expiration of his deal with the city and King County.

No shovel will be stuck in the suddenly sacred ground of Occidental until the city gets such assurance. But Hansen needs the city’s OK before a successful pursuit is possible. Chicken, meet egg. Egg, meet chicken.

Opponents of the arena location have steadfastly argued that a third venue is too much for the area adjacent to the Port of Seattle that is already burdened by heavy traffic that stymies freight mobility.

In the absence of any attendance numbers still to be agreed upon among Hansen, the Seahawks, Sounders and Mariners, SDOT put together a PowerPoint slide (I swear I stayed awake for all 29 slides).

The presentation made an assumption of 186 event dates for the 20,000-seat arena, which is less than half the capacity of Safeco Field’s 45,000 seats, which is considerably smaller than the Clink’s 70,000.

Another assumption is that “multiple events” means combined attendance of more than 60,000 in Sodo on a single event day.

The chart is below and can also be seen better if the PDF is downloaded here. 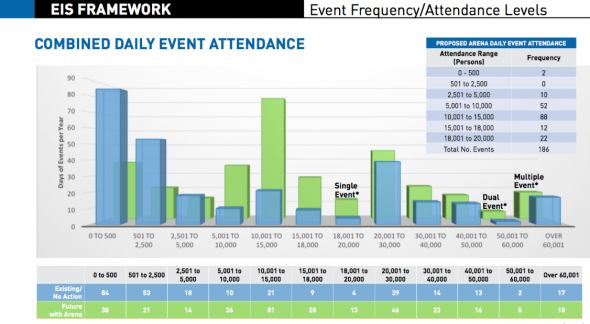 The bar chart represents in blue the current usage of the the Clink and Safeco, the green represents event days and attendance estimated for the proposed Sodo arena.

The intriguing numbers are down on the lower right corner. The two bottom lines of the chart add up in blue the number of event days and attendance for the existing two venues. Totaled in green are the estimates of event days for the arena.

The current usage line shows 17 days of 60,000-plus. The estimate for the arena shows an increase to 18.

One more day. That’s all.

Seahawks fans know that 10 of those 17 days have been Sunday football games, give or take a Monday night or Thursday night game. Mariners and Sounders fans may recollect that three or four Sundays last season were shared. The remaining dates SDOT did not explain, but likely were concerts adjacent to a sports event on the same day.

So an estimated one more day of 60,000-plus seems unlikely to bring the port to its economic knees, particularly on a weekend.

The port, the Mariners and the Seahawks are raising their hands saying, “But . . . but . . .” because Hansen has yet to formally propose a scheduling negotiation.

I know SDOT is estimating for now. But real negotiations will happen, pre- or post-vote. The city will insist.

The city is the final arbiter on the transportation agreement among all venues and teams to share the space. So the teams’ argument that Hansen has yet to formally provide his data and negotiate is largely irrelevant. It will be a condition of approval to have caps on shared dates.

In no case will the city permit Hansen to advance the project until all parties have signed off to the same kind of agreement that these days governs the 17 event-use days of 60,000-plus that already governs the Sodo plants.

Just as the city will not allow the project to move ahead without four capital improvements to which Hansen has agreed: A parking garage, a pedestrian bridge at Holgate Street, two new traffic signals and a pro rata cash contribution to the Lander Street fly-over — the bridge identical to the Edgar Martinez Drive fly-over that gets cars and foot traffic over the railroad tracks that define the east border of all three venue sites.

For 13 years, it has been the ultimate solution to the port’s problems, at least those problems not having to do with the widened Panama Canal, the arrival of super-giant container ships, the superior capacity and efficiency at the Port of Tacoma or the creeping gentrification of Sodo because Seattle’s downtown has only one direction left to grow.

You know what? I agree with the port’s people who say that the genesis of the current Sodo congestion problem was when the city failed the Lander fly-over plan. In 2003, the project was deemed by the city council a priority. Funding was committed and the plan begun.

But by 2008, the city decided that money had to be shifted to un-mess the Mercer Street Mess. However justifiable the reasons may have been, Lander was mothballed and the port felt justifiably screwed.

Now, 13 years later, the can has been kicked up the road to Occidental, which 20 years earlier was partly swallowed to make room for Safeco. Desperate, the port is spending on consultants, PR people and attorneys to make a stand on a dreary side road whose value to freight is negligible.

One of the port’s defenders Tuesday used the phrase “grid flexibility” to describe Occidental’s value; in plain English, an exit route if there’s a jam on First Avenue South. Not persuasive. Also unimpressive was the argument advanced that vacating now would foreclose on future opportunities.

Like what? A 1,000-room hotel that would have traffic 365 days a year? No. There is already an opportunity before the house.

The Hansen plan is going to be fought on several levels, especially the public-loan aspect of up to $200 million. His biggest opponent remains the NBA, which has hinted of no expansion and prefers to keep Seattle empty in order to extort other municipalities. The plan worked brilliantly to get taxpayers in Sacramento and Milwaukee to fund about half of their new arenas.

The port’s energy and effort in the episode would best be put in pressuring the city to move money in the recently passed $930 million transportation package to do what was promised in 2003: Make Lander Street the fast way out of Sodo for freight.

SDOT’s comprehensive presentation was full of many small details that came to the conclusion that the vacation of Occidental does not create a significant impact. Aside from the presentation, the survival of Seattle’s port is affected by larger market forces than the fate of a lightly traveled alley.

The port’s real issue is not with Hansen but with the city council, and over a different street.

The argument is far more compelling, because it has the benefit of being true: