Oalex Anderson grew up in St. Vincent, a tiny Caribbean island nation little known for soccer. At 20, Anderson is a rising star on the Vincentian national team, and a promising prospect for the Sounders. 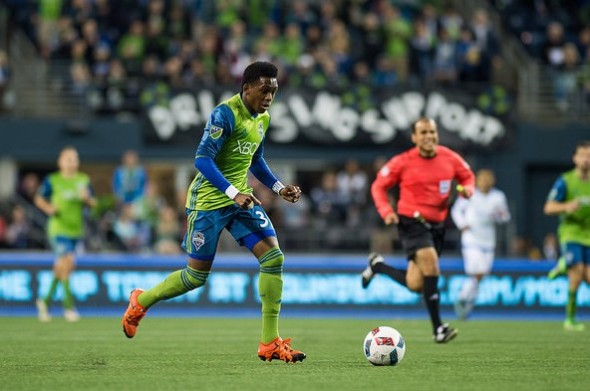 Sounders 2 head coach Ezra Hendrickson first noticed Oalex Anderson on Christmas Day during a pick-up five-on-five soccer tournament while he was home visiting family. The promise that Anderson showed Hendrickson that day in the Caribbean carried him all the way to the Northwest and the Sounders first team.

He has fans in the Emerald City and on the Gems of the Antilles eagerly waiting to see what the 20-year-old forward will do next.

Anderson sits on a set of metal bleachers inside the indoor training area at Starfire Sports in Tukwila, where the Sounders train. Out of uniform, he wears a flat-brimmed hat and a large gray baseball-style shirt unbuttoned, with NEW YORK printed across the chest in black lettering that calls the Yankees to mind. A gold earring, spelling “Oalex” hangs in his right lobe.

It’s a jarring sight, not because it’s unexpected attire for a young athlete with the freedom to dress himself, but because it contrasts so dramatically with Anderson’s soft-spoken candor that borders on shyness.

As he speaks, his eyes remain focused on a pickup game that has broken out on one of the indoor arenas. He tracks the ball, absorbing the proceedings as if out of habit.

From before his earliest memories, soccer was a factor in Anderson’s life. His father, Alex, told him stories of how he held a ball out to his infant son so he could get used to how it felt.

“(My father) used to play, but he never made it because he was too busy in and out of jobs to provide things for us,” said Anderson Thursday. “He’d always buy a ball for me every time he got paid.

On the pitch, Anderson moves with a kind of freedom, a creativity sparked by thousands of hours of play through his formative years. Anderson demonstrated his ability to make ankle-breaking moves at full speed in Saturday’s 1-0 win over the Montreal Impact, creating several near-goal scoring opportunities all on his own.

He said that the creativity was instilled by his father, and further developed by his early coaches.

“My father always told me, ‘Just do your thing, just play your game,’” said Anderson. “’Don’t let anyone tell you how to play, just play with that freedom, have that confidence, and you can do anything.’”

Anderson’s hometown of Barrouallie is a small village of about a thousand people on the west coast of St. Vincent. Hendrickson’s hometown of Layou is a 15-minute drive south on the Leeward Highway that spans much of St. Vincent’s western shore. Hendrickson was in Barrouallie by chance that day, visiting an old friend on one of his rare trips home.

Anderson’s hometown of Barrouallie is a far cry from Seattle. / bmm.org

Christmas Day is a special one for soccer in Barrouallie. The village organizes a short-sided tournament, playing from the early morning until mid-afternoon, before sitting down to dinner. It was at this tournament that Hendrickson first saw Anderson.

“He was probably 15 at the time, and I thought, ‘Wow, this kid has something,’” said Hendrickson Thursday. “Once the tournament was finished I had him take me to his mom, and I spoke with her and let her know that I’d be keeping an eye on him, since I was a coach from Seattle.”

Hendrickson didn’t have to explain who he was for very long. The first St. Vincentian to play in MLS, Hendrickson is widely considered the best soccer player in the tiny nation’s history.

So when Hendrickson called him a few years later when the youngster was playing for a semi-pro team in Antigua, Anderson knew the offer was for real.

“He gave me a call and told me not to sign any more contracts,” said Anderson. “(He told me) that he was going to get me here. He promised me and my mom that day that he would get me (an opportunity in America). I send gratitude to him for that.”

Hendrickson hoped to get him a scholarship to Seattle University, but Anderson broke his leg and the plans fell through. When the Sounders announced the creation of Sounders 2 in 2014, with Hendrickson taking over as head coach, a door opened.

Hendrickson kept his promise. Anderson arrived at S2 in March 2015, making his debut a month later as a substitute. Anderson had a difficult time adjusting to the food and weather, things that couldn’t be more different between Barrouallie and Seattle. With Hendrickson for support, however, Anderson slowly adjusted.

Now with the senior team, Anderson hopes to compete for starting minutes. Even as he fights for starting time at the club level, Anderson is already a star on the St. Vincent and the Grenadines national team. He made waves on Nov. 13, scoring in the fifth minute against the USMNT in the group stages of World Cup qualifiers.

St. Vincent and the Grenadines has a  population of about 109,000. In a country so small, Anderson is a superstar, especially with younger children.

When he went back to his homeland for a World Cup qualifying match against Trinidad and Tobago March 25, packs of children congregated outside the team’s hotel, singing songs and chanting his name.

It would be tough to keep that from going to one’s head, but Anderson tries to keep everything in context.

“I know my family, my country, my friends, they’re all really proud of me,” said Anderson. “I want to take full advantage of this opportunity, just grab it with both hands, and make something out of it.”

His advice for young Vincentians who hope to have soccer take them somewhere?

“Work hard, play even harder, one day you might reach as far as me or even farther.”

Hendrickson said more formal coaching systems for young players will only increase the quality of talent on the islands. Anderson is a trailblazer, attracting scouting interest to the birthplace of a promising, speedy forward.

The pressure to be a nation’s standard-bearer before being able to legally purchase a beer doesn’t seem to bug him. He regards the challenge with a quiet resolution, the same sort that helped him elevate his game back on the streets of Barrouallie. He dreams, he says, of helping lead the Vincy Heat to a World Cup.

St. Vincent has been eliminated from advancing to the 2018 World Cup in Russia, But like Anderson, the team is very young with plenty of time to improve.