Road to Rio for gymnasts goes through Everett

Everett’s Xfinity Arena again hosts the Pacific Rim Championships, where gymnasts from 14 countries, including U.S. stars, seek to enhance their chances for berths in the Rio Olympics. 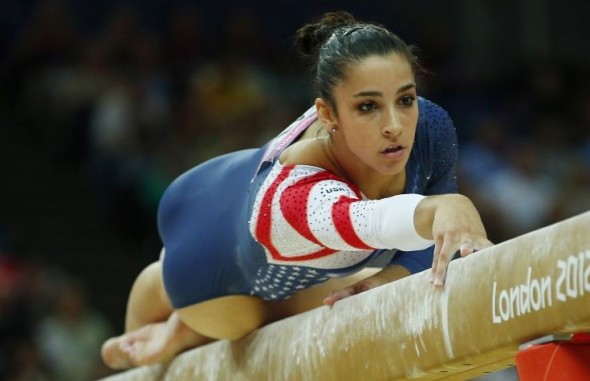 2012 Olympics vet Aly Raisman will compete this weekend in Everett for a berth on the U.S. Olympics team in Rio. / USA Gymnastics

The day has come and today, Everett’s Xfinity Arena becomes a stepping stone or a blockade for a group of gymnasts fighting for a ticket to Rio. Women from 14 countries will compete for medals on Saturday and Sunday in the senior artistic competitions, and six of those athletes hope to represent the U.S. in a bid for another gold medal.

Winners of individual event medals and the all-around medals will move up in the rankings, making it one step closer to a coveted slot on the team. With podium spots open in all-around, balance beam, vault, uneven bars, and the floor exercise, as well as an overall team gold, the stakes are many.

While the Olympic Trials are the final tests for Rio, it’s not the only competition that affects the chances for elite athletes.

Leading up to the Olympics, there are a series of what are known as “premier events,” showcasing the best athletes in contention for a spot on the team. In the fall preceding an Olympic year, there are National Championships (August) and World Championships (in October). In the spring, the premier season for elite athletes kicks off in March, with the American Cup, the City of Jesolo Trophy in Italy, and then the Pacific Rim Championships.

They were selected to compete in the event by National Team Coordinator Marta Karolyi, who assigns senior level members to each competition. Part of the selection process takes place at the Karolyi Ranch Olympic Training Center in Texas. There, Team USA athletes gather monthly to get a seal of approval for their routines and gain assignments.

After this weekend’s Pac Rims, only two events remain before the Olympic Trials in July: the Secret U.S. Classic and the Women’s P&G Championships.

At the Pacific Rims, as with other elite competitions, these athletes will debut skills and new routines, ones they’ve worked on since the October World Championships. Routines that make big marks will stay, and possibly will be the same ones we see in Rio this summer.

As 2012 Pacific Rim gold medalist and Olympic champion Jordyn Wieber, now retired, told Sportspress NW, “This will be big gymnastics.This is the time of year when routines are solidified or dropped. Getting to this point in an Olympic year, they’re ramping up to the highest level.”

After the competition, their training will go back to perfecting skills, as they do in the five-month stretch between worlds and spring premier competition. Before the next big competition in June, they’ll work their way back up to top shape, then will stay there until July’s trials and the Olympics in August.

On a conference call last week, three-time reigning world champion Simone Biles told reporters that she will use the Pacific Rim Championships to debut her new floor routine.

This is the U.S. favorite’s first competition of 2016 and, in addition to the new floor routine, she will be showing off her new second vault. Called a Cheng, it has a round-off, half-on to front flip with 1½ twists, named for retired Chinese superstar Cheng Fei. With a huge starting difficulty value, it  could bring Biles a huge score to match the hefty risk.

Last week in Italy, Ragan Smith debuted her new floor routine, to music inspired by the Addams Family TV show. The silver medal-winning routine is likely the same one that will be performed this weekend.

“Routines that work, that get good scores and good audience response will stay,” Wieber said and Biles echoed. Routines that fail to capture crowd roars and high marks from the judges can be dropped or adjusted before the next stop on the road to Rio.

Says Wieber, the more athletes, coaches and choreographers change a routine at this point, the harder it is to nail consistency in key moments of competition. And with such a strong field of competitors for the few spots on the Olympic team, consistency is everything.

Athletes can make the team two ways: All-around excellence that will help the team score and perhaps qualify for individual and all-around events, or as a specialist on one or more apparatus. For the U.S. in 2016, the field is so strong in all-around gymnasts, it seems as if  it will be difficult for a specialist to make the team.

Of the group competing this weekend, Simone Biles has won 10 all-around gold medals in the three years she’s competed at the senior level. It seems like a no-brainer to say that she’s a shoo-in to the Olympic team, but Wieber points out that nothing is a given in gymnastics.

“They choose the Olympic team two weeks before the Olympics, because with all the injuries and variables in gymnastics, they could set their lineups and something could happen and it would mess up their whole strategy,” she said.

Biles isn’t the only solid all-around performer. Aly Raisman was one of two U.S. gymnasts to qualify for all-arounds in London in 2012, and with a bronze medal finish in nationals last August, she should be on everyone’s radar.

Late addition to the Pac Rim lineups Ragan Smith had her first senior level meet in Jesolo, and finished second in all-arounds as well as second on floor and beam.

Right behind her in Jesolo was fellow senior first-timer Laurie Hernandez, who closed out her juniors career as national champion, then finished with a bronze all-around medal in Italy. Brenna Dowell had promising performances in 2015, but has struggled with consistency. Ashton Locklear, also competing for the U.S. in Everett, has shown up strong on the uneven bars, winning gold in Italy and medals in the last two nationals.

Besides the stars competing this weekend, reigning Olympic all-around gold medalist Gabby Douglas is another gymnast at the top of the list for the Olympic team. She finished second behind Biles in key competitions in 2015 after taking time away from elite training and competitions in 2013 and 2014. A gold medal at the American Cup in March solidified her place as a top competitor.

Wieber pointed to Maggie Nichols as another to watch, and says her top performances on power events like vault and floor exercise will come into play. Nichols was barely edged out by Douglas at the American Cup for the all-around title, and finished behind Biles at nationals in 2015 with a silver medal. She was set to compete in Everett this weekend, but a minor knee injury kept her from competing.

“There’s a delicate balance for coaches, and they have to be smart,” Wieber said. “It’s a fine line between pushing to get to the next level with skills and routines, and letting them rest.” While it might seem like the right thing to some coaches to push athletes until they complete a routine or skill to satisfaction, especially in high pressure situations, Wieber said, that can cause additional and more extreme injuries.

As competition moves closer to the final team selection, Wieber says 2015 American Cup silver medalist MyKayla Skinner is also one to watch, as is uneven bars standout Madison Kocian. With so many strong athletes in the field, Team USA coaches have to see a demonstrated need for a specialist for her to have a shot.