For Mariners, Griffey is always welcome

Icon Ken Griffey Jr. threw his ceremonial opening pitch for a strike, and hit a few high notes as well in his presser before the largest regular-season crowd in Safeco history.. 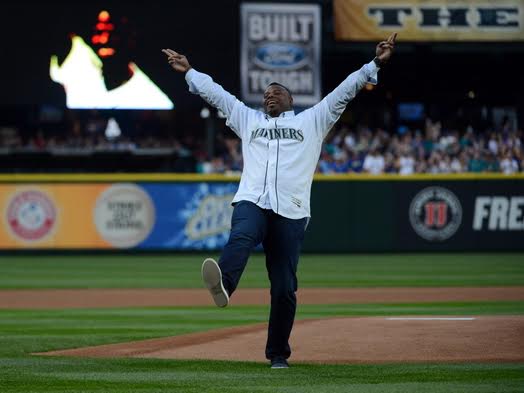 To Mariners fans, Ken Griffey Jr. will always be The Kid, rounding third and heading for home. To the ball club, however, Griffey is already creating a space for himself in its future. During Griffey’s traditional trip to spring training in Peoria, Griffey wound up speaking to the team during a morning meeting, proving that he may have more to offer the club than just an iconic legacy.

“I said, ‘This is your team,’” Griffey recalled in a press conference before throwing out the opening pitch Friday. “’This is you guys’s team. This is your era, your city. You’ve got to go out there and play and have some fun.

“‘You’re a fairly young team like we were. You’ve just got to be behind each other, everybody’s going to make some mistakes. If I can help in any way, they know how to get in touch with me, and I’m here.’

“That was it, and then they went about their meeting, preparing for their day, which was pretty cool.”

“This is your team.” Words that echoed what Ken Griffey Sr. once told his son as they sat beside one another in the Mariners dugout in 1989, a moment eternally imprinted on the sporting landscape of Seattle.

“We’re starting to build relationships with alumni here,” he said.

Griffey’s genes helped make him the near-perfect ballplayer, but his experience is far more readily passed on.

“I knew what it took to be a big-league ball player at 14 years old,” he said.  “Some of these guys are 22 and don’t have a clue about what it takes to get there, so if I can give that knowledge to kids who are 17, 18,19, 20, and they can understand it, then maybe they can get on the fast track to the big leagues to achieve their goal.”

Even after his near-unanimous election to the Baseball Hall of Fame, it feels odd to consider Griffey an alumnus of the Mariners or even baseball. When he strode toward the mound Friday wearing a 24 jersey, in front of the largest regular-season crowd in Safeco Field history (47,065), he almost looked like he might pick up a bat.

When his off-speed pitch, thrown from in front of the mound — “I wouldn’t want a pitcher to mess up my batter’s box,” he said — landed for a strike in the glove of “catcher” Felix Hernandez, Griffey re-created the King’s perfect-game victory pose, the generations connected.

Seattle’s door will always open at Griffey’s approach. The symbolic value of the legend is something the club wraps itself in, sometimes a little desperately. Throughout the game Friday, the jumbo screen replayed famous moments from Griffey’s career. A “countdown to Cooperstown” ticker has been erected on the fascia in right field, marking the days until Griffey’s formal induction to baseball eternity.

Whether it is the lifetime of experience, or his irrepressible smile and ability to bring crowds of Mariners fans to their feet wherever he goes, Seattle will give Griffey every opportunity he wants to help them recapture the magic of the ‘90s. It is no longer Griffey’s team, but there will always be a spot for him in SoDo.