Dae-Ho Lee’s mammoth home run was the lone baseball firework on Opening Night for the Mariners, who fell 3-2 to a ninth-inning rocket launched by the Oakland A’s. 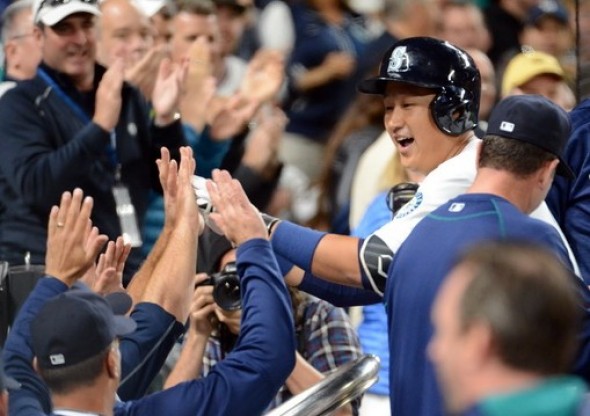 In the fifth inning Friday night, after large Korean import 1B Dae-Ho Lee cranked a monumental homer to center for his first major league hit and the Mariners’ first run, the biggest regular-season crowd in Safeco Field history (47,065) was about to go into magnum giddy. The Mariners put two more runners for the lineup’s 2-3-4 hitters.

But all the bigness, grandness and even warmness (67 degrees) of Opening Night went small, lame and cold.

Thereafter, the bats fell silent, the bullpen gave up its first run of the season and the A’s slipped away with a 3-2 win. The feel-good Hollywood ending that seemed imminent instead dissolved meekly.

Just when you think you may have caught the pretty girl’s eye, you walk into a light pole. At least the A’s had to think it was funny.

“I thought we were in a good spot to take big advantage and put a big number up there,” said Scott Servais, a loser in his home debut as Mariners manager. “They got out of it.  That happens. We didn’t finish off the inning.”

In the great, foolish baseball tradition of attempting to attach omens to pageantry of the season — how Druid of us — either of disappointment or joy gets magnified. Logically, there was nothing more or less to be made of the evening’s developments, but the emotions insisted on trumpets.

After the season began with a 2-1 series win in Texas, followed Friday by a stout six innings from young starter Taijuan Walker and the epic blast from the 33-year-old Lee in his first MLB home game, success seemed ordained.

But a total of four hits is unworthy of ordination.

“Overall we didn’t swing the bat that well,” Servais said.

One guy who did, Lee, was two months ago an unlikely character to have a role in the drama. Something of a legend in Japanese ball, Lee seemed too big (then 285 pounds), slow and old to be able to make the transition, as well as hold a position.

But as he lost weight and gained confidence around first base, he won the platoon job over Jesus Montero. Still mostly a mystery, Lee pulled back the curtain some Friday. After a bad-looking strikeout in his first at-bat, he awed the sellout with his moonshot to center, then nearly struck again with a deep fly-out.

“I swung with confidence,” Lee said through an interpreter. “I felt very happy, but our team still lost.”

“That’s a long way,” Servais said. “He crushed the ball. And also had a very good at-bat his next at-bat, which was great to see.

“He’s a big-time player. He just hasn’t been in this country very much. The power is there. It was nice to see tonight. I’m sure it’s a huge confidence-builder for him and for everybody on our club.”

The A’s had a surprise of their own — Chris Coghlan, a utility outfielder the A’s picked up in a little-noticed spring training trade with the White Sox. Facing new closer Steve Cishek with one out in the ninth, Coghlan, an eight-year veteran with his third team, crushed the ball high over the right field fence to decide matters.

“It was too good of a pitch,” Cishek said. “I was trying to elevate it a little bit more and I didn’t get it up there. He put a good swing on it.

“I felt great out there. I just didn’t execute that pitch.”

The run was the first given up by the Mariners’ bullpen, the biggest source of personnel anxiety entering the season, in 11 innings. A proper padding of the score in the fifth would have rendered it meaningless, but that retro thinking gets the Mariners nowhere.

At least the festivities, including Ken Griffey Jr.’s appearance for the first pitch, impressed the newbie boss.

“It was great,” Servais said. “There was a lot of electricity in the ballpark tonight, as there should be. Fans were into it.

“We didn’t give them a lot to cheer about offensively. We’ll play a lot of one-run games. Just can’t get it done, sometimes.”

Four hits, even if one is still on its way to Seoul, rarely is a way to get it done.