Nathan Karns was in trouble from the beginning, and the hitters for a second night in a row could do almost nothing against an ordinary A’s pitcher, this time Rich Hill. 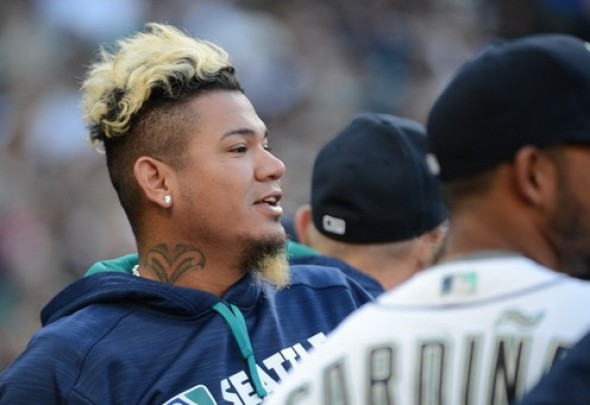 Felix Hernandez takes to the mound Sunday, but probably with his hat. Then you’d miss his blonde stylings. / Alan Chitlik, Sportspress Northwest

Never in it because journeyman Oakland starter Rich Hill baffled them, the Mariners (2-3) lost 6-1 Saturday night at Safeco Field (box), their second in a row to the Athletics. After four hits Friday night, the Mariners had five Saturday.Essential moment

Oakland RF Josh Reddick hit his second home run in as many nights, a two-run shot for a 4-1 lead in the top of the fifth. With the Seattle bats faltering, the home run put the game out of reach.

RHP Nathan Karns made his Mariners debut, and left a lot of room for improvement. Karns was in trouble from the outset, giving up four first-inning singles to fall behind 2-0. He needed 35 pitches to get through the frame. Karns lasted five innings but left with the Mariners trailing 4-1. He allowed four earned runs off seven hits, striking out six with one walk, and threw 95 pitches.

The once-untouchable bullpen gave up a pair of runs. LHP Vidal Nuno made his season debut and offered doubles to the first two hitters he faced.

C Chris Iannetta got things going in the right direction with a solo home run in the second inning, but Seattle had very little offense after that. Hill allowed one run off five hits while striking out 10. Seattle struck out 12 times.

“It’s only five games into the season, and there’s a lot of baseball left, but the offense just hasn’t been able to get anything going.” – manager Scott Servais

2B Robinson Cano has hit safely in all five games this season and has a 21-game hitting streak, dating back to the end of last season . . .  3B Kyle Seager went 0 for 3 and is hitting .167  . . . Oakland CF Coco Crisp stole two bases, including the 300th of his career in the first inning. Crisp is one of 164 players, nine of which are active, who have stolen 300 bases in their career . . .  The Mariners won each of their final three series against Oakland last season. Saturday’s loss earned the A’s the series win . . . With the entrances of Karns and Nuno, all 25 players on the roster have seen action.