Simone Biles did all that was expected of gymnastics’ reigning superstar Saturday at the Pacific Rim Championships in Everett, also helping Team USA to the gold medal. 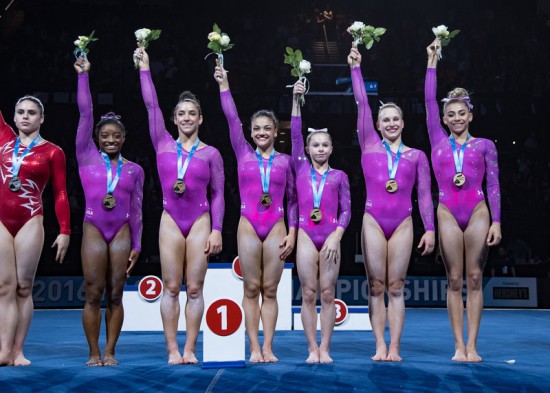 EVERETT — As Simone Biles completed a dismount with a flourish from the balance beam Saturday night, cheers erupted around Xfinity Arena. Except the competition hadn’t started yet and she completed only a few skills of her routine.

It was moments into warm-ups for the Pacific Rim Gymnastics Championships, and Biles already captured the attention of the crowd. There was no question that all eyes were on her, all the time. She completed a tumbling pass in a warm-up rotation with the rest of her teammates and a dozen iPhone cameras started recording.

Everyone here had the sense that they were witnessing a moment in history. She’s the most decorated champion in the gymnastics world. Even those whose records she shattered recognized it.

“It’s hers to lose. Well, I hate to say to lose . . . It’s hers to take, if she wants it,” former Olympian and two-time world champion Shannon Miller told Sportspress Northwest before the competition. She referred not to the Pacific Rims, which she counted as a factor in Olympic team selection, but to the 2016 Olympics in Rio.

As fans waited for the competition to start, Simone Biles was on the center screen for a split second, and shrieks followed.

Throughout the evening, Biles was consistent across all events, with high marks on execution, and big points for the difficulty of routines. She performed two vaults, alone among her teammates to do so, which allowed her to qualify for the individual vault competition Sunday night.

The first was the vault she performs regularly. The second, called a Cheng, was new for her. Its difficulty was valued at 6.4, one of the highest possible. Team coordinator Marta Karolyi said later that it was added to give her an edge going into the Olympics. 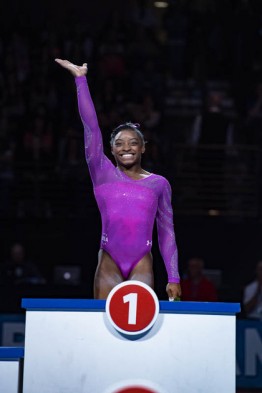 During Biles’s balance beam routine in the final rotation, the arena was silent. The floor routines were finished for the night, so there was no music, as there was for everyone else. Only occasional cheers punctuated the stillness, along with endless camera clicks following every moment. A particularly difficult skill earned cheers from the crowd and her excellent dismount drew roars, as well as hugs from all of her teammates.

Brenna Dowell finished the meet with the final routine, then medals were awarded. Biles earned gold with an overall score of 62.45, having pulled away steadily from silver medalist teammate Aly Raisman, second at 59.90.

Because only two gymnasts from one country can medal in the all-around, Japan’s Nagi Kajita picked up the bronze. Without that rule, the U.S. would have finished first, second, third (Laurie Hernandez), fourth (Brenna Dowell) and fifth (Ragan Smith).

Team USA easily took the team gold over Canada, 243.20 to 219.10. Australia, which competed in the afternoon session, picked up the team bronze.

After the meet, Biles said she is looking to improve her 2½ vault, the first one of the evening, and to show more emotion in her floor routine. Along with her other vault, the floor exercise routine and music were new, a samba-inspired dance chosen to go over well in Rio. In the gym, she said, they don’t practice routines with facial expressions, so Saturday, she was very focused on her face.

For her part, Karolyi was happy with Biles’s performance, but offered that without perfection, there was more work ahead. “She will be more outgoing next time,” she said, hinting at the same critique Biles gave of her own performance.

“She did an excellent job, and for her, this was a very important moment,” she said. “Selection starts now, and she was very poised and artistic . . .  She did a good service to herself, and she’s right in there on the list.” The list, that is, of those in contention for the Olympic team.

Also on that list is Ashton Locklear, whose superlative uneven bars performance topped both Dowell and Biles. With so many excellent gymnasts in contention, Karolyi told Sportspress Northwest that it’s possible Locklear might get a spot as a specialist.

“We don’t know at this time, but if it’s necessary, we will use a specialist,” she said. Both Locklear and Madison Kocian have excelled at uneven bars. The decision on the roster will come down to which gymnasts have the best chance to deliver “absolutely high” scores on every event for Team USA.

Sunday night, the best  on each apparatus will compete for individual medals. The Senior Women’s Artistic Gymnastic events are at  6 p.m. session with medals awarded after. Tickets are still available online and at the door.

Julia Wayne is a Seattle native who cherished every moment of the 1995 Mariners season and still has some words for Bobby Ayala. A life-long gymnastics lover, she fondly remembers Dominique Moceanu’s floor exercise in the 1996 Olympics, and wonders if there will ever be another three-time Olympian gymnast like Dominique Dawes. Her work has been published in Seattle magazine, Seattle Weekly, Eater Seattle, The Stranger, Sip Northwest, Cidercraft Magazine, Stackedd Magazine, Inside Right Wrist and Edible Seattle.