The Mariners had a throwback weekend against the Oakland A’s — to the offense in 2015. A 2-1 defeat Sunday to another obscure starter left a clubhouse full of shrugs. 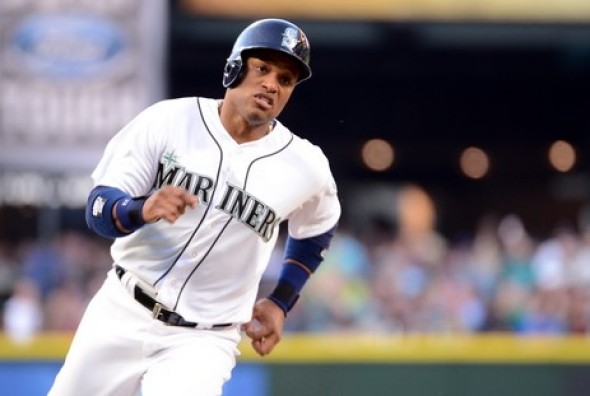 A rare glimpse of a Mariner running on the basepaths this weekend. / Alan Chitlik, Sportspress Northwest

After the epic collapse by Jordan Spieth on the back nine of the final day of the Masters, the dull thud registered Sunday afternoon at Safeco Field will be little noted nor long remembered.

Especially by Robinson Cano. He greeted the three-game weekend sweep by the Oakland Athletics, completed with a 2-1, 10-inning victory (box) that wasted a seven-inning, two-hit shutout from Felix Hernandez, with a shrug stronger than anything produced by the Mariners offense.

“For me, I don’t worry about anything,” said Cano, who went 0-for-4 Sunday, ending a 21-game hitting streak with a 2-for-12 weekend.  “We lost the series. Gotta go home get some rest and be ready for tomorrow.

“We got 156 games left. We just got to be positive, not worry about what happened last three days.”

Probably the three worst carryovers from the the untidiness of the past season clouded up what had to have been the best opening-series weather in club history (although the Kingdome was always 68 degrees).

The Mariners failed again to support another quality outing by Hernandez, which put pressure on a suspect bullpen to be perfect, because the Mariners offense went 0-for-10 with runners in scoring position. Look familiar?

In the three games, the Mariners had 15 hits and four runs, three earned. The only run Sunday was unearned: A sixth-inning error when A’s 2B Jed Lowrie butchered a fairly routine grounder by SS Ketel Marte.

That was good for a 1-0 lead and allowed Hernandez to at least leave after seven innings with no chance for the loss. He came out after 10 strikeouts and 99 pitches, which, in light of events, was about 20 pitches too early and a shame.

As A’s manager Bob Melvin put it, “You almost feel like there’s momentum in your dugout, just by the fact that he’s out of the game.”

His point was made when reliever Joel Peralta, who came on in the eighth because usual set-up man Joaquin Benoit wasn’t available, gave up a game-tying solo homer to No. 9 hitter SS Marcus Semien to tie.

In the 10th, reliever Nick Vincent broke the tie when he did same with leadoff hitter Coco Crisp, a booming shot to right that sent many in the crowd of 30,384 into the traditional pre-scurry ahead of the bottom half-inning. It was Crisp’s 118th homer in his 15-year career.

“A lot of empty outs,” he said. They couldn’t even try anything because they had multiple baserunners in an inning only twice. Even more aggravating for the Mariners was that the A’s starting pitcher, Chris Bassitt, was no more accomplished than his immediate two obscure predecessors, Rich Hill (Saturday)  and Eric Surkamp (Friday).

Without warning, they turned into Barry Zito, Mark Mulder and Tim Hudson, the A’s Big Three of 20 years ago.

Or, more reasonably, the Mariners offense reverted to 2015.

Asked whether there was debate about letting Hernandez pitch the eighth inning, Servais said it was discussed.

“We had a plan going in and we talked about it,” he said. “We all agreed it was the best direction.”

In fact, the sweep — the first at home from the A’s since 2012 — didn’t turn on Hernandez’s unwillingness to go 200 pitches or until the A’s next run-allowing error, whichever came first.

It turned on an offense as futile as the 2015 version. Still, the moment is kind of weird, even for the Mariners’ long history of weirdness.

They can’t fire the manager six games into his career. They certainly won’t fire the hitting coach, because he’s Edgar Martinez. They can’t have a closed-door meeting this early. Servais can’t change much in the lineup when he barely knows the team under real-game conditions.

“We’re just not getting it done with the bats right now,” Servais said, shrugging. As Cano shrugged.

It’s April 10. Shrugs are all they have.