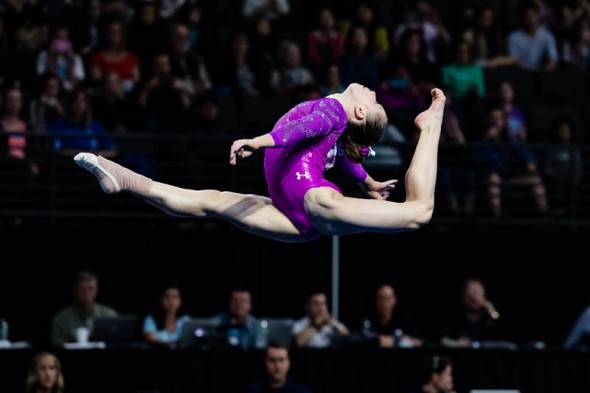 EVERETT — On Sunday night at Xfinity Arena, 32 women gymnasts stepped apart from national team affiliation to show their individual skills in the final competition of the Pacific Rim Gymnastics Championships. For once, Simone Biles didn’t dominate the conversation. She wasn’t even in it.

Sunday morning, USA Gymnastics announced neither all-around gold medalist Biles — who qualified for the individual events in all but bars — nor third-place finisher Laurie Hernandez would be competing in the evening’s events.

“After consultation with the athletes and coaches, we have decided that it is in the best interests of Simone and Laurie for them not to compete in the individual event finals today,” read a statement from National Coordinator Marta Karolyi. “The Olympic year is a long one, and we are excited to provide the rest of the team with another important competitive opportunity. We are very proud of the entire team’s performance and want to make sure that we keep everyone in their optimal physical condition.”

With Biles out of the running for vault, no American gymnasts were in contention for medals on that apparatus. In order to qualify, gymnasts had to complete two vaults during Saturday’s team competition. Only Biles did so for the USA.

In the places of Biles and Hernandez for beam were Ragan Smith and Aly Raisman. Stepping in on Biles’s absence on floor was Brenna Dowell, who competed alongside Raisman. Ashton Locklear and Dowell, who had the highest scores on uneven bars Saturday, were unaffected by the change.

“It was a little bit easier for me not having to think about Simone doing her  2½ and sticking her vault and her winning it,” Olsen said of her competitor’s absence. “It’s a good opportunity for me to improve and the crowd was amazing.”

Locklear was the first U.S. competitor of the evening, nailing her uneven bars routine with a score of 15.625 — a slight improvement over her first-place finish Saturday (15.55). On Dowell’s turn, a missed grip on an element called a Church resulted in a devastating fall. 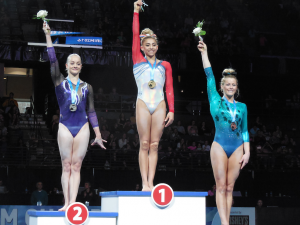 Though she got back on the bars and finished with a perfectly stuck dismount, the damage was done. She finished fifth with a 14.0. Locklear was followed for silver by Larrissa Miller of Australia (14.675) and Brittany Rogers of Canada (14.6).

“I don’t know what happened,” Dowell said. “It felt good when I let go, and it was a little far, but not too far for me to not catch it. I think I kind of slipped off the bar a little bit, and I was definitely surprised when I hit the mat.”

Of her improved performance, Locklear said despite not landing her dismount flawlessly, she hit the handstands she hadn’t fully extended during the previous night’s competition, leading to her high score.

Heeding her coach’s advice, she said, “Marta told me that I didn’t need to rush, and that when I get worried, I tend to rush my skills. She told me to do it exactly like practice, and I did.”

On balance beam, Raisman’s routine was solid from start to finish, with only slight wobbles on a few skills and a step-out on her landing. Her score was initially issued at 14.8, but an inquiry to judges resulted in an increase to 15.1, with an amended difficulty level raised from 6.2 to 6.5.

Smith topped Raisman’s score as the final competitor of the evening on beam with a score of 15.225, despite a slightly lower difficulty score (6.4). She told reporters she had found out she would be competing on beam at 11:30 p.m. Saturday, and that while “it was fun” to beat Raisman, she was appreciative of her teammate and proud to be competing with her.

In preparation for the next event, the Classic in June, Smith said she plans to work on improving her execution score with cleaner moves, possibly adding more elements to increase difficulty as well.

Raisman’s floor routine was thick with audience involvement, in the form of enthusiastic clapping along to the music and a lot of cheering during key moments. Her score of 15.1 secured the gold. Dowell bounced back from her bars disappointment with solid tumbling passes for 14.825 and the silver. Canadian Olsen took bronze with a 14.4. 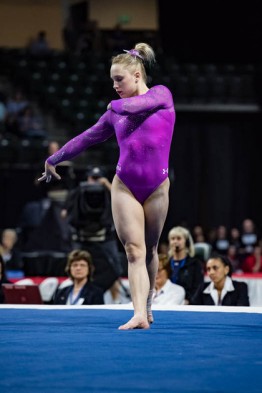 Brenna Dowell recovered from a fall on uneven bars to win a silver medal on floor. / John Cheng, USA Gymnastics

Going into the event, Dowell said she wasn’t concerned that her fall on bars would carry over.

“I just tried to turn the page, and I knew that it was a completely different event, so I could do what I did in practice and do well,” she said.

In the absence of their teammates, the four competing gymnasts said the two Americans were still there in spirit. “I could hear them yelling from the box up top and it made me fired up. I was just, like, ‘I can do this’,” Smith said.

Raisman said she was glad to have the extra practice on balance beam. “Laurie did so well in Italy and she did so well last night. Marta’s always testing us, so I just wanted to do good,” she said.

Despite the last-minute cancellation of the U.S.’s top athlete in Biles, a representative for USA Gymnastics said she hadn’t received complaints from fans.

“These are true gymnastics fans, and they understand that in an Olympic year, precautions have to be taken to keep our gymnasts healthy,” she said. “Rio is the ultimate goal, and they know that.”

Julia Wayne is a Seattle native who cherished every moment of the 1995 Mariners season and still has some words for Bobby Ayala. A life-long gymnastics lover, she fondly remembers Dominique Moceanu’s floor exercise in the 1996 Olympics, and wonders if there will ever be another three-time Olympian gymnast like Dominique Dawes. Her work has been published in Seattle magazine, Seattle Weekly, Eater Seattle, The Stranger, Sip Northwest, Cidercraft Magazine, Stackedd Magazine, Inside Right Wrist and Edible Seattle.