Sunday’s loss was the 45th for Felix Hernandez in which he gave up one run or less. No pitcher in baseball history has had a more futile career so young. But he’s turned 30. Do the Mariners hear his clock? 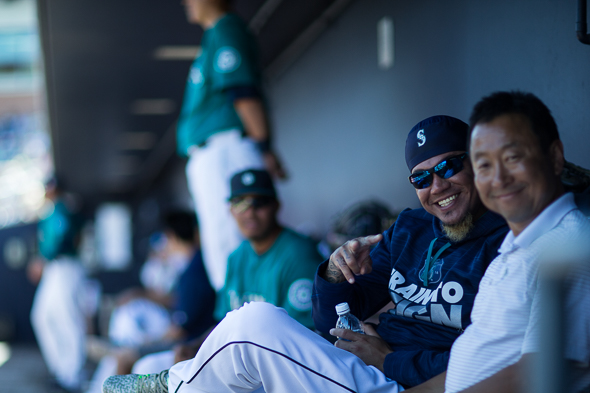 Why is this man always smiling? / Drew McKenzie, Sportspress Northwest

When the Mariners in the 1990s were scoring piles of runs but had little in the way of mound help, Ken Griffey Jr. famously once asked, “Where’s my pitching?”

Two decades later, with a park that plays completely opposite of the Kingdome, the team is reversed: Way more pitching than hitting.

To which Felix Hernandez asks, “Where’s my hitting?”

Actually, he didn’t say that. He could have. Probably should have. But that’s not how The King rolls.

After watching the offense fail Hernandez miserably in his first two outings of 2016, it is Mariners fans who are entitled to pick the scab. They are free to say, “Where’s his hitting?”

Yes, it’s early April. Yes, it’s a long season. Yes, a lineup this experienced, with a club-record $134 million payroll, is more likely than not to improve.

In the season opener in Texas, he had a 100-year loss: First pitcher in baseball history to lose a season-opening one-hitter of at least six innings.

The acme of futility. For years, so it has been.

The Mariners’ futility recalls comedian and rant specialist Lewis Black’s finger-wagging scold when the government comes out with another futilely optimistic expression:

Stop it! Just come out and say we’re not going to do anything! You know nothing’s going to get accomplished! You know it doesn’t matter whether something’s accomplished or not!

That thought occurred watching Griffey Friday throw out the ceremonial first pitch to Hernandez, catching behind the plate: So much celebrated optimism surrounded the greatest talents of their generations, and across four decades, there was so little to show for it.

The pair combined for 18 playoff games, all Griffey’s. None of them in a World Series.

The premise was that his game Sunday represented the 45th start in which he allowed zero runs or one run and didn’t get credit for a win. Among active pitchers, only the Diamondbacks’ Zack Greinke shared similar numbers, thanks mostly to the seven years he spent in Kansas City when the Royals were terrible.

Based on a metric called Game Score, which calibrates pitching stats on a zero-to-1oo scale with the average being 50, ESPN calculated that Hernandez, because he was pitching slightly better, yet getting less results, was the unluckiest pitcher in MLB history.

Colleague Steve Rudman last season — the subject seems to come up annually — calculated the same numbers slightly differently to conclude that, based on unlucky game outcomes as a percentage of total games pitched, Greinke (13.8 percent) barely edges Hernandez in the dubious achievement (updated through 2016):

It’s safe to say that, because Greinke is two years older and now playing with better teams, and Hernandez keeps wanting to stay with the Mariners, The King will eventually claim the title Unluckiest Pitcher on the Face of the Earth (h/t Lou Gehrig).

Difference-making talents come along so rarely — especially with the Mariners’ dubious history in player development — that a failure to capitalize on their prime productive years is a profound shame.

In Griffey and Hernandez, the Mariners grew their own. But those examples are few and far between in Seattle, forcing the front office to mortgage the future with huge long-term deals to free agents like Robinson Cano and Nelson Cruz.

It’s the hard way to do the business of baseball. It’s how the Mariners have come to be the oldest team, 30.1 years, in MLB by average age in 2016.

Hernandez last year had his highest ERA (3.53) since his age-21 season of 2007, largely because of some horrific innings where he lost control of the ball. Whether those games were outliers or omens remain to be seen, but it is not unreasonable to say that career decline has begun.

Whether the decline will be gentle or precipitous also is not known, but getting stiffed by your teammates 45 times has to take its toll. Unlike Griffey, Hernandez has not betrayed a single moment of aggravation at his circumstances. He continues to be the ultimate supportive team guy.

Maybe it’s time for Hernandez to call out his clubhouse, although a cry of “win one for Fifi!” sounds a little uninspiring. Frankly, there’s not much else to be done. It’s already an experienced team, and there’s no hot prospect on the farm likely to be above major league average.

True, it is early in the season.