Pinch-hitter Dae-Ho Lee chopped a shoulder-high fastball into the bullpen in left as the Mariners ended an embarrassing five-game losing streak with a 4-2, 10-inning triumph over Texas, 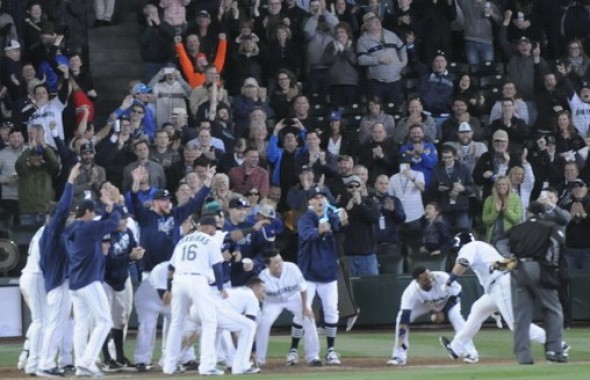 Inserted as a pinch hitter for Adam Lind in the 10th inning, Dae-Ho Lee finally gave the Mariners a reason to celebrate on the homestand. His two-out home run off Jake Diekman gave the Mariners a 4-2 victory over the Texas Rangers Wednesday in front of 15,075 at Safeco Field. Seattle’s win snapped a five-game losing streak, the longest skid in franchise history to commence a home season (box). At 3-6 with a nine-game road trip looming, the Mariners avoided their first 2-7 start since 2011.

Robinson Cano, who belted his fifth homer of the season in the fifth inning to give the Mariners a 2-1 lead, led off the 10th with a routine fly out. After Nelson Cruz reached on an error, Lee jacked an 0-and-2, shoulder-high fastball into the Seattle bullpen in left and was mobbed at home plate. It marked only the third walk-off pinch homer in franchise history.

Ken Phelps had the first in 1986 against Bryan Kelly of the Detroit Tigers in a 3-2 Seattle win. Kendrys Morales hit the other, a three-run, 10th-inning blast off Grant Balfour in 2013 for a 6-3 win over the Oakland Athletics.

The Mariners had multiple opportunities to put runs on the board but came up short. In the first, the bases were loaded for Kyle Seager, who hit into a double play after working Texas starter A.J. Griffin to a 3-and-0 count. In the third, two were aboard with one out, but Seager banged into a second double play. In the seventh, Cruz fanned for the third out with runners at the corners.

Cano’s homer marked his third hit of the six-game home stand and came after an 0-for-14 skid . . . Franklin Gutierrez is 2-for-2 as a pinch hitter after driving a single to left in the seventh inning (hit for Seth Smith) . . . The Mariners won despite going 1-for-9 with runners in scoring position. They finished the home stand 4-for-36 (.111) with RISP . . . Nori Aoki had Seattle’s only multi-hit game, going 2-for-5 to raise his average to .278.

Starter Taiwan Walker worked six innings, allowing one run on five hits with four strikeouts and a pair of walks. He departed with a 2-1 lead after throwing 108 pitches, 30 in the first inning . . .Vidal Nuno produced a 1-2-3 seventh and gave way to Joel Peralta, who gave up the game-tying home to Delino DeShields in the eighth . . . Closer Steve Cishek (1-1) collected the win with two innings of scoreless relief that included three strikeouts and no walks.

“We had some concerns in spring training about how (Lee) was going to handle the velocity. I don’t know how he got on top of that pitch, but he did. Thank God, he got it.” — Mariners manager Scott Servais

“This was really a great effort by our club. Walker was really awesome. He stepped up and got some big outs. We really needed this one. You’ve got to show up and find a way to win, and today we did that.” — Servais

“We really needed this one. Hopefully, it’s going to continue for a long time. Hopefully, today, we started something really good.” — Cano

Lee spent the past four seasons in Japan after playing 11 years in his native South Korea . . . The Mariners collected their first stolen base of the season in the fourth inning when Leonys Martin swiped second, a theft aided by Texas starter Griffin, who threw to first instead of second as Martin started his steal attempt . . .  Prior to the game, Servais said he was uncertain as to when LHP Joaquin Benoit will pitch again. Benoit has been day-to-day with shoulder stiffness.

The Mariners, off Thursday, begin a three-game series at Yankee Stadium Friday at 4:05 p.m., PT. RHP Nathan Karns will throw opposite RHP Luis Severino. Next, the Mariners will move to Cleveland for a three-game set and then to Anaheim for three against the Angels.