The wretched Sacramento Kings fired George Karl Thursday, but they know not what they do. The ex-Sonics coach is one of the most intriguing characters ever to grace Seattle sports. 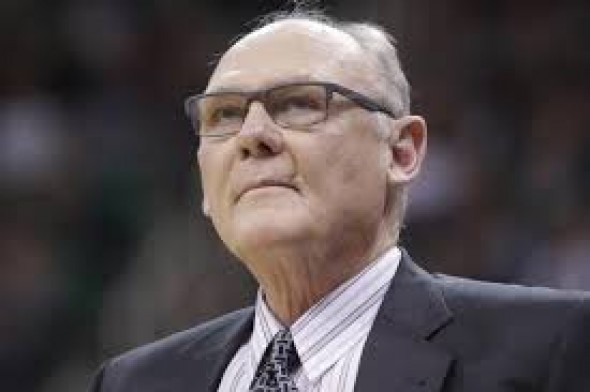 While everyone else following the NBA is busy icing wrist tendons from waving goodbye over a whole season to Kobe Bryant, I use the back of my wrist to wipe away a tear over yet another firing of George Karl. He coached the Sonics from 1993-98 in a way that made a Seattle fan never take his or her eyes off them, for fear of missing an ascent of Everest or a fall into the Grand Canyon.

He was ousted Thursday from his job as coach of the one-time, Next-Gen Sonics, who are known elsewhere as the Sacramento Kings. That was the franchise that arena developer Chris Hansen attempted to poach in 2013 for Seattle, before he was thwarted by local fundraising and NBA Commissioner David Stern.

The Kings finished 33-49, their 10th consecutive losing season, with an amount of controversies, disruptions and mayhem sufficient to delight anyone with a passion for the perverse. As always, Karl was either the antagonist or protagonist in nearly all of the dramas, sometimes both on the same day.

In Vivek Ranadive, the tech titan whom Seattle fans may recall as the chief whale wrangler in the drive to save the Kings, Karl had the worst kind of boss for him — a know-nothing egomaniac of the Ted Stepien/Michael Dolan/Donald Sterling class who thinks he knows everything.

In Vlade Divac, he had a former star player for the Kings who had never been a general manager.

Karl never managed up as well as he managed down. He had no allies in a franchise that continues to operate like a bathtub full of alligators. So it was no surprise he was a quick burn. The record didn’t help — he was dumped after 112 games in Sactown, 44 of them wins.

Yet Karl, despite five previous firings that should have given him rich experience in how to tell the precise arrival time of the train that was about to strike him, still sounded bewildered.

“It’s the most wins (33) they’ve had in eight years,” he told reporters early in the week. “It’s an offensive team that’s very close to being a very good offensive basketball team. It’s a defensive team that’s better than people think it is. It does need some adjustments but can be adjusted very easily and I think very quickly in the summer.

Karl has always been a frequent player of the victim card. In Seattle, he portrayed his tormentor as team president Wally Walker, who was a graduate of the University of Virginia while Karl attended the University of North Carolina.  So their relationship was doomed from the moment the fight songs broke out.

But somehow it survived 6½ tumultuous years that produced the most spectacular hoops in the Sonics’ 41-year run.

No disrespect to the 1979 champions, but the Karl-era Sonics featuring Gary Payton and Shawn Kemp were always five stars on the Thai-restaurant menu, even if they made only a single Finals appearance.

If some City Council members wonder why some citizens care so much about the return of the NBA, well  . . . you hadda be there.

I miss Karl. He was one of the most compelling sports characters to pass through Seattle. Passionate, volatile, brilliant as he was self-destructive, and often incorrigible, Karl was a writer’s dream.

I remember entering practice the day Detlef Schempf started up his Sonics career after a trade from Indiana. Knowing him from his days at the University of Washington, I reached out my hand for a shake.

Karl moved over to knock away Schrempf’s hand.

That was often how it went — right to the edge.

But it was fascinating. I once asked then-assistant coach Dwane Casey, now with the Atlantic Division-winning Raptors in Toronto, how it was that Karl and Payton managed to co-exist with such volatile personalities.

“Gary,” said Casey, “believes that George is actually crazy enough to hit him.”

At that time in Seattle sports, Karl was part of a quartet of coaches who were marvelous character studies.

Lou Piniella with the Mariners (1993-2003), Dennis Erickson with the Seahawks (1994-98) and Jim Lambright (1993-98) with the football Huskies, all were guys who left unsanded their rough edges. They were a sort of an ATM for journalists — punch in the right code and a good story comes out. Plus they did some coaching,

The Mariners reached the playoffs for the first time in 1995, the Sonics reached the Finals in 1996 against the greatest NBA outfit of all time, the Chicago Bulls, and the Huskies tied USC for the Pac-10 Conference football title. Erickson never made playoffs in his four years with the Seahawks (31-33), but he was the MVP among Seattle bartenders.

As for Karl, he has survived a couple of bouts with cancer. His son, Coby, went through similar hell. The threat of death has a way of changing things. He’s a little different now.

I would have liked to have seen Karl carry on with the Kings into their new arena in downtown Sacramento next season. He’s the fifth-winningest coach in NBA history. I trust he would have figured it out.

Or blown up. It’s always 50/50 with Karl, which makes him so fascinating.