PBS to air documentary on ‘The Boys in the Boat’

“The Boys of ’36,” a documentary based on Daniel James Brown’s best-selling book about Washington’s 1936 Olympic gold medal crew, will air on PBS Aug. 2. 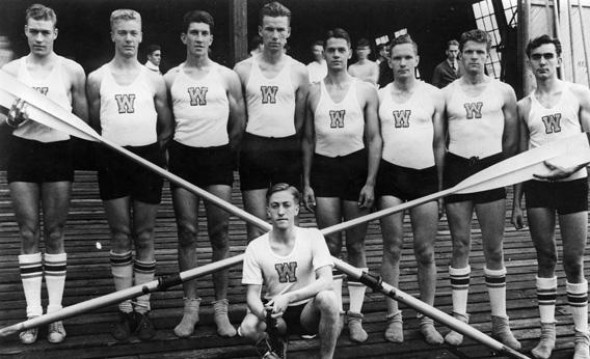 The long-running PBS series “American Experience” will present an hour-long documentary on “The Boys in the Boat,” the best-selling book by Daniel James Brown about the 1936 University of Washington eight-oared crew that won the Olympic gold medal in Berlin.

The program, filmed in cooperation with Huskies rowing, will air at 9 p.m. PT Aug. 2.

According to the UW, current members of the rowing team, wearing period attire and using a pair of restored, wooden George Pocock racing shells, took to the waters of Lake Washington in the fall to provide cinematographers with video of how the 1936 crew might have appeared.

“We were extremely pleased to be asked to participate in this film,” men’s rowing coach Michael Callahan told gohuskies.com. “We take tremendous pride in the rich history of this program and it was a special experience to help to bring that to life.”

“It was fun to get to feel a connection to how things were around here all those years ago,” added coxswain Braeden Daste, who coxed one of the two shells. “It will be cool to see how it looks in the documentary.”

Titled “The Boys of ’36,” the documentary was produced by Margaret Grossi and Mary Carillos and features interviews with Brown, historians and surviving children of the rowers.

The eight-oared crew, which also won the Intercollegiate Rowing Association championship prior to the Olympics, was inducted into the inaugural class of the Husky Hall of Fame in 1979.