Mariners’ one-win homestand and feeble offense prompts question about Safeco’s impact on fly balls. Servais says balls “do hang up there a little bit longer,” but wasn’t going to tackle the marine layer yet. 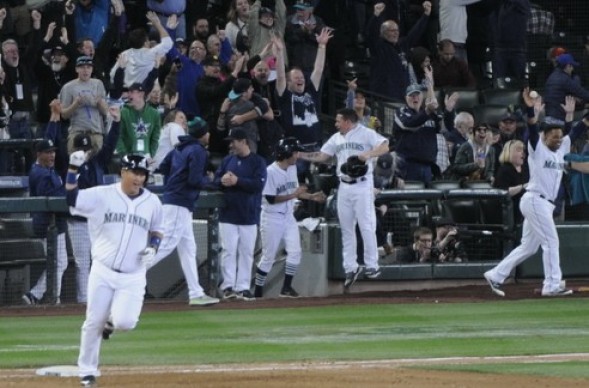 Safeco Field’s reputation as a pitcher’s ballpark has done little to help the Mariners attract premier hitters over the years. First-year manager Scott Servais probably didn’t help matters with comments he made prior to Wednesday’s game with Texas.

Asked if he considers Safeco to be a “fair” ballpark, Servais responded with a question of his own.

Servais did say fly balls “have a tendency to hang up there a little bit longer” at Safeco. Servais, like many others over the years, said balls carry better at Safeco when the roof is closed.

Servais said batted balls do “play a little different, obviously, than at Texas or some of those other places. But I think we’re capable, and our roster’s built, to handle it just fine.”

Servais, who never played at Safeco during his 11-year playing career in the major leagues (all in the National League), added, “The pitcher’s mound is still 60 feet, 6 inches. The batter’s box is in the same spot. We’ve got to do better in the batter’s box.”

The three road games were at the Rangers’ Globe Life Park, a notorious launching pad for hitters. However, it’s worth nothing that Seattle stands eighth in batting away from home (.282) and 27th at home (.170).

The Mariners scored 19 runs in their last two games at Texas, including a season-high 10 April 5. Seattle produced only 11 runs during a six-game homestand, including a high of four in Wednesday’s 10-inning, 4-2 win over the Rangers.

Asked if the team’s hitting woes are mental more than physical, RF Nelson Cruz said, “I cannot tell, but it’s just a few games. If you get a few hits in one game, your average goes up to .300.”

A players-only meeting was held in the clubhouse after the 8-0 loss to Texas on Tuesday. Cruz said the message was simple.

No Mariners are batting above  .300, though Leonys Martin is hitting .296 and providing strong defense in center field. The only other players hitting better than .231 are OFs Norichika Aoki (.278 with an eight-game hitting streak) and Seth Smith (.267).

Cano ended an 0-for-15 skid with his league-leading fifth home run and team-leading eighth RBI Wednesday. Lind and Marte snapped 0-for-14 streaks in the same game. Seattle’s .208 batting average ranks 28th in the majors.

Pudgy first baseman Dae-Ho Lee, the 33-year-old rookie out of the Japanese and Korean pro leagues, circled the bases with a smile on his face after blasting a pinch-hit, two-out, two-run homer to beat Texas 4-2 Wednesday.

Servais said he was initially concerned in spring training about Lee’s ability to hit top-level fastballs.

“The thing that we kept seeing was, he is able to make adjustments,” Servais said. “He cuts down the leg kick, he cuts down his swing to make contact, and he’s plenty strong enough that if he does square it up, he’s got enough power.”

Lee said, “I knew it was going to be a fastball.” Obviously, so did Diekman, but the Texas left-hander did not expect to leave the ball up in the strike zone.

“That was terrible,” Diekman said. “Put it right where he could hit it.”

Taijuan Walker has yet to earn a decision, but the 23-year-old right-hander has pitched well in both starts this season. He gave up five hits and one run and struck out four in six innings Wednesday, though a 30-pitch first inning helped push his final pitch count to 108.

“He really did keep it together,” Servais said. “He’s growing up, maturing before our eyes here.

“He has a chance to have a big year for us. It took him a while (Wednesday). We didn’t see the big fastball until real late when he kind of dug deep and got a little extra, which is nice to see.”

The Mariners are 15-5 in Walker’s last 20 starts. His record in that span is 9-2. Last season marked his first full year in the majors.

“Having a whole year in the big leagues and going through ups and downs definitely helped me with situations (Wednesday) where I needed to keep my cool and make pitches,” Walker said. “I feel like I made pretty good pitches.”

Another impressive pitcher Wednesday was Federal Way native Tony Barnette, a 32-year-old rookie who spent the past six seasons in Japan.

Barnette threw 2.1 innings of one-hit, shutout relief for the Rangers. The Thomas Jefferson High School graduate moved to the bullpen after four years in the Arizona Diamondbacks organization and his first season in Japan.

Barnette said he felt no added pressure playing in front of his father and other family members in Seattle.

“You’ve just got a job to do,” said Barnette, who said his six-year stay in Japan “was a great experience for me and my family.”

Veteran reliever Joel Peralta, filling in for injured set-up man Joaquin Benoit, Wednesday gave up a game-tying home run to the first man he faced for the second consecutive outing.

Servais said the Mariners are hopeful Benoit will be recovered from shoulder and back stiffness in time for the opening game Friday of a three-game stop at Yankee Stadium (4 p.m. PT, Root Sports). Nathan Karns (0-1, 7.20) starts against Luis Severino (0-1, 5.40) in a battle of right-handers.

Servais never played at the new or old Yankee Stadium, so he’s looking forward to managing there for the first time.

“It’s an American landmark,” he said. “It’s as simple as that. Our guys are excited to go back and play there.”