As the Sounders wait for Jordan Morris to start scoring, coach Sigi Schmid has a slow seasonal start to overcome. The debate is on whether to keep starting the rookie, or take off the pressure. 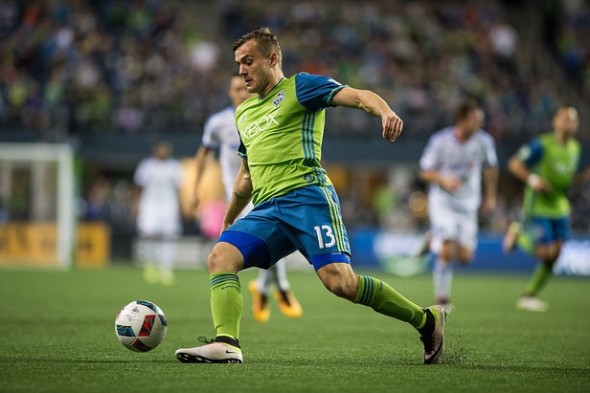 Jordan Morris hasn’t had the blazing start many hoped. It may be time to lay off the gas. / Jane Gershovich, Seattle Sounders FC

After an 0-3 start, the Seattle Sounders have taken four points from their past two matches. Still, Seattle has scored just two goals from open play, and rookie Jordan Morris is still finding his groove at the professional level. The Sounders must now decide if benching Morris is the right move for him and the club.

For veterans, slumps are a part of the business of playing the long MLS season. Captain Brad Evans, who will make his 200th MLS appearance along with Osvaldo Alonso against Philadelphia Saturday (7 p.m., JOEtv), said it’s possible to will one’s way clear of a run of bad form.

“We’ve gone through rough patches here,” Evans said. “It’s all about doing the things that you know how to do well and sticking to your game. Sometimes we get caught up, when you’re in a rut, in trying to do too much. It’s when we get back to basics that we find ourselves on the right side of results and the right side of getting goals.”

The Sounders recently have been on the right side of both, scoring late goals to beat Montreal 1-0 and tie Houston 1-1. Evans and coach Sigi Schmid expressed hope that Chad Marshall’s equalizer in the closing seconds of the Houston game would generate the energy needed to spark Seattle.

The club has been indefinite in its efforts, failing to create scoring opportunities among a front three of unproven Morris, the often-battered Nelson Valdez, and sophomore upstart Aaron Kovar, whose recent starting performances were comprised of equal parts promise and inexperience.

While Evans and other veterans know that slumps are part of soccer life, Morris’s case is different because the youngster has been through so little.

Morris, 21, is a phenomenal talent but hasn’t caught a break. Nerves or bad luck, he hasn’t been able to convert, taking one shot on goal in 342 minutes of play. The club has invested heavily in Morris, but Schmid is no doubt asking himself if what is best for Morris is the best thing for the Sounders.

Schmid is in a catch-22 with Morris: The youngster cannot score unless he is on the pitch, but until he does, he will have difficulty contributing if low confidence is affecting his play. The decision to give Morris more time is complicated by the fact that every selection or omission from the starting lineup can be read as a vote of confidence, or falling out of favor.

Strong performances by Oalex Anderson and Herculez Gomez adds pressure on Schmid to bench Morris. The Sounders sa they see Morris as the club’s future, but he might be unready to shoulder the burden now, especially with the club struggling for points.

The remaining argument for keeping the Mercer Island native on the field is that he’s Seattle’s best option on the wing, even ahead of Anderson or Gomez. From a technical standpoint, that may be true. Gomez, at 34, is not close to Morris in terms of conditioning. Anderson, who has been the marquee player on nearly every team for which he’s played, may not operate as part of a unit as well as Morris.

Anderson’s speed, pace and creativity make him the flashier of the choices, but the level of his play in recent substitute appearances has also suggested that the Vincentian may be deserving of a shot at his first MLS start.

Morris could still develop confidence as a substitute. Clint Dempsey said Thursday that the moment he knew he could make it in the Premier League was when, coming off the bench, he scored his first goal for Fulham in 2007 against Liverpool to save the Cottagers from relegation.

Seattle won’t want the stakes to get that high for Morris’s first goal, but there’s no denying that every start without a goal will draw worried glances from Sounders faithful and pundits alike. Morris will get his goal, but Schmid has a season to manage.