Chad Marshall bagged his second goal of the season, but the real hero was Jordan Morris, the star rookie who finally found the net to provide the Sounders a 2-1 win over Philadelphia.. 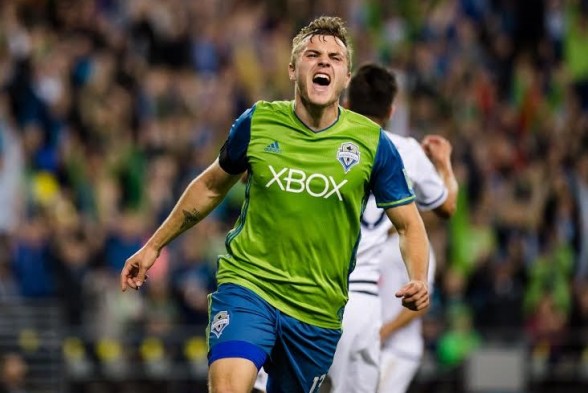 Late in the match against the Philadelphia Union Saturday at the Clink, rookie forward Jordan Morris lifted the weight of SoDo from his shoulders with a poke of his right foot. The 21-year-old opened his MLS scoring account with what proved to be the game-winner as the Sounders dispatched the Union, 2-1.

“It’s always beneficial,” coach Sigi Schmid said. “You can’t score your second one until you get your first one. He’s going to be a lot more confident. There’s a big weight off his shoulders. That weight — each week another five pounds that got added to that . . . you eliminate those fifty or sixty pounds, you can run a lot lighter next week.

“When you’ve been around for a longer time you know that it’s going to happen, it’s just not happening now. You learn to be patient. When you’re young, you’re not very patient; you want it to be yesterday, not tomorrow.”

Tomorrow finally came after 413 minutes of scoreless league play. In the 71st minute, Andreas Ivanschitz chipped a long ball downfield in front of Morris on a full sprint. Morris trapped the ball with his chest, before poking it with the bottom of his right foot with his second touch. The play drew Union keeper Andre Blake off his line, leaving space for the ball to roll into the net as a crowd of 39,620 erupted.

Morris turned his best pro performance, recording three shots on net and generating many more promising opportunities on the end of long sprints downfield for Seattle (2-3-1). When he was substituted off in favor of Joevin Jones to preserve the lead in the 81st minute, the Clink still echoed with his name long after he had celebrated with his teammates on the bench, as well as his father, the team’s doctor, before taking a seat.

His revved-up play was facilitated by a new role as the striker, rather than playing on the wing, with Andreas Ivanschitz on the left and Oalex Anderson making his first MLS start on the right.

Anderson and Morris used their speed to wreak havoc all night on the Union’s defense. Schmid said that the duo took advantage of the high back line played by Philadelphia (3-3-0), opening up channels for them to tear into open space.

As the two found space out wide, more space opened for Clint Dempsey to dribble into threatening areas. The Sounders finished with eight shots on goal, well above the 3.8 the team averaged through its first five matches.

Defensively, the Sounders matched up well against C.J. Sapong, the Union’s striker and main threat. Sapong and the Union controlled the opening fifteen minutes of play, but had difficulty putting shots on net. Seattle’s job was made easier when Roland Alberg, already on a yellow card, scissor-tackled Cristian Roldan from behind while contesting a ball in the 53rd minute, earning him an early march to the dressing room.

Down to 10 men, Philadelphia struggled to maintain its presence in the midfield that had helped them control the game’s early minutes.

Chad Marshall opened the scoring in the 41st minute with his second goal in as many games. Ivanschitz swung in a corner kick from the right side, finding the six-foot-four Marshall’s head at the back post to take the lead.

Two minutes after Morris brought the crowd to its feet, Sebastian Le Toux put hundreds back in their seats, volleying home a header-setup from Sapong. Le Toux, a former Sounder, was soon in a seat as well, as the French captain apparently injured himself on the follow-through and was immediately removed from the game.

Quick concessions are something of a trend for the Sounders this season. In both games of its CONCACAF Champions League knockout round matchup against Club América, the Sounders gave up an answer goal twice within a minute of scoring.

Schmid said the problem was particularly egregious with Seattle enjoying a man advantage, and that the solution would require better recognition from defenders to stay focused after scoring.

The Union overcame shorthandedness to cause a few problems in the game’s closing minutes, but the back line managed to hang on for three points at home.

Seattle hasn’t shaken all of the bones of the skeleton from its 0-3 start, but Morris knocking one in and the free style of play was probably good for a femur and a half-rack of ribs.

If scoring continues to remove weight from his shoulders, Morris may do more than figuratively fly down the field as the season progresses.

The Seattle Sounders announced the slate of full-stadium matches at CenturyLink Field Saturday, including two Cascadia Cup matches and two rivalry games. The full-stadium series opens the Clink from its reduced MLS capacity of 39,419 to its full 67,000 capacity by opening the 300 level of the stadium.

Full-stadium matches are a big part of the reason Seattle has led the MLS in average attendance every year since it entered the league. In 2015, the club set a new league regular-season attendance record with an average of 44,247. The Sounders also enjoy an active 129-game home sellout streak, also a league record.