The Brandon Browner signing is official, and the Seahawks signed four of their own free agents. And Earl Thomas took a helluva photo at his wedding over the weekend in Houston. 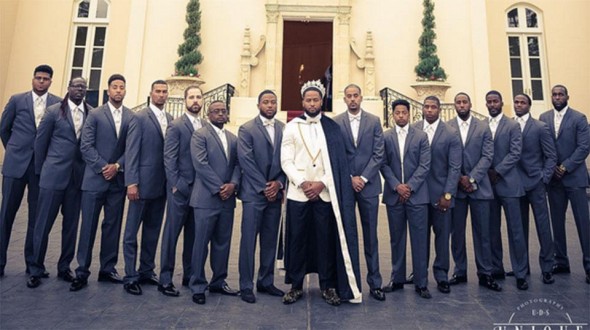 Details about Browner’s deal have yet to be reported. When he was released by the New Orleans Saints in March, Brown was one year into a three-year contract worth $7.75 million, with a 2016 base of $2.75 million. Browner will be 32 in August and is unlikely to receive much in the way of guaranteed money.

Earlier in the offseason, the Seahawks signed CB Jeremy Lane to a four-year deal worth up to $23 million to fill the spot opposite Richard Sherman. Browner could be a backup at corner or slot, and at 6-foot-4 and 220 pounds, also could play in running downs.

Lewis, who came to the Seahawks in 2014 via their practice squad, did not play in Seattle’s first four games last season, but made nine starts thereafter. He reportedly agreed to a $1.671 million tender.

Helfet appeared in 13 games last year with two starts. He caught 13 passes for 130 yards and no touchdowns. He also played in Seattle’s playoff games at Minnesota and Carolina.

Over the weekend, FS Earl Thomas married his high school sweetheart, Nina, in Houston, an elaborate affair that included the groom wearing a crown and cape, for reasons that remain unclear.

Thomas proposed last summer in Orange, TX., the couple’s hometown. They have a child, Kaeleigh Rose. SS Kam Chancellor was in the wedding party.