Majority owner Adrian Hanauer will offer behind-the-scenes insights regarding the Sounders as well as the Copa America Centenario tourney coming to the Clink in June. 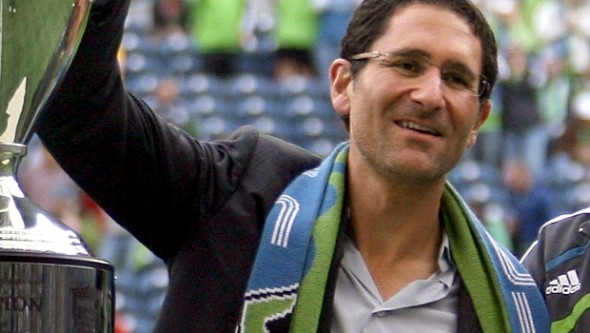 The man behind the remarkable growth of pro soccer in Seattle, and the same gent who feels some heat for the slow start to the Sounders season, is the next guest of The Sports Salon May 4 at the World Trade Center Seattle — Sounders majority owner Adrian Hanauer.

You’re invited to join me in talking with Hanauer about the Sounders, as well as the Copa America Centenario coming to CenturyLink Field in June. It’s the biggest international soccer tournament in the U.S. since the 1994 World Cup, in which America set the tourney attendance record that stands today.

The tourney features Haiti vs. Peru June 4 and Argentina vs. Bolivia June 14, plus a quarterfinal match June 16 that could, depending on tourney results, include the U.S. Men’s National Team.

Helping draw the tourney to Seattle was another mission accomplished for Hanauer, who has has carried the soccer torch for the sport in Seattle for decades. Few Americans have as much expertise in global soccer.

Growing up on Mercer Island and attending the University of Washington, Hanauer watched the North American Soccer League version of the Sounders and became hooked on The Beautiful Game.

He helped found Seattle Sounders FC as a Major League Soccer expansion franchise in 2008, and now leads its ownership after a successful six-year term as general manager.  The Sounders’ average home attendance of 44,247 in 2015 was the second-largest in the Americas, behind only Mexican side Monterrey.

If you haven’t been to a Sports Salon, it’s the best way in town to get to know a sports news maker: On a splendid spot in WTC’s fourth floor restaurant above the Seattle waterfront, enjoy good food and drink in an intimate, happy-hour atmosphere that’s open to questions from the newbie or the knowledgeable.

And yes, you can ask Hanauer how it feels to see the vile Portland Timbers win the MLS Cup ahead of the Sounders. At the Sports Salon, tenderness is not guaranteed.

Tickets in advance can be purchased here.

Need a ride home?  Book your ride home with new WTC member, asterRIDE, and get 15 percent off all services with the promo code WTC15.  To download the app, visit asterRIDE.com. All asterRIDE chauffeurs and taxi drivers are vetted and insured so you can ride in confidence.