Seahawks have fewest No. 1s, by a long ways

Seahawks roster has only one first-round pick, Earl Thomas, yet competes at NFL’s highest level. Chicago is next with four. The team they beat in the playoffs, Minnesota, now has 13. 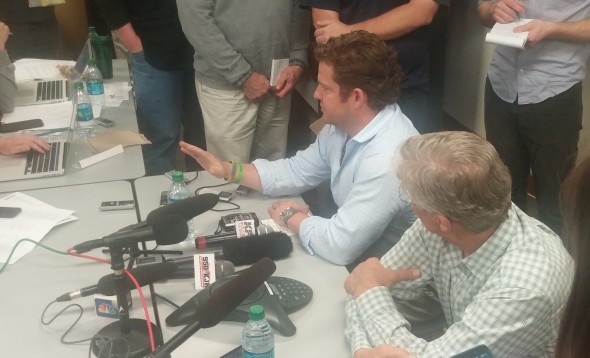 Ask the Seahawks bosses what the most over-rated aspect of NFL life is, and if they’re honest, they’ll say No. 1 draft picks. The Seahawks know that difference-makers – fifth-round picks such as Richard Sherman and Kam Chancellor and third-rounder Russell Wilson — can be found at all levels and beyond (the non-drafted Doug Baldwin, Jermaine Kearse and Thomas Rawls).

With the 26th pick in the first round Thursday, the Seahawks are confident they can trade it down and get the same caliber of player, while picking up additional draft choices. Loading up on picks gives Seattle flexibility to do what it did a year ago — give up three to move up in the third round to grab Tyler Lockett, a Pro Bowler as a rookie.

The Seahawks enter the draft in a unique position. Before delving into what makes them unique, this is how they got there:

After arriving in Seattle in 2010, GM John Schneider and head coach Pete Carroll embarked upon one of the most ambitious roster overhauls in modern NFL history, a purge/rebuild that resulted in 1,304 player transactions over their first six seasons.

Schneider and Carroll had two No. 1s in their first draft (2010), their own plus a No. 1 obtained from Denver in a 2009 trade. They selected LT Russell Okung from Oklahoma State at No. 6 and used the pick from the Broncos to acquire FS Earl Thomas of Texas at 14.

The beauty of the Thomas pick was not only in how well in turned out, but that Seattle  ceded only a second-round choice, 37th overall, in 2009 to get Denver’s No. 1 in 2010 – the equivalent of trading a fiver for a 10.

A year later, the Seahawks traded their first-round pick (12th overall) to Philadelphia for three lower choices. They took LB Bruce Irvin at 15th overall and used a sixth-round pick from the Eagles on CB Jeremy Lane.

Seattle hasn’t picked in the first round since. The Seahawks traded out of the first in 2013 and 2014 to acquire WR Percy Harvin from Minnesota (no comment necessary), and sent their 2015 first rounder, along with C Max Unger, to New Orleans for TE Jimmy Graham.

On their roster the day they nuked Denver 43-8 in Super Bowl XLVIII, the Seahawks had six first-round picks – Okung, Thomas, Carpenter, Irvin, Harvin and Marshawn Lynch (traded by Buffalo). That’s the fewest No. 1s on a Super Bowl winner in the free-agency era (since 1993). The 2015 Broncos had 10. In four Super Bowl victories since 2002, New England never featured fewer than eight.

Then the attrition began. Harvin left in a trade in 2014 and Carpenter via free agency the same year. Okung and Irvin exited the same way a few weeks ago. Fan favorite Lynch  retired with a wordless photo posted to his Twitter account in the fourth quarter of Super Bowl 50.

That leaves Thomas as the lone No. 1 on the roster, the only team in the NFL with so little from the top shelf.

Next fewest is Chicago, with four. By contrast, three teams have 10 or more, topped by Minnesota with 13.

These are the NFC and NFL teams with the most No. 1s, and the NFL clubs with the fewest (numbers reflect current totals in the free agency period):

The willingness – even eagerness — of Schneider and Carroll to trade top picks in order to acquire multiple ones in lower rounds hasn’t been confined to the first round. In the past two years, Schneider and Carroll made second-round moves that provided extra choices, resulting in Lockett last year and WR Paul Richardson the year before.

By trading out of the first, Schneider and Carroll proved they can add depth to the roster without sacrificing quality. There is valuable detail in their methods: The collective bargaining agreement mandates that all first-round picks receive four-year contracts. By avoiding the fourth-year liability, the Seahawks pick up salary-cap flexibility.

With additional picks, the Seahawks also provided themselves with more opportunities to “backfill” (Schneider’s word) positions, reducing the impact of losses in free agency. But the Seahawks have done better than backfill. They acquired SS Kam Chancellor in 2010 with a fifth-round pick acquired on draft day from Detroit, and Sherman a year later with a fifth-round pick, also from the Lions. Both became Pro Bowlers.

Lane followed a year later, and this year became the most significant of the unrestricted free agents retained by the club.

Based on Schneider’s remarks, there is every indication Seattle will not use its first-round pick at No. 26 Thursday, but instead will do what it has done in each of the past three drafts – trade down.

Asked during a recent interview on 950 AM KJR whether there are some years in which it’s more advantageous to trade back, Schneider said, “Yeah, absolutely. This is one of those, quite honestly. Now, whether or not you’re able to do it — you always have to find a partner — that can be somewhat difficult throughout the day and throughout the weekend.

“This is the best draft since we’ve been here in sheer numbers. Usually, we have about 130 or 140 guys on our board. This year we’re going to have about 200, which is a lot.”

Any of those top-rated picks may last until the second round, where Schneider and Carroll will hunt for a trade partner that covets the 26th pick.

In 2012, they plucked five future starters among their 10 picks, including Wilson at 75. But since 2013, they found only two full-time starters, Lockett and OG Justin Britt.

The Seahawks have nine picks. It will be no surprise if the Seahawks end up with more than that and conclude the draft as only team with a single No. 1 pick on its roster.