The Mariners escaped the embarrassment of blowing a 5-0 lead when Robinson Cano’s 10th-inning homer saved a 10-7 triumph that won the series in Cleveland. 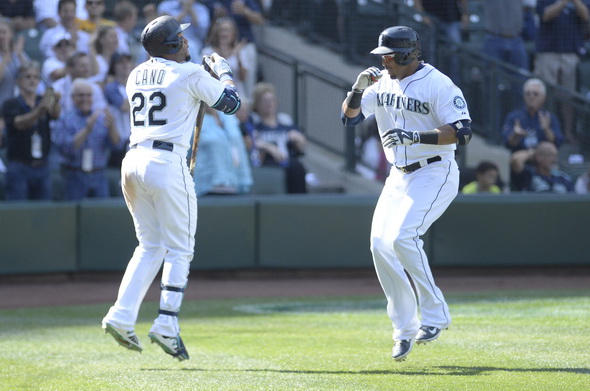 Robinson Cano made his Seattle teammates happy with a 400-foot homer in the 10th that won the game and series in Cleveland. / Alan Chitlik, Sportspress Northwest file

The Mariners squandered leads of 5-0 and 7-3 and were forced into extra innings Thursday before Robinson Cano broke a 7-7 tie with a three-run, 400-foot home run that gave Seattle a 10-7 victory over the Cleveland Indians at Progressive Field (box). Steve Cishek closed out the Tribe in the 10th as the Mariners (7-8) won their third consecutive road series.

The Mariners, who have scored four or more runs five times this year, pounded out a season-high 14 hits, including a two-run homer by backup catcher Steve Clevenger. But they gave up two homers, a three-run blow by Rajai Davis in the fifth, and a two-run, pinch-hit homer by Mike Napoli in the eighth that tied the game 7-7.

Cano finally settled a game of nearly four hours with his sixth home run. He didn’t hit his sixth last year until July 7.

Clevenger, whose two-run homer in the second was his first as a Mariner, opened the 10th with a walk. After Ketel Marte and Nori Aoki both lined out, Franklin Gutierrez walked. Cano deposited a fastball over the fence in dead center, breaking a career 0-for-7 against Cleveland reliever Cody Allen.

The Mariners went 4-for-13 with runners in scoring position, but wouldn’t have needed extra frames had they been able to capitalize early. They missed scoring chances in the second and third innings with runners poised to score. In the fifth, the Mariners had a chance for a huge inning, but Kyle Seager left the bases loaded . . . Clevenger’s homer was only the fourth of his 152-game major league career. He also had a single, the 10th-inning leadoff walk, and threw out a runner . . . Cano (3-for-5 with four RBIs) is three RBIs shy of 1,000 for his career . . . Nelson Cruz (2-for-5, 2 RBIs) and Adam Lind (2-for-5) also produced multi-hit games . . . Seager went 1-for-5 and is 3-for-22 on the road trip. He’s batting .145, the worst average among Seattle regulars.

Seattle starter Nathan Karns delivered a mixed bag. He pitched well through four innings when the Mariners staked him to a 5-0 lead. Then he yielded a three-run blast to Davis in the fifth and a single run in the sixth before he was lifted. Karns worked 5.1 innings and struck out five, but walked four . . . Nick Vincent, Tony Zych and Cishek all threw scoreless innings in relief, but Joaquin Benoit gave up a two-run homer to Napoli, the first pinch blast of Napoli’s career. Cishek collected his second save in as many days, requiring only 19 pitches to notch the pair.

“I was looking for something over the plate to put it in play. (Cody Allen) is a guy you’ve got to take advantage of when he puts it over the middle of the plate. This was special, not because I hit a home run, but because we won.” — Cano, after his game-winning home run

“That was a roller coaster. Sitting on a 5-0 lead, I thought we were going to have an easier run. But we responded. There were a lot of good performances today. Everybody swung the bat well. That was probably our best offensive performance, top to bottom, in terms of quality of at-bats. It was really a good day for Clevenger.” — Mariners manager Scott Servais

Marte returned to the starting lineup Thursday after sitting out Wednesday’s game due to a hitting slump. Marte went 1-for-5 and is batting .188 . . .  Seth Smith, who has been nursing a strained groin, started for the second game in a row in right field . . . The Mariners are 5-2 since their five-game losing streak . . . Seattle is 1-5 at home and 6-3 on the road . . . The Mariners are 2-1 in extra innings.

The Mariners open a three-game series in Anaheim Friday night against the Angels. Felix Hernandez (1-1, 1.00) will throw for Seattle opposite RHP Nick Tropeano (1-0, 0.84). Hernandez needs one strikeout to tie Randy Johnson’s club record of 2,162. After the conclusion of the nine-game road trip Sunday, the Mariners return to Safeco Field Monday for the first of three against the Houston Astros.