Panthers stunned the NFL when they rescinded the franchise tag on star CB Josh Norman over stalled contract talks. Seahawks know a little about unexpected turns over money. 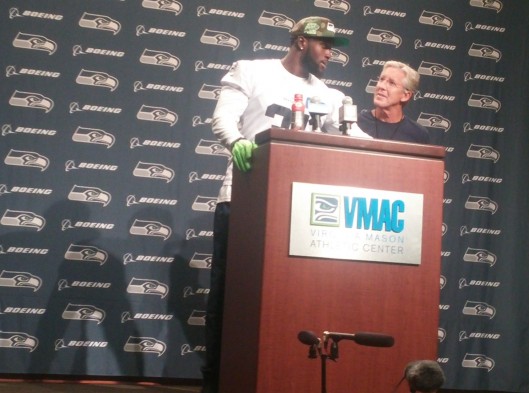 Just when a fan of an NFL championship-caliber team can relax — boom.

The surprising news this week that the game’s best cornerback, Josh Norman, was allowed to walk away from NFC champion Carolina, was another slap upside the head for fans naive enough to think that big success and big money should be enough to keep a star in the shop.

Panthers GM Dave Gettleman earlier in the off-season assigned pending free agent Norman the franchise tag, which would have paid Norman $14 million for the single season of 2016.

“When we decided to place the franchise tag on Josh, we were fine with him signing it and then working on a long-term deal,” Gettleman said at a press conference. “As we got deeper into conversations, we realized it was a significant difference between our thoughts and theirs.”

The Panthers’ long-term deal reportedly included an offer that was around $11 million in the first year, while Norman, 28, believed he was in line for Darrell Revis/Richard Sherman money at $15 million-plus.

Apparently Norman said, “Hell, no,” loud enough and long enough that Gettleman Wednesday made the unusual move of rescinding the tag, enabled because Norman had failed to sign it. The Panthers said goodbye to one of the anchors of a team that twice beat the Seahawks last season before falling to Denver in Super Bowl 50.

While Seahawks fans may be chortling at the serious blow to the top NFC foe, it was only last summer that the Seahawks were whacked by a similar blindside hit — the holdout of SS Kam Chancellor.

The stunning decision was one of the rare moments that caught Seahawks bosses Pete Carroll and John Schneider completely off-guard. They do a good job of coming up with Plan B when Plan A doesn’t work, the most recent example being when the offensive line that began last season was so over-matched that the coaches made changes at mid-season, turning the offense into one of the most efficient by season’s end.

But Chancellor’s decision was first known in July, late in the NFL calendar for major personnel changes. The fallback position was SS Dion Bailey, an undrafted free agent out of USC totally unprepared to start in the NFL.

In the Seahawks’ season-opening 34-31 overtime loss at St. Louis, the tying touchdown pass came over the head of Bailey, who fell down. He was out of the league as soon as Chancellor, without any evidence of an upgraded contract, returned for week 3.

The circumstances in Chancellor’s case were different than Norman’s, because Chancellor was under contract, which he wanted improved — one year into a four-year deal.

Per club policy — and the custom of every other team — the Seahawks don’t rework deals so early, for the entirely practical reason that it would open them to renegotiate with any player who may have outperformed his contract. It makes for chaos under the salary cap.

Norman was going to be a free agent until Carolina deployed the franchise tag, which Gettleman subsequently voided. Since the maneuver happened ahead of the draft, the Panthers have some hope of partial recovery.

Rescinding is a rare move — in fact, the last team to do it was the Seahawks in 2009, with LB Leroy Hill. He was signed a few days later by Seattle. But the much-higher-profile Norman is unlikely to return to Carolina, because it sounded as if Gettleman was far more attracted to a sudden $14 million in cap space.

“The more we thought about it, the more flexibility that $14 million would give us . . .  we just kept talking and talking,” he said. “I have a great belief that in order to get the right answer, you have to ask the right questions. We kept asking ourselves that question, and this is why we made the decision we made.”

Even with $14 million and the pending draft, the Panthers aren’t likely to come close to Norman’s equivalent for a secondary that was the weakest link in Carolina’s otherwise formidable defense, which shut out the Seahawks in the first half of the playoff matchup in January. The Panthers are in scramble mode.

So were the Seahawks in September. Coaches hate that, especially when it’s for non-injury reasons. Which may explain a bit about why the Seahawks reached into their past recently to re-sign two free agents from their Super Bowl-winning team: DE Chris Clemons, 34, and CB Brandon Browner, 32.

Carroll is big on playing and starting young players, figuring that after 16 regular-season games, nobody is a rookie anymore. But he makes some exceptions for crafty old guys who know the system and can handle emergency duties. The Dion Bailey experience may have informed him heavily.

Just in case DE Michael Bennett gets agitated again about his contract, as he did a year ago, or Chancellor decides for whatever reason to go over the falls again, Carroll doesn’t want to go as naked into a game as he did to start the season last year.

If fans thought it was cold for the Seahawks’ playoff game in Minnesota, well, Carroll knew worse last season in St. Louis in September.