Despite a pair of solid performances submitted by Dylan Remick in two starts, Joevin Jones remains the left-back apparent for the Sounders as they head to Colorado. 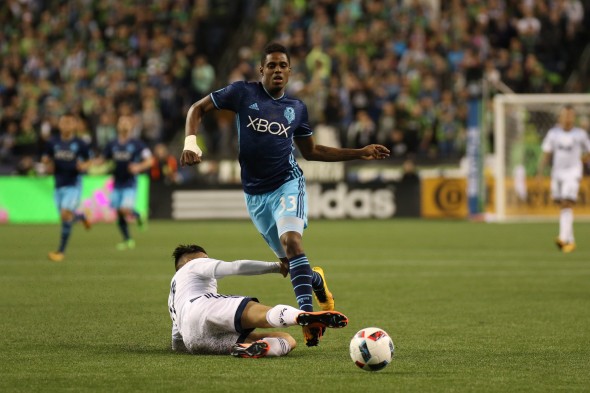 Joevin Jones started one of the last three matches, but is still the best option at left back. / Dan Poss, Seattle Sounders FC

After two recent starts for Seattle Sounders left back Dylan Remick, a position battle has bubbled up between him and Joevin Jones, the latter Seattle’s biggest off-season acquisition outside of native son Jordan Morris. Jones has fallen slightly out of favor, allowing Remick room to make his best case for starting minutes in his third full season with the first team.

The odds are stacked against Remick. Jones is the more complete player, and is by far the more offensively capable.

Sigi Schmid said Wednesday that he put Jones on the bench due to a missed flight returning from international duty with Trinidad & Tobago, holding him out of training days before Seattle’s (2-3-1) 1-0 win against Montreal April 2.

Jones returned to the starting 11 for a 1-1 road draw against Houston April 10, but was replaced again by Remick Saturday against the Philadelphia Union.

“Last week I just wanted to make a change,” Schmid said Wednesday. “I thought Dylan had played all right in the game here against Montreal, and we had won the game, so we decided to go that way.

Jones declined a request for an interview, but seems to be the presumptive starter for Saturday’s road match against the Colorado Rapids (4-2-1, 6 p.m., Q13 FOX). The spot, it seems, is still his to lose.

Jones was one of the lone bright spots on a Chicago Fire team that finished at the bottom of the combined table in 2015, and has been counted on by Seattle as a key piece of attacking movements through its first seven matches.

Remick, meanwhile, made 18 starts for the Sounders in 2015, but only as a replacement for injured starter Leo Gonzalez, and was even then supplanted by Oniel Fisher, himself disadvantaged to play left back due to his dominant right foot. Remick is a capable defender, but will likely lose his grasp on the starting spot to Jones.

The biggest reason that Jones will reclaim his position is offensive versatility. Especially in the new 4-3-3, the ability of the outside backs to get forward is paramount. While Remick can serve accurate crosses, he is unable to generate the same kind of threatening opportunities as Jones can.

Center back Brad Evans, who is also scheduled to be on the disfavored side of a position battle when Panamanian Román Torres returns to health following surgery to repair a torn ACL, offered his thoughts on the competition Thursday.

“I break up the team into different parts,” he said. “You look at veteran guys who are great for the group and have that leadership on the field, and then you have young guys who are very anxious to step on the field and make an imprint . . .When it’s younger guys, it’s more positionally specific. Those guys are really fighting to get on the field and smell something, and hopefully take control of it and fight amongst themselves.

“I think (Jones, Remick and Fisher) are all very capable players, they’re all hungry to play, when they step on the field it’s the bottom line to produce and to play well. When there is competition in those positions, that’s good for a team. Some guys will get frustrated at not playing, but at the end of the day I think we’re all man enough to say we want to see that the team does well, first and foremost.”

For Remick, he may now be on the outside looking in at the starting 11. But the pair of starts will no doubt keep him hungry, as well as keep Jones motivated.