Commish says NBA had “a great experience” in Seattle. Huh? Not for Sonics’ last years. But now? Sure. A bigger market without a team only helps the league’s extortion tactics. 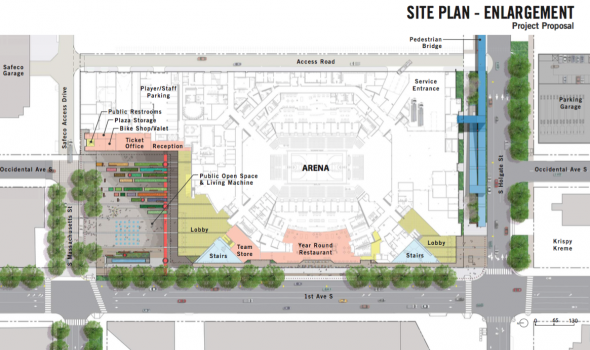 After saying for the umpteenth time that the NBA has no interest in expansion, Commissioner Adam Silver said something modestly interesting Thursday to the Seattle Times — interesting, if you’re willing to read between the lines and not be too emotionally invested in the return of the NBA to Seattle.

The Times sent reporter Geoff Baker to the Associated Press’s annual sports commissioners meeting in New York, where he questioned Silver about whether developer Chris Hansen’s increasing prospects for getting city council permissions to vacate a street to site his arena in Sodo will be enough to move the NBA’s needle toward expansion.

Predictably, Silver said expansion is not a priority, certainly not while collective bargaining is underway with the players’ union, whose deal with the league expires after the 2016-17 season. Until a new deal is struck, the league can’t know what its share of the revenue pie will be, nor whether it will be obtainable without a work stoppage.

So while the NBA will go through its traditional phony ritual with the union of claiming financial vulnerability, expansion can’t be on the table at that point. That is sensible.

The interesting part was how he spoke about not foreclosing on expansion eventually. Because as commissioner, he has an obligation to his bosses, the team owners, to fan the fires of a monopoly marketplace, in order to increase the fees for expansion, which help grow the equity value for each club.

“Organizations do tend to grow over time and I think that we’re no different,’’ he said. “There are some great communities out there that I know would be wonderful NBA homes. Seattle of course is one of those, and we’ve had a great experience there.”

Really? A great experience in Seattle? That is interesting.

At one time, that was true. But not after Howard Schultz bought the club in 2000.

Almost immediately, the baron of bean demanded public money to upgrade Key Arena, even though $100 million in public funds to do that were spent in 1995. Unwilling to pay much privately for the upgrades, a petulant Schultz in 2006 sold the team for a huge profit to out-of-towners hand-picked by then-Commissioner David Stern.

In 2007, anti-pro sports activists won a vote, by a 72 percent plurality, for an initiative in Seattle that required a small annual profit on a public facility leased by pro a sports team. The law remains unique in the American pro sports marketplace and an unparalleled outrage for the NBA, which saw it as a potentially viral threat.

By 2008, Stern gave his blessing to team owner Clay Bennett to sue his way out of town and relocate the team to Oklahoma City. In 2009, a locally produced documentary, Sonicsgate, a withering indictment of the NBA’s actions in Seattle, went national, was a critically acclaimed success and remains to this day a slam deeply resented among some NBA executives and owners because it dared to tell the truth.

So, the NBA had a great experience in Seattle?

The NBA is having a great experience now, because it has used the vacancy in Seattle to extort municipalities elsewhere to help fund new arenas.

Since the Sonics left, tax dollars in Sacramento and Milwaukee are paying at least half of the costs for new arenas to keep teams in town because local politicians were well aware of the eagerness by Hansen and scorned Sonics fans in Seattle to poach and relocate.

As has been written here several times, but somehow missed by some arena advocates, Seattle is to the NBA what Los Angeles was for 21 years to the NFL — a tool for extortion. Only until Rams owner Stan Kroenke unveiled a privately funded plan to create a $2 billion stadium/shrine/campus to pro football, did the NFL reluctantly agree to surrender its weapon and move back the Rams to the nation’s second-largest market.

While arena advocates and opponents in Seattle are wrapped around the incremental developments regarding a street vacation that would advance Hansen’s project, a non-involved reader of the timeline above could reasonably ask: Why bother?

The answer is simple: You never know.

Culminating a 33-year history of racial bigotry as a real estate developer and NBA owner,  Sterling in 2014 was banned for life, forced to sell the Clippers and fined $2.5 million by the league after his scorned mistress recorded and released racist remarks he made to her.

Whereupon Steve Ballmer, the Microsoft CEO and Hansen’s partner in the failed attempt to poach the Kings from Sacramento in 2013, bolted from the sloth-like Seattle arena process and bought the Clippers from Sterling’s wife for $2 billion cash.

While that story is familiar to many, take a step back and consider those two paragraphs and the degree of absurdity they contain. If you foresaw any of those developments, please tweet me your stock market views.

Can’t make up this stuff.

Another example: In the fall of 2008, shortly after the Sonics relocated to OKC, the economy tanked. The Great Recession hit the natural gas market so hard that Bennett’s moneybags partner in the poaching of the Sonics, Aubrey McClendon, was forced to sell a big chunk of his premium collection of wines just to stay afloat.

Speculation then was that if the city had had the guts in July 2008 to stay with a winning hand in the lawsuit to keep the Sonics, and the judge compelled the Bennett-owned club to stay in Seattle for the final two years of the KeyArena lease, the broke Okies reluctantly would have sold the club to Ballmer.

But unless Hansen advances his project to the acquisition of a master use permit (MUP) that authorizes construction, he will be in no position to take advantage of the unforeseeable.

It’s true that his chances of success even with a MUP seem small, but those chances are zero if he isn’t clear to break ground upon acquisition of a team.

Meantime, all it’s costing the city is the central staff’s time to investigate and modify a heavily privatized deal that could create a valuable addition to Seattle — but not before a team is assured of coming.

Since the signing of a memorandum of understanding among Hansen, the city and King County in 2012, Hansen has committed more than $100 million in capital improvements and public benefits to the project to satisfy environmental and safety laws, as well as  requests of the Seattle Design Commission and the Seattle Department of Transportation.

He’s even on the hook for an unspecified portion of cash for the Lander Street flyover, normally a city infrastructure expense that the Port of Seattle, Mariners and Seahawks have not seen fit to match for a road improvement project 13 years postponed.

The public ask from Hansen for his NBA team is $120 million in a bond loan, to be paid back out of annual operations. No new taxes, nor diversion of current taxes.

The deal has sufficient risk on the private side that, perversely, the commitments could be used by NBA owners privately as a reason not to support it: Bad precedent.

But for now, they’re already having “a great experience” with the Seattle situation just as it is.