After a year off following knee surgery, Huskies WR John Ross is back. He posted a 4.25-second 40 time in spring drills. The fastest time in NFL scouting combine history? 4.24. 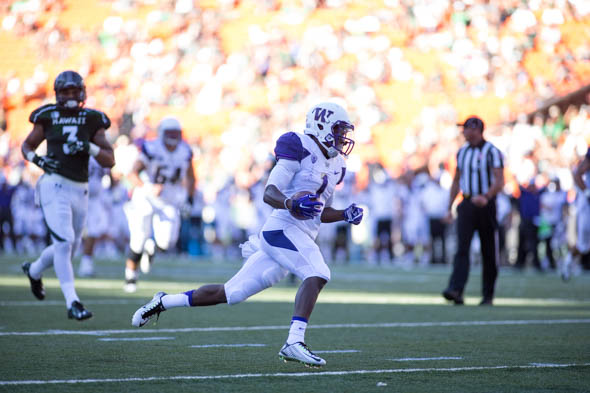 With a 4.25-second 40-yard dash this spring,  John Ross appears to be back. / Drew McKenzie, Sportspress Northwest

So’s you know, the fastest 40-yard dash time in the history of the NFL scouting combine was in 2008 when East Carolina RB Chris Johnson ran it in 4.24 seconds.

Huskies WR John Ross this spring ran it in a hand-timed 4.25. As a junior. After ACL surgery on his right knee. When I asked him how rewarding it was to reach such a milestone, he smiled.

“The milestone is four-flat,” he said. “That’s kinda impossible. But I always reach for the stars.”

Oh my. He may not get to the stars, but the far frontier of human physical endeavor is visible from where he stands.

University of Washington football fans knew something special was going on in 2014 when he scored seven touchdowns from distance. Precisely: 91, 20, 55, 75, 86, 100 and 96 yards. An average of 75 yards per touchdown play. Those are Roadrunner-cartoon plays, complete with the puff of dust and beep-beeps.

But in spring ball a year ago, Ross hurt his knee. He sat out the 2015 season, rehabbing. Now, the blur is back.

He caught a short touchdown pass in the Huskies “spring preview” scrimmage Saturday at Husky Stadium, the final of 15 practices that had the couple of thousand Huskies fans on hand intrigued by the 2016 prospects.

Especially with Ross joining sophomore QB Jake Browning and sophomore RB Myles Gaskin to create the kind of explosive power not seen in years from a Huskies offense.

The coaches held Gaskin out of even the pitty-pat tackles permitted Saturday, not wishing to risk a repeat of a year ago when Ross went down.

“We don’t need to win spring ball,” Huskies coach Chris Petersen said. “We need to get guys assignment-sound and technique-perfect. Then in fall camp, they’ll take the shots they need to take to make sure we have ball security.”

But after a year out of action, Ross needed the game-style exercise. He caught three balls for 39 yards, the longest just 16 yards. He needs work on technique and tactics to make him a greater threat than a returner who plays wideout.

“He’s still learning the nuances of the wide receiver position — he’d be the first to tell you that,” Petersen said. “If John dials into all these nuances, he’s going to be a really hard guy to cover.

“It’s nice to see him make catches in traffic. He shows a lot of courage over the middle. It’s one thing to run fast. It’s another to use technique to catch the ball and screen off defenders. He’s on the right track.”

As Petersen said, Ross knows he has to break the single-dimension stereotype.

“Break points, route-running, focus on catching the ball, understanding coverages – all of that kind of slowed me down as a freshman,” he said. “I thought being a fast guy would take me a long way. Sometimes it does, but I don’t want to be known as a fast guy. I wanted to get better.

“Sometimes I feel like I’m no better than the rest of the guys out here. I got to get in the weight room more, strengthen my  knees. Not to say I’m not healthy. It won’t hurt me to be 110 percent.”

If that 110 percent makes him any faster, he may have a superhero movie in his future. Of the soon-to-be legendary 40 clocking, Ross, 5-foot-11 and 196 pounds, said he wasn’t quite at full strength.

“I always run against time, and I trained really hard for that,” he said. “I didn’t feel 100 percent going into that day. But I took a deep breath, ran the time, and was pretty happy. To be honest, I felt I could have run faster.

“It was so early (in his return). I was still strengthening my knee.”

Now he has all summer to heal, to lift and to get busy pursuing the milestone. Browning may have to work on his fastball.