The Mariners had three home runs Sunday in a 9-4 win over the Angels. Seattle won its fourth consecutive road series, most to start a season since 2001. 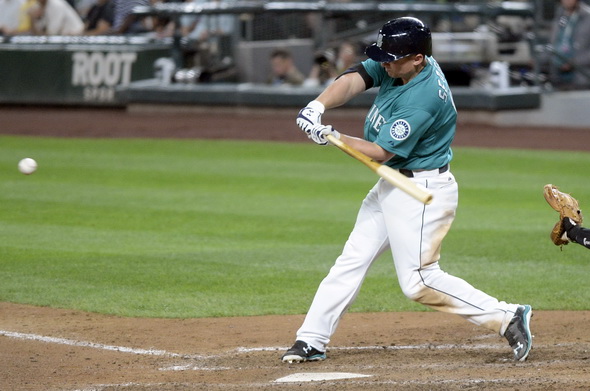 Wade Miley made only one major mistake in seven otherwise solid innings, Kyle Seager, Leonys Martin and Seth Smith homered, and the Mariners (9-9) cruised past the Los Angeles Angels 9-4 Sunday in Anaheim to win the series 2-1 and complete a nine-game road trip at 6-3 (box). Seattle won its fourth consecutive road series, the club’s longest streak to start a season since the 116-win Mariners took seven in a row in 2001.

Seager’s three-run homer in the first, which followed Nelson Cruz’s broken-bat RBI single, created a 4-0 lead. After the lead was cut to 4-3 on an Albert Pujols two-run homer and an RBI double by Geovany Soto in the bottom of the inning, Leonys Martin unloaded on Angels starter and loser Matt Shoemaker with  a two-run shot in the fourth. Martin broke an 0-for-10 skid.

At the top of the lineup, Nori Aoki and Smith collected two hits. Ketel Marte had two from the No. 9 hole . . . Seager’s homer was his third long ball of the year and “raised” his batting average to .134. He had two RBIs in his previous eight games. . . Seager and Smith are both one home run shy of 100 for their careers . . . Aoki’s stolen base in the ninth was his first of the season . . . The Mariners went 3-for-9 with runners in scoring position, but left only three on base . . . Robinson Cano went 0-for-5 and remains three RBIs shy of 1,000 for his career. He’s hitting .219 . . . The first-inning home run by Pujols, the 563rd of his career, ended an 0-for-26 slump.

Miley, who entered with a record of 0-2, 8.04, allowed four runs on six hits in 7.1 innings, collecting the win in his best outing. He struck out three and walked two among his 98 pitches. After allowing the Pujols homer, Miley allowed only one hit until Yunel Escobar homered in the eighth, ending Miley’s day . . . Nick Vincent recorded two quick outs after replacing Miley, then pitched a scoreless ninth. The Mariners own the majors’ lowest opponent batting average against their bullpen at .162 (31-for-191).

“They were jumping on the fastball early and (Albert) Pujols got one (for a homer), but that was an awesome job by Miley to hang in there and make adjustments. He started mixing up his pitches after the first inning. He’s a gamer, a professional, and he kept going after it. When Wade gets going, he can be very efficient. We played really good baseball on this trip. This is what we envisioned coming out of spring training.” — Scott Servais, Mariners manager