In John Stanton, the new lead owner, the Mariners, after 40 years ,finally have at the top a leader passionate about baseball and at the top of his business game. 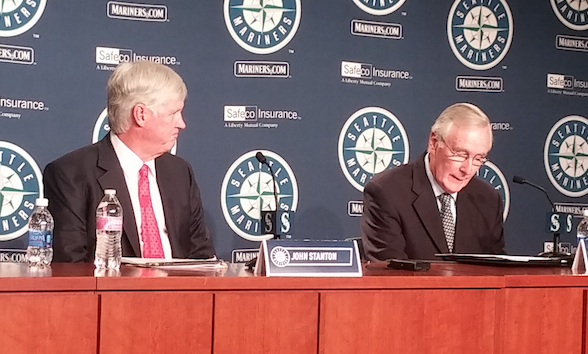 CEO Howard Lincoln reads from a statement saying that Nintendo of America was selling its shares of the Mariners to a group led by John Stanton. / Art Thiel, Sportspress Northwest

1972 — Awarding of a franchise to Seattle as part of settlement the state accepted after suing MLB over hijacking the Pilots and moving them to Milwaukee.

1992 — Offer from Japanese billionaire Hiroshi Yamauchi to buy the Mariners and keep them from moving to Tampa.

1995 — Approval from the state Legislature to contribute $380 million for a retractable-roof stadium to keep the Mariners from moving to Tampa again.

April 27, 2016 — Club minority ownership group led by Seattle billionaire John Stanton purchases 45 percent of the Mariners for $640 million from majority owner, Nintendo of America, on a valuation of $1.4 billion.

Now, take a look at that list and ask yourself: “What is missing?”

Always with the Mariners, it has seemed business came first.

Yes, I remember the 1995 season. And the 2001 season. The Mariners have had some terrific moments on the field. But there’s never been the transcendence of a World Series win, or even an appearance. Certainly nothing like sustained credibility as a serious franchise. You know, like the Seahawks under Allen-Carroll-Schneider.

After 40 years, that’s about to change.

The Mariners finally have it together.

They already have a sports-mad market in MLB’s largest geographic monopoly. They have the money, as the valuation showed. They have the stadium and the contemporary general manager.

When Stanton takes over in mid-August, after MLB approves the Seattle “transition,” they will have the owner to succeed.

Stanton will be the richest guy to own the Mariners. As well as the smartest and the most passionate about baseball. And fercripessakes, he’s the first local guy in the job.

Yes, I know Stan Kroenke was a Missouri native, which didn’t stop the owner of the St. Louis Rams two months ago from moving the NFL team to Los Angeles.

But Stanton is different. He is to baseball what wanna-be Sonics owner Chris Hansen is to basketball. And what another local guy come to wealth, Paul Allen, also is to basketball in Portland — and who did an OK job running the Seahawks for the past 19 seasons. 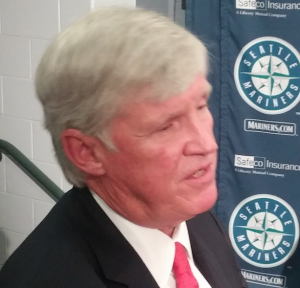 Stanton is not Danny Kaye, nor George Argyros nor Jeff Smulyan, previous Mariners owners in it for self-aggrandizement. Nor is he Lincoln, a Seattle longtimer now but who was a corporate attorney for most of his career, with no experience in sports or retail. His tone-deafness to public stewardship and operations of a pro sports franchise has been the burden of his tenure.

Seattle-born, raised in Bellevue, Whitman College (Walla Walla) honors graduate, Stanton said he wept as a boy when the Pilots left in 1970. And he gnashed his teeth when the Sonics left in 2008, even though he was a part-owner and made some nice coin in the sale hotly pursued by Seattle’s baron of bean, Howard Schultz.

For the record, Stanton as a member of the Sonics board of directors was among those to vote against the the sale to Oklahoman Clay Bennett. Answering a question about his Sonics tenure, he said his fellow Mariners owners “had it in the back of their minds” that Seattle was among the few American cities to have lost two pro sports teams.

They weren’t going to let it happen a third time. Lincoln said Wednesday there had been an outside query to Nintendo of America, the corporate owner of 55 percent of the club for whom Lincoln was the representative on the board, about possibly selling.

Tatsumi Kimishima, president of Nintendo, recalled a conversation he had some time ago with Hiroshi Yamauchi, the mysterious Japanese billionaire from Kyoto who in 1992 surprised Seattle and the baseball world with his offer to buy the club to keep it from moving to Tampa. NOA was the owner of record after Yamauchi, who died in 2013, signed over the club in 2004 for estate purposes.

“He said, ‘Don’t sell the team to a stranger who would use the team as a business,'” Kimishima told Japanese reporter Masa Niwa, who has been based in Seattle for years, in November. Niwa said Kimishima took it to mean that Yamauchi didn’t want the team sold to anyone who would profit from a sale to outsiders.

Enter Stanton. When Lincoln, 76, wrote a letter Feb. 3 informing the minority owners that he was “very anxious” to retire and that Kimishima agreed to sell NOA’s 55 percent, Stanton, 60, said he discussed with his fellow 17 shareholders owners the purchase based upon a value of $1.4 billion.

“I thought that the time had come,” Lincoln said. “As we discussed what Nintendo should do, we decided that now was the time to approach our other partners (to) see if they were interested in, and had the capacity to acquire, Nintendo’s majority interest in the team and in” the 70 percent ownership in Root Sports, the regional sports network.

They agreed. Stanton, who has owned about 10 percent of the club since he bought out original investor John McCaw in 2000, was the lead investor of the estimated $640 million offer, and will be the controlling officer. He said neither he nor anyone else will own a majority of the shares, but did not disclose percentages of ownership.

That’s a bold statement that Lincoln always seemed reluctant to make. But Stanton’s combination of keen intellect and easy self-disparagement has won him much respect, many friends and many business successes in the wireless technology industry.

From our friends at Geekwire:

Stanton is regarded as a wireless pioneer and his resume speaks for itself . . . He has led companies ranging from VoiceStream Wireless (the predecessor of the modern day T-Mobile) to Clearwire Corp. In addition, he worked as a top executive at McCaw Cellular and Western Wireless.

Stanton is also an active investor, having founded Trilogy Equity Partners in 2006. In the past two years, Stanton also joined the Microsoft board of directors, in addition to Costco’s board.

Outside the boardroom, the husband and father of two grown men has given back to his community in various ways. He holds leadership roles with the Business Partnership for Early Learning, the United Way of King County campaign, and Year Up of Puget Sound.

He called the lead ownership role with the Mariners “perhaps the supreme honor for me in my career.”

A man steeped in the baseball culture as a Little League coach as well as a father to a college baseball player and an owner of Northwest League teams in Walla Walla and Yakima, Stanton has the hardball bona fides, as well as the tech-business chops to navigate the changing intersection of sports and media.

If one were to build an ideal owner for a 21st century MLB team, it would look a lot like John Stanton.