The Sounders face the common MLS problem of back-ups not approaching the ability of the first team. In Seattle’s case, the disparity this season is striking. 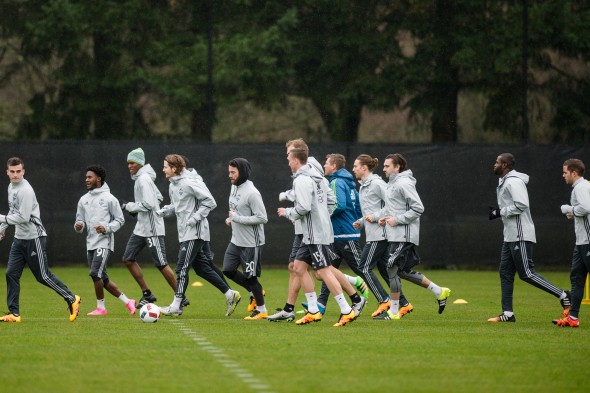 As the Sounders rebound from a loss in Colorado, concerns of depth pose season-long questions. / Jane Gershovich, Seattle Sounders FC

Coming off what Sigi Schmid termed the “worst game of the season,” a 3-1 loss on the road to the Colorado Rapids April 23, it is clear that the Seattle Sounders are struggling to address depth at every position. For the injury-prone Sounders, depth will be crucial to generating points without its marquee players.

Clint Dempsey and Nelson Valdez were sidelined with injury in the loss, with Valdez benched due to an issue with his hamstring, the muscle that is giving the Portland Timbers a run for their money as Seattle’s most impactful foe over the past season and a half.

At forward, rookie Jordan Morris has only recently started shoveling to help fill the chasm caused by the departure of Obafemi Martins to China weeks before the season began. Schmid admitted Thursday that it has taken time for players to adjust to the absence of the Sounders’ second all-time leading scorer, but that he felt the forward group was making progress.

While Morris has started scoring, depth is a concern. Oalex Anderson, while full of potential and seemingly never out of gas, is still unproven as a starter. Herculez Gomez, while full of experience, is 34 and has difficulty getting through 90 minutes. Both are serviceable replacements for Valdez or Dempsey when one is injured, but when Anderson and Gomez are called upon for a full match, the attack is blunted.

Behind Anderson and Gomez, things don’t improve. Darwin Jones has good pace, but has struggled to find his game at the highest level in nine professional appearances. Victor Mansaray has never appeared with the senior team, and Andy Craven is still on the contract that the Sounders desperately had him sign when they ran out of forwards last summer.

While Dempsey and Valdez are expected to start at home against the Columbus Crew Saturday (1 p.m., JOEtv), a dual absence likely will arise again at some point, during which production will be needed from replacements to avoid 2015’s summer slippage.

A disparity of talent between starters and depth players has always been the case in MLS, but that gap is closing around the league. The Sounders are trying to figure out how to bring the lower level players in line with the talent that they splashed major cash on during their first few years in MLS.

The midfield is depleted, especially following the off-season departures of Marco Pappa and Seattle’s third all-time scorer Lamar Neagle to the Rapids and D.C. United, respectively.

Erik Friberg has recently recovered from an MCL sprain and started against the Rapids, but back-ups Nathan Sturgis and Michael Farfan still haven’t seen the pitch seven matches in.

Seattle may be looking to sign a big-contract midfielder to fill Martins’ vacated Designated Player slot, but so far only speculation surrounds the idea as the opening of the summer transfer window approaches in early July.

Defensively, Seattle has great depth at outside back, as evidenced by the recent position battle between Dylan Remick and Joevin Jones, as well as the sturdy play of Tyrone Mears and the resume-building work of Oniel Fisher last season.

The center backs, however, are a different story.

As Román Torres still recovers from his ACL tear, Brad Evans has put the Sounders into an awkward position following his ejection from the match against Colorado in the 87th minute for verbally abusing the referee.

As Zach Scott, 35, prepares to line up for his third start of the season alongside Chad Marshall, 31, the Sounders will likely have to call rookie Tony Alfaro into the 18-man roster to provide the option for a back-up center back. Alfaro is the only center back on the team under 30. Schmid said at the time of his signing that Alfaro was not yet ready.

Schmid said after the loss to the Rapids that he wanted to end the discussion regarding ages.

“I’m tired of hearing about old players and young players,” Schmid said. “They’re either good players or bad players. Let’s forget about everything else.”

Seattle’s best-case scenario starting 11 is one of the best lineups in the league, regardless of age. Best case, however, has not been the reality for the Sounders for several years. As players drop out, age will play a role in making some legs heavier than others, despite what Schmid says.

As the status of several bench players swings from “mediocre” to “unproven” to “good,” the Sounders may be due in for another set of reminders that a team is only as good as the sum of its parts.