Seahawks traded up to get top Alabama nose tackle, then devoted three third-round picks to a Notre Dame running back, an Ohio State tight end and a guard from Boise State. 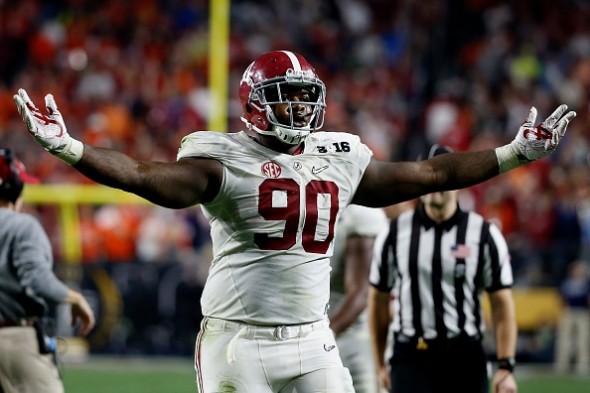 The Seahawks selected Alabama DT Jarran Reed in the second round of the NFL draft. / hngn.com

After trading down (from 26th  to 31st) in the first round Thursday and selecting Texas A&M OT Germain Ifedi, the Seahawks Friday traded their second-round pick (No. 56) as well as No. 124 in the fourth round to the Chicago Bears to move up seven spots in the second round to select Alabama DL Jarran Reed.

After selecting Reed, the Seahawks turned their focus to offense. They had three selections over eight picks late in the third round: Notre Dame RB C.J. Prosise was their first pick in the third (90th overall), Ohio State TE Nick Vannett was second (94th), and OG Rees Odhiambo of Boise State with the final (97th).

With four picks remaining Saturday, the defensive-minded Seahawks have taken offensive players with four of their first five choices.

That move up to select Reed marked only the third time in the John Schneider/Pete Carroll era in Seattle that the Seahawks traded up in a draft. They traded down in each of the past three drafts without moving up.

Barring further trades, the Seahawks will have four picks in rounds 4-7 Saturday, including the 171st pick in the fifth (compensatory choice), the 215th pick (compensatory) in the sixth and picks 225 (from Dallas for RB Christine Michael) and 247 (own) in the seventh.

The Seahawks’ picks Friday in rounds 2-3:

Round 2, pick 49: The 6-foot-2, 307-pound Reed, who transferred to Alabama from East Mississippi Community College in 2013, recorded 56 tackles (4.5 for loss) and one sack for the Crimson Tide last season. According to an NFL.com draft analysis, Reed made second-team All-SEC “because of his utterly disruptive play whether playing between the guards or heads-up on a tackle in the Tides’ feared front line.”

Reed was arrested for DUI in the summer of 2014 in Tuscaloosa. The charge said he registered a 0.13 blood alcohol level. He was suspended for fall practice by coach Nick Saban but missed no games.

His main weakness, according to NFL.com, is that he is an ineffective pass rusher. However, Reed is “an elite run defender with the lower body strength to command his gap. Teams looking for a battle-­tested run-­stuffer will find an instant upgrade who should be able to come in and start immediately, if needed.”

Reed attended Goldsboro High School in Goldsboro, NC. After high school he attended Hargrave Military Academy in Virginia for a year after his grades kept him from attending the University of Florida.

During his first year at Alabama, he played in all 14 games and made 13 starts. He recorded 55 tackles and one sack. Reed considered entering the 2015 draft but returned to Alabama for his senior year.

Reed will compete for the defensive line slot vacated by Brandon Mebane, who left for the San Diego Chargers in free agency.

Pro Football Focus analysis: “With our second-best grade against the run in 2015, Reed is rarely moved at the point of attack and he knows how to shed and make plays, as indicated by his nation-leading run-stop percentage of 13.4 percent. He can play nose tackle, but also looks the part of a 3-4 defensive end if needed.”

Prosise has played one season as a full-time running back, but according to NFL.com, he is an “ascending running back prospect with the physical build to handle a workload, the athleticism to create for himself, and the hands to keep stacking total yardage up. While Prosise has the acceleration and play strength to fit into an NFL offense, he needs to become a shade more decisive and has to improve in protections if he is to become a three-­down option.”

Prosise is third running back on Seattle’s roster, joining Thomas Rawls (recovering from a broken ankle) and Christine Michael.

Round 3, pick 94: The 6-6, 257-pound Vannett (the 10th Ohio State player selected in the first three rounds of the draft, an NFL record) is considered more of a blocker than a receiver. The Seahawks selected him by virtue of receiving a pick from the Denver Broncos in exchange for moving down in the first round from 26th to 31st.

The Seahawks have some serious depthat tight end with Jimmy Graham, Luke Willson, Cooper Helfet and Vannett, who caught 19 passes for 162 yards last season in his first year as a starter for the Buckeyes.

Vannett is a native of Westerville (OH.) and signed with Ohio State after considering Michigan.

NFL.com analysis: “Vannett showed he can be an every-down, viable tight end where you can virtually line him up anywhere to help out an offense. He certainly is more than solid in the run game and helping to open up some holes. When given opportunities, Vannett caught the ball well.”

Round 3, pick 97: A native of Kenya, Odhiambo earned all-conference honors the past two seasons, but hasn’t started more than nine games in any year due to injuries. Still, according to NFL.com, “whether he serves as an undersized tackle or proves strong enough to move inside (as former Boise State LT Daryn Colledge), Odhiambo has starter-quality skills.”

The consensus of NFL scouts is that Odhiambo, recruited to Boise by Chris Petersen, now coaching Washington, is a well-built college tackle who is projected to play guard. He is considered coachable and a team-oriented player who has the temperament, frame and strength needed to play inside.

He played left tackle for the Broncos last season before a season-ending broken ankle. He is 6-4 and 315 pounds and made All-Mountain West first team last year despite the injury. He was on both the Lombardi and Outland Trophy watch lists.

NFL.com analysis: “Tom Cable is going to love this guy. There are two issues with him. One, durability. Two, where to play him. But Cable will love him because he’s athletic, and he can turn these type of guys into good football players.”

Players with local connections selected in the second and third rounds Friday:

Round 2, pick 36, Jacksonville: A graduate of Bellevue High School and rated one of the top five athletes in the draft, Jack, a star recruit of UCLA coach Jim Mora, the ex-Seahawks coach, fell to the second round. Clubs were reportedly worried he will have to undergo microfracture knee surgery sometime in his career. Former Seahawks defensive coordinator Gus Bradley, coach of the Jaguars, traded up in the second round to snatch Jack, who, playing both ways, scored four touchdowns in UCLA’s 41-31 win over Washington in 2013.

Round 3, pick 74, Kansas City: Russell was an All-State player at Everett’s Mariner High School before matriculating to Notre Dame. He started 11 games for the Irish last year after losing the entire 2014 season due to academic dishonesty. In 2011, his final year at Mariner, Russell rushed for 1,293 yards and 14 TDs.