“The best run-stuffer in the draft,” says GM John Schneider of Jarran Reed, the second-round pick. And since he comes from Nick Saban’s factory, he should be plug and play. 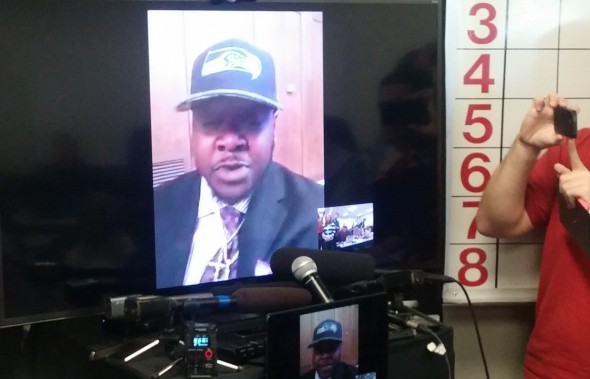 The best thing about NFL teams drafting University of Alabama football players is it’s like getting another pro team’s players for free. The Crimson Tide is the 33rd franchise. Coach Nick Saban is Bill Belichick. The players are well-trained, well-paid and may consider the NFL a step down. The Southeastern Conference has its own seat at the United Nations.

“I feel like I prepared against very talented people at Alabama, and in the SEC, period,” DT Jarran Reed, the Seahawks’ second-round draft choice, said Friday via teleconference. “Definitely the offensive line: We had a great center, and tackles as well. Everybody was good.”

Reed’s transition to the Seahawks’ interior defensive front figures to linger only as long as it takes him to say on the field, “No school here, right? Imma stand here and tie up three guys. Rest of y’all jus’ go.”

Reed was on just about everyone’s mock-draft list as a first-rounder — “the best run-stopper in the draft,” general manager John Schneider said — but as the 6-foot-3, 311-pounder drifted down in the second round, Schneider started quivering.

He had the 56th pick, and couldn’t stand it any more. So he offered the pick and a fourth-rounder to the Chicago Bears to move up to 49, where the Seahawks grabbed Reed to be the next Brandon Mebane.

Unlike first-round pick RT Germain Ifedi, and probably every other Seahawks draftee, Reed will not need a long runway. The program run by Saban operates with the precision and intense routine of a nuclear submarine. Feel free to hate on the Crimson Tide colossus, but there’s no denying its high-level efficiency in producing pro players.

Let James Nagy explain it. He’s the Seahawks Southeast area scout who bird-dogged Reed and helped sell the virtues of the Goldsboro, NC., giant to Schneider. Nagy lives in Alabama, so he can’t help but be irradiated by The Entity.

“As good as any (football) school the country, that’s for sure,” he said Friday. “Nick’s background is in the NFL, so you can feel it when you walk in the building. Just the discipline, and the structure and the support staff.

“They have twice as many people in the building around these kids as probably any other school. They’re very well-prepared. You never have to worry about guys out of Alabama being prepared.”

The program puts the lie to every bit of the word amateur, but that is not the concern of NFL teams, which revel in a free farm system that produces with the precision of diamond cutters.

“It’s a great program,” coach Pete Carroll said. “Saban does a fantastic job. He’s shown extraordinary consistency in developing great teams. So to get guys that have been coached in his style, I think only helps us. He’s very demanding and very tough on these guys, so we get the benefit of that. These guys are ready to go.

“They’re raised well. They’re very team-oriented — good, solid kids to add to your program. These guys are going to bring something to every club that they go to.”

Reed suggested the Tuscaloosa tabernacle is not for the dilettante crowd.

“Our preparation, it’s tough,” he said. “It’s hard, it’s physical, it’s mental. Real business-like, so it really prepares us for the next level.

“When we get to come (to the pros) here we’re equipped and we’re kind of up to beat, and know how things go.”

The factory efficiency is not to suggest that all ‘Bama boys are also Boy Scouts. Reed managed in June 2014 to get himself busted for DUI in a Tuscaloosa parking lot, where his vehicle backed into a parked car. He blew a blood alcohol reading of 0.13. He was suspended for fall practice, but Saban didn’t think the indiscretion was worthy of missing a game.

The Seahawks didn’t think it was worthy of bypassing a premium talent.

“(The Alabama staff) is really OK with his character,” Nagy said. “They think he’s a great kid. It was just a mistake. He was young.”

If he were a screw-off, Reed probably wouldn’t hold the position of eminence that he had in the Tide locker room.

“He’s the alpha dog of that program,” Nagy said. “Across the board, everyone said this guy was the leader of that program. He was the guy on game days that got them juiced and got them going.

“You guys will see it when he comes up here. He’ll bring that to this team for sure.”

Another alpha dog in the Seahawks locker room. The sled figures to keep moving.

Three giant programs dominated the first three rounds of the draft. In fact, Ohio State set a three-round record with 10 players taken, two more than the record of eight by Tennessee in 2004. Alabama had seven and Notre Dame six.

The Seahawks took one from each school: TE Nick Vannett from the Buckeyes, Reed from the Tide and RB C.J. Prosise from Notre Dame.