The Mariners’ only hit was the game-winner as Felix Hernandez and two relievers shut down the world champion Royals. But it took a great catch of the last out to preserve the win. 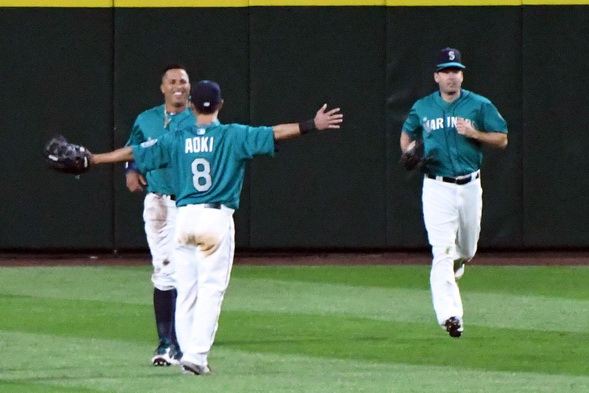 Felix Hernandez threw 7.2 innings of five-hit ball and CF Leonys Martin made a game-saving catch against the fence for the final out to lead the Mariners to their first shutout win of the season, 1-0 over the struggling Kansas City Royals (box). It was Seattle’sseventh win in nine games and kept the Mariners on pace with AL West-leading Texas.

On a night that was looking familiar, with Hernandez cruising and the Mariners failing to provide offense, RF Seth Smith came through with Seattle’s lone hit of the night when he led off the sixth with a homer. It was barely over the out-stretched mitt of right fielder Jarrod Dyson, but the hit was all Hernandez and the Mariners needed.

Hernandez did his part to entertain the King’s Court: five hits, four strikeouts and three walks. He got himself into trouble early, stranding runners on third base in both the second and third, and needed a double play to get out of a jam in the fourth.

Nick Vincent came on to finish off the eighth, then closer Steve Cishek earned his sixth save of the season with a shaky ninth that included a single and a game-ending catch by Martin against the wall in deep center. Martin made a running catch on the warning track before slamming into the center field wall face-first to preserve the win.

Facing starter Kris Medlen for the first time in his career, the Mariners had no success until Smith’s homer. The single hit was it, a common theme over th eyears when Hernandez is on the mound.

“That wall is really hard. I hit my face and chest. But I made the play, so it doesn’t
matter.” – Martin on his game-winning catch for final out

Saturday night’s game starta at 7:10 p.m. The original schedule had a6 :10 start time, but earlier this month the Mariners moved it up an hour . . .Hernandez’s season ERA dropped to 1.38 after Friday night’s performance . . . Seduced by the appeal of beard-hat night, a crowd of 38,684 fans showed up at Safeco Field —  the largest home crowd since the home opener.

There probably won’t be quite the pre-game excitement from the stands in left field in this post-King’s Court matchup. LHP Wade Miley (1-2, 7.04 ERA) will take the mound for Seattle, while Kansas City will counter with RHP Yordano Ventura (2-0, 2.35 ERA).