The Seahawks continued their run on offensive players, selecting Arkansas RB Alex Collins. With a second pick in the fifth round, they moved up to acquire DT Quinton Jefferson of Maryland. 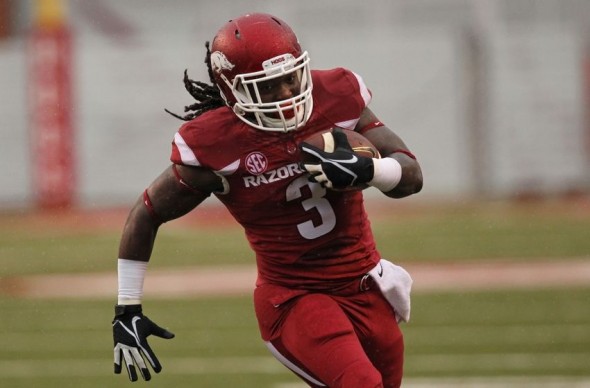 The Seahawks selected RB Alex Collins in the fifth round Saturday. / University of Arkansas

Somewhere, as he revels in retirement, Marshawn Lynch must be chuckling and chomping on Skittles. During the three-day NFL draft that ended Saturday, the Seahawks, in an obvious response to Lynch’s sudden and creative departure in February, spent three of their 10 picks on running backs — even though they already had on their roster Thomas Rawls and Christine Michael.

Although general manager John Schneider and head coach Pete Carroll have maintained that Rawls, who broke an ankle last season, is rehabbing nicely and should be ready by training camp, the Seahawks clearly were not entirely convinced they had the RB position covered with Lynch out of the picture.

So they selected Notre Dame’s C.J. Prosise in the third round, Arkansas’s Alex Collins in the fifth, and Clemson’s Zac Brooks in the seventh. This is the first time in the Schneider/Carroll era that Seattle has taken three running backs in a single draft (it took two in 2013). The last time Seattle drafted three was 1987, when it had 13 picks and running backs were a much higher priority than they are today.

The Seahawks used eight of their 10 picks on offensive players, including the three running backs, three offensive linemen (by popular demand), two defensive linemen, a tight end and a wide receiver.

The Seahawks picked up one of those defensive linemen, Quinton Jefferson of Maryland, by trading up in fifth round to take him at No. 147. The Seahawks engineered his selection by trading a 2017 fourth-round pick and their choice in this year’s seventh round (No. 225) to the New England Patriots for pick No. 243 in the seventh round (wide receiver Kenny Lawler of Cal).

The Seahawks traded up twice (also in the first round) after trading up only three other times in the Schneider/Carroll era (since 2010). Seattle made five picks Saturday, including two of the three running backs:

Round 5, pick 147: A married father of three, Jefferson was a highly regarded recruit coming out of his native Pennsylvania, but suffered a series of setbacks early in his college career, including a jaw broken during a fight. His career was further waylaid by a torn ACL s during a 2014 game against West Virginia.

“It’s great to know that (the Seahawks) really wanted me,” Jefferson said. “I can’t wait to come to the organization, be in front of the 12s and compete. That’s the main thing. I’m so excited.

“I think I bring a lot of versatility because I played defensive end and tackle. I think I’m very disruptive inside with the run game and the pass. I feel like I can really get after it on third downs. That’s a premiumon that in this league right now.”

NFL.com analysis: “High cut 3-­technique with good upper body strength but below average lower body power to take a stand. Jefferson flashes penetration ability and some pass rushing talent, but he needs to be fitted to a 1­-gap, upfield defense and will have to make a team as a rotational lineman.”

Round 5, pick 171: Collins didn’t entirely re-write the Arkansas record book, but he came close. He ran for 3,073 yards and 38 touchdowns during his career, totals that ranked second and fourth, respectively, in school history.

He also posted 17 games with 100-plus rushing yards, also second in Razorbacks annals. Three of those 100-yard efforts came in his first three games, making him the first NCAA back to accomplish that feat since Adrian Peterson in 2004.

Last year, the 5-10, 217-pound Collins ran for 1,577 yards and 20 touchdowns. He was a second-team All-SEC choice. He finished his career as the SEC’s active leader in career rushing yards.

Collins is the second running back taken by the Seahawks, following C.J. Prosise of Notre Dame, selected with the 90th pick in the third round. Collins becomes the fourth running back on Seattle’s roster, joining Thomas Rawls, ChristineMichael and Prosise.

Seattle has now used five of its first six picks on offensive players.

“This is definitely exciting for me,” said Collins. “I’m pumped and ready to get out there. I’d describe myself as a hungry back, a complete back that comess in and pass protect and get short yardage. I can go out of the backfield and catch and I can pretty much do everything I’m asked.”

According to NFL.com, Collins is “well-built, has a durable frame with feet from a wind­up toy. Plays with amazingly consistent and repetitive tempo as a runner. Able to weave in, out and around traffic without breaking his speed or tempo. Has foot quickness and agility to avoid the backfield traffic and the instant acceleration to get the run underway. Patient and probing while waiting for a crease. Pad level and knee bend are outstanding.”

NFL.com analysis: “Collins is the epitome of consistency,. rushing for more than  1,000 yards and at least 5.4 yards per carry in each of his three seasons. Vision and footwork are the catalysts for his elusiveness and he has flashed long speed. Collins is a repetitive runner lacking dynamic talent, but he’s run in gap, power and zone schemes and should be a scheme fit for most teams looking at running back. Collins should be able to step right in and challenge for carries and red zone work immediately.”

Round 6, pick 215: The 6-1, 295-pound Hunt made first-team All-Big 12 last season even though he did not start the final three games of his senior year due to injury. Hunt is the third offensive lineman selected by the Seahawks in 2016, following OT Germain Ifedi of Texas A&M in the first round and OG Rees Odhiambo of Boise State in the third.

Hunt is considered undersized and apparently doesn’t have much room in which to add bulk. But he has been described as an “instinctive, functional center who plays with a lot of intelligence.”

“I’m a hard-working guy,” said Hunt after the Seahawks selected him. “I want to be competitive, a guy who really studies the game and tries to contribute to my team as much as possible. Getting drafted by Seattle is surreal, just an amazing feeling.”

NFL.com analysis: “Technically sound, three-year starter who plays with confidence and consistency. Hunt lacks the size and length that teams look for from draftable centers, but his football IQ, consistency and functional strength give him a shot.”

Round 7, pick 243: Playing with No. 1 overall pick Jared Goff (L.A. Rams) at Cal last year, Lawler voted a first-team All-Pac-12 pick with 52 catches, 658 yards, and 13 touchdowns (ranking in the top 10 nationally). He finished his Cal career with three touchdowns against Air Force in the Armed Forces Bowl.

The Seahawks drafted Lawler after a trade with New England that resulted in the 243rd pick.

Lawler scored once every 5.3 touches for Cal. His speed enabled him to get open early. He’s 6-2 and 203 pounds and has what has been described as a “string-bean body type.” He went later than NFL.com projected, which had him going in the third to fourth round.

Lawler finished his collegiate career tied for second on Cal’s all-time list for touchdown receptions and tied for 12th in the Pac-12 with 27 scoring grabs among 143 catches for 1,706 yards receiving over 35 games and 19 starts.

He had at least one catch in 34 of his 35 career games (19 starts) from 2013-15 with the lone exception coming as a 2015 junior at Stanford in a contest in which he saw action on only a single play due to injury.

Lawler said Saturday that he was fielding phone calls from teams interested in signing him as a free agent when the Seahawks got in touch with him.

“When I got the call from Seattle, Mr. Schneider said he was going to pick me,” he said. “Man, my heart just dropped and tears came down my eyes and it was an unbelievable experience right then and there.”

NFL.com analysis: “Tall but thin possession receiver who produced impressive touchdown totals in Cal’s “Bear Raid” offense. While Lawler’s footwork gets him in and out of his breaks quickly, he will find that NFL cornerbacks will try and suffocate him underneath without fear of deep ball retribution. Lawler’s short-area quickness and ability to snare the difficult catch could be an intriguing pairing from the slot where he could find the size matchups more to his liking.”

Brooks was in line to be the Tigers’ starting running back in 2014 until he had a season-ending foot injury in fall camp last August. That ultimately led to redshirt freshman Wayne Gallman emerging as Clemson’s feature back, and left Brooks to be Gallman’s backup.

During his pro day, Brooks spent time meeting with representatives from the Indianapolis Colts, Houston Texans and Seahawks, who were sufficiently impressed that they used their final pick Saturday on him.

“I felt like if I was going to be drafted, it would be by the Seahawks,” Brooks said. “The coaches showed interest in me. I had a great time on my visit there. I felt like I had a great relationship with some of the staff there, also.”

The following players with local connections were selected Saturday in rounds 4-7 of the NFL draft.

Round 5, pick 151, Detroit: A 6-foot-4, 304-pound left tackle under head coach Mike Leach, Dahl was named first-team All-Pac-12 and second-team USA Today All-America last season. Dahl began his college career at the University of Montana and sat out a year before transferring to Washington State. Dahl will have to move inside at the pro level, and, according to NFL.com, “needs to hit the weight room to add even more mass to his frame. Dahl projects as an eventual starting guard.”

Round 6, pick 220, Pittsburgh: Feeney played four years at Washington and had, by far, his best year as a senior when he replaced NFL draftee Hau’oil Kikaha at the buck position and earned second-team All-Pac-12 honors with 17.5 tackles for loss and eight sacks. According to NFL.com, Feeney “has worked hard to transform his body from safety to linebacker, but is still lacking the frame and strength to consistently hold his ground at the point of attack. Feeney’s competitiveness and ability to play in space could help him transition into a more natural role of 4-­3 Will linebacker and his coverage talent on special teams gives him a shot to break camp on the 53.”

Round 7, pick 236, Detroit: Washington rushed for 282 yards on 47 carries (6.0 ypg) in 2015, with four touchdowns. He possesses size and speed (6-2, 226) and is a long strider, but “lacks creativity, ball security and power,” according to NFL.com. He lost his starting job last season and missed Washington’s final three games due to injury. Considered a long shot to make the final 53.