After a slow start that had some questioning his readiness, Seattle Sounders rookie Jordan Morris has scored in each of Seattle’s past three contests. 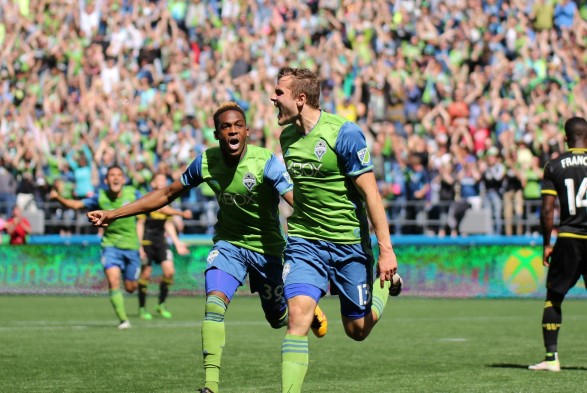 Saturday’s match against Columbus was replete with edge-of-the-seat moments, but Jordan Morris waited until the 88th minute to cash in his third goal in as many games in a 1-0 triumph for a Sounders team that is almost over the hump from a slow start to the season.

The goal came with the help of two substitutes. Erik Friberg, who replaced Aaron Kovar in the 65th minute, slid the ball into an opening left of the net. Oalex Anderson, who had replaced Herculez Gomez one minute prior, let the ball go since he had started the play in an offside position.

Left back Joevin Jones connected with the ball at the end line, lining up Anderson inside the six-yard box. Anderson’s shot was blocked by Crew keeper Steve Clark, but the rebound fell straight to Morris, who smashed it into the net.

“I thought we were justly rewarded with the goal,” coach Sigi Schmid said. “Three points is massive. We wanted to get wins at home. I think it was a good game from the standpoint of our character to stay with the game.”

Gomez joked after the game that Morris was capitalizing on advice that he had once received from former Glasgow Rangers forward Billy McNicol.

“I gave Jordan (McNicol’s) advice, and he’s taken to it well,” Valdez said. “I told Jordan in any game if you don’t know what to do, just put it in the back of the net. Just put yourself in front of the goal. Don’t think — react.”

The concept is a John Madden-level of accessible, but the play of Morris since he snagged his first goal, also a game-winner, against Philadelphia April 16 has held up to McNicol’s simple solution. The 21-year-old’s game has lost the anxious, hurried quality that it had in his first starts.

Seattle (3-4-1) echoed Morris’s turnaround after a 3-1 thrashing by the Colorado Rapids April 23. In particular, the aggressive play that Schmid said was absent against the Rapids returned. The Sounders swung in 30 crosses, leading to eight shots on target.

The play up top was a joint effort between Morris, Kovar, Gomez and Clint Dempsey, who rotated to various positions in the formation as the match progressed. The game provided evidence that players are developing a stronger understanding of how to play off of one another to create breakaways.

Defensively, Seattle had its hands full with an attacking trio of Ethan Finlay, Justin Meram, and 2015 MLS MVP finalist Kei Kamara. Columbus (2-4-2) put the Sounders on their heels for the first ten minutes, running its offense through Argentine central midfielder Frederico Higuaín. Seattle managed to hold on against the Crew, but not without several nervy moments.

Frei made two crucial saves against Higuaín to keep his second clean sheet of the season. The first was a sprawling kick save in the ninth minute after a ball curled unexpectedly in traffic. In the 32nd, Frei nearly gifted the visitors a goal, hitting a failed clearance directly to Higuaín while out of the net.

Higuaín was as surprised as any of the 39,473 in the stands, but made a move towards the open goal. Center back Zach Scott, starting in place of the suspended Brad Evans, forced the midfielder to make one more touch and strike a rushed effort straight to a recovering Frei.

The Sounders bore down in the second half, generating a string of close shaves in the build-up to the goal. Osvaldo Alonso played a key role for the Sounders, holding down space to frustrate Columbus’s attack and creating opportunities in transition by carrying the ball through the center of the field. Fellow defensive midfielder Cristian Roldan generated less offense than Alonso, but turned in a strong defensive performance.

Seattle has taken 10 points from its last four matches, which will be encouraging to fans anxiously glancing at the Western Conference standings. The real relief for the Sounders is the turnaround in play, which suggests that the whole team has taken Gomez’s borrowed advice to heart.