Miley dominates for all nine in Mariners’ win 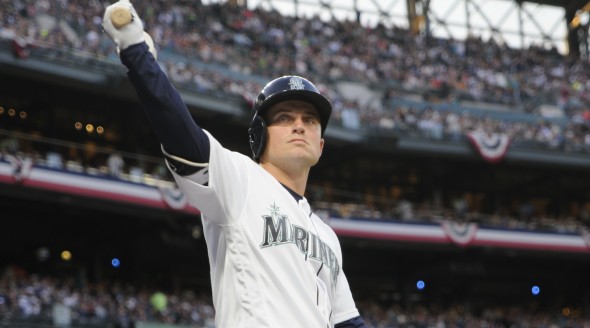 When Wade Miley stepped on the rubber for the Mariners Saturday night at Safeco Field, neither he nor manager Scott Servais imagined he would stay there for all 27 outs. Nine innings later, Miley was still pitching, dealing a 6-0 defeat to the Kansas City Royals (box) that gave Seattle (13-10) its fifth series in a row and earned him his first career complete-game shutout.

“He had it all working,” Servais said. “Back and forth, a mix of speeds, I thought (catcher Chris) Iannetta did a really good job calling the game.

“If you had asked me in the sixth or seventh inning if (Miley) was going to go all nine, I probably would have said that there’s a very small chance of that happening, but he made pitches, and stayed after them. Didn’t walk anybody all night, and I just allowed him to do it.”

Miley (2-2, 5.06) got strong run support early. Seth Smith crushed the first offering from Yordano Ventura 430 feet to right field in the first for his fourth home run of the season. Two walks later, third basemen Kyle Seager sent his fifth homer of the season 397 feet over the right field wall to give the Mariners a 4-0 lead.

From there, Miley hit the cruise control, recording four strikeouts and giving up five hits to deal the Royals (12-11) a fifth consecutive loss. Kansas City’s Mike Moustakas was the only player to reach scoring position after a ground-rule double in the top of the third.

From the fourth inning on, Miley faced two more than the minimum, giving up a single to Lorenzo Cain in the sixth and plunking lefty Alex Gordon in the seventh.

“I was just trying to get us back in the dugout,” Miley said of the accomplishment. “I was trying to get quick outs, and it worked out . . . I didn’t even know (entering the ninth) that I was at 102 pitches. (Servais) came down and asked me how I felt, I said I was good to go.

“I feel like I’m in a really good place right now. I’m able to make pitches and really work down. Elevate when I need to, but if I want to go down (I can). That’s where we’re getting ground balls and really quick outs.”

The 43,444 present rose to their feet and applauded as Miley took the mound for one last go-around. He needed just 12 more pitches to record the final three outs, courtesy of a fly-out, a ground-out to third, and a leaping grab from Seager to keep a line drive from working its way into left field.

Seattle added its fifth run in the bottom of the fourth, when Leonys Martin hit a hard ball to first baseman Eric Hosmer with Seager at third and Iannetta at second. Hosmer gunned the ball home, but catcher Salvador Perez couldn’t get the tag down in time. The final run came in the sixth when reliever Dillon Gee hit Nelson Cruz in the elbow with a pitch with the bases loaded to score Norichika Aoki.

The Mariners have won five series in a row, the first time they have done so since winning six from May 18 to June 11 in 2011. Seattle is 12-4 in its last sixteen games.

“It’s good to win five in a row,” Servais said. “Our club’s playing well, they believe in each other. I think we’re jelling the personalities and showing up. It’s almost contagious how we’re going about our at-bats.

“I feel like we’re going to win every night.”