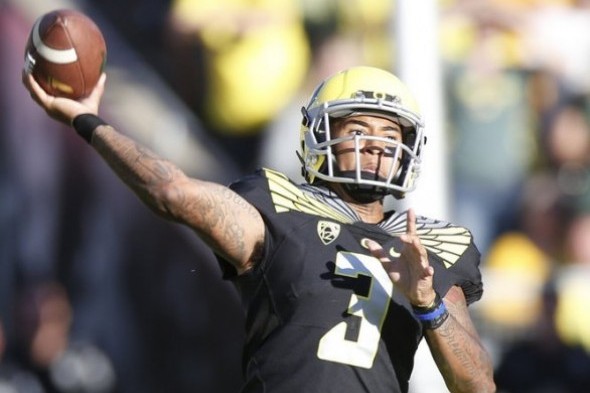 Vernon Adams, who played quarterback last season at Oregon, will get a tryout with the Seahawks. / University of Oregon

The club has not released its list, but from media sources and social media accounts, here’s what is known.

With only one quarterback, Russell Wilson, on the roster following Saturday’s draft, the Seahawks inked Trevone Boykin of Texas Christian and invited former Eastern Washington/Oregon star Vernon Adams to the club’s rookie camp on a tryout basis, which means Adams hasn’t officially signed and can sign with another team before rookie camp.

Undrafted rookies that Seattle has either signed or invited to its rookie camp Friday through Sunday at the VMAC in Renton include:

Vernon Adams, QB, Oregon: Adams lit it up when he played for Eastern Washington, throwing for more than 10,000 yards and 110 touchdowns.  He  transferred to Oregon to replace Marcus Mariota, but his final college season didn’t go as planned as Adams broke his right thumb while playing against his former team. Once healthy, Adams led he Ducks to six consecutive wins and ended the year with 2,643 yards and 26 TD passes. Adams is the same height (5-foot-11) as Russell Wilson, but unlike Wilson, has relatively small hands (9 1/8). Draft guru Gil Brandt calls Adams a “CFL-level quarterback.”

DeAnthony Arnett, WR, Michigan State: The three-year letterman played in 22 career games for the Spartans, catching 12 passes for 193 yards and two touchdowns after his transfer to East Lansing from Tennessee. Arnett (5-11, 184) finished his collegiate career with 36 receptions for 435 yards (12.1 avg.) in 34 games (24 catches for 242 yards in 12 games at Tennessee in 2011).

Trevone Boykin, QB, Texas Christian: Boykin had a spectacular college career: Heisman Trophy finalist and Big 12 Offensive Player of the Year in 2014 (3,901 yards, 33 TDs), and Walter Camp All-America and Davey O’Brien finalist as a senior (3,573 yards, 31 TDs). Like Adams, he’s short (6-0) and has small hands (9 3/8). Boykin also didn’t help himself when he was suspended for the Alamo Bowl after breaking curfew and being arrested for felony assault of an officer in connection with a bar fight.

Brandin Bryant, DT, Florida Atlantic: The 6-3, 300-pound Bryant played in 41 college games, recording 130 tackles and 13.5 sacks. He had his most active game of the 2015 season with five tackles versus Marshall. He posted a career-high eight tackles at East Carolina in 2013.

Deandre Elliot, CB, Colorado State: Elliot was a starter and a reserve during his time in Fort Collins. His most notable play: a 76-yard interception return for a touchdown against Hawaii in 2012. He has the requisite size (6-1, 188) for an NFL corner, but slipped through the draft due to his “lack of recovery speed,” according to NFL.com. With a NFL.com grade of 4.97, he isn’t given much of a chance to make the final 53.

George Fant, TE, Western Kentucky: A native of Bowling Green, KY., the 6-6, 270-pound Fant played basketball for the Hilltoppers before playing tight end on the football team last season. Although he didn’t get drafted, he turned in a remarkable pro day, recording a 37-inch vertical jump and a 4.83 40-yard dash time.

Christian French, LB, Oregon: The 6-5, 250-pound native of Cedar Rapids, IA., played in 43 games for the Ducks, with 78 tackles and 8.5 sacks. He posted a career-high seven tackles at Michigan State last season and a career-high two sacks against the University of Washington as a junior in 2014.

Darvell Harris, CB, North Alabama: A two-year letterman at UNA after transferring from Dodge City (KN.) Community College, Harris (6-1, 184) had three interceptions for 54 return yards last year, helping the Lions finish 9-3 for a share of the Gulf South Conference title and a berth in the Division II playoffs.

Lars Koht, DL, Florida International: Koht, 6-5, 283, appeared in all 12 games for the Panthers, starting in eight. He recorded 47 total tackles (28 solo) with 8.0 tackles for loss, 4.0 sacks and one forced fumble, ranking sixth on the team in total tackles, third in tackles for loss and third in sacks. Koht has a black belt in karate.

Steve Longa, LB, Rutgers: After no team drafted Longa in the first five rounds, he texted his agent and told him he didn’t want to be selected in the sixth or seventh rounds so he could sign with Seattle. “That’s where I’m going to excel,” Konga said via Gannett News Service. Longa started 37 of a possible 38 games for Rutgers and produced three consecutive 100-tackle seasons.

Tre Madden, RB, USC: Due to injuries that cost him two full seasons (2012, 2014), the grandson of former NFL RB Lawrence McCutcheon (briefly a Seahawk) played only 12 college games with one start as a linebacker before his coaches moved him to running back. Last season, Madden responded with 452 yards and five TDs and hit the 100-yard mark twice before suffering a knee injury. Madden has plenty of size (6-0, 233), but his injury history and lack of elite athleticism (NFL.com view) prevented him from being drafted.

Tanner McEvoy, S, Wisconsin: McEvoy began his college career as a quarterback, but was eventually moved to safety. He wasn’t invited to the NFL combine and was unable to run the 40 during Wisconsin’s pro day due to knee tendinitis, which didn’t help his draft stock. But McEvoy is versatile. In November against Rutgers, he ran for a touchdown, intercepted a pass and had a sack.

Lene Maiava, OL, Arizona: Maiava started all 13 games for the Wildcats at right tackle last season on one of the Pac-12’s best offensives. He helped pave the way for 222 yards per game on the ground, third in the conference and 23rd nationally. Arizona’s total offense of 494.9 yards per game ranked third in the league, while the 37.4 points per game was third-highest in school history. Maiava, 6-5, 301, is a native of American Samoa.

Tyvis Powell, S, Ohio State: The 6-3, 217-pounder earned honorable mention All-Big Ten honors last season as he led the Buckeyes with three interceptions and 71 tackles. He has a reputation for making big interceptions in big games. He swiped Michigan’s two-point attempt to win the rivalry game as a freshman in 2013, stole a Hail Mary try by Alabama in the 2014 college football semifinal, and intercepted another pass in Ohio State’s win over Notre Dame in the Fiesta Bowl. Major knock him on: Lack of physicality.

Tani Tupou, DL, Washington: A two-year letterman, Tupou earned second-team All-Pac-12 honors last season after starting all of the Huskies’ 13 games. He recorded 37 tackles, including 5.5 for loss. A native of Marysville and a graduate of Archbishop Murphy, had seven tackles in games against Oregon and California. He also won the Guy Flaherty Award, presented to UW’s Most Inspirational Player.